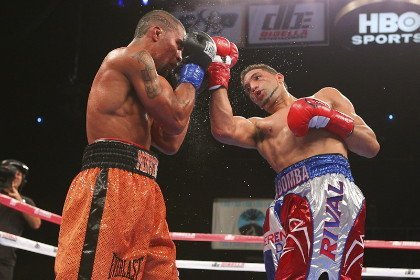 “I was surprised he got out of the first round,” Rodriguez admitted. DBE “He’s definitely a strong kid; tough with raw power but easy to predict. We want any of the top 10 guys, definitely (Kelly) Pavlik. I wanted to send a message and I think my performance speaks for itself.”

“That was the offensive machine Edwin can be that you didn’t see against Donovan George,” Rodriguez’ ecstatic promoter Lou DiBella noted. “He fought a tough kid with an iron chin. He’s ready for Pavlik at 168, or (Lucian) Bute or (Jean) Pascal at 175. I hope HBO brings us the biggest fight because Edwin is ready to step up and be a star.”

“I’m back,” Darchinyan exclaimed. “I feel good at this weight; I feel strong. I worked very hard. He’s a tough kid. I just felt I was in a different class than him.”

“I’m disappointed,” Del Valle remarked. “He’s extremely awkward. I let him impose his style and he got his confidence early. Every time I went inside, he held me. My hat’s off to him. He was the better man tonight.”

In the HBO opening fight, French-Canadian welterweight Antonin Decarie (27-1, 8 KOs), rated No. 7 by the WBC, introduced himself to American fans with a bang, knocking out previously unbeaten Alex Perez (16-1, 9 KOs), of Newark, New Jersey, in the sixth round. Decarie won the first five rounds on two judges’ cards and led 4-1 on the other. Near the end of the sixth round, Decarie caught Perez with a left hook and then a right cross as Perez was rocked. Decare pinned Perez on the ropes and unloaded a series of solid punches until referee Danny Schiavone stopped the fight with six seconds remaining in the round. Decarie won the vacant North American Boxing Association (NABF) title to go with his WBC International that was not on the line.

“I feel awesome,” Decarie said after the fight. “We had a great training camp. The right hand was something we worked on. I knew I could land the right and once I started landing it I knew I could hurt him. I give a lot of credit to Alex for taking the fight. This was the outcome we expected. I’m ready for any welterweight in the world and I can’t wait to be back on HBO.”

World-rated cruiserweight Issac “Golden Boy” Chilemba (20-1-1, 9 KOs), fighting out of South Africa, turned in a workmanlike effort against veteran Rayco “War” Saunders (22-17-2, 9 KOs), pitching a shutout en route to a eight-round win by unanimous decision (80-72 X 3). Chilemba originally was supposed to fight on the HBO broadcast against undefeated, two-time world champion Zsolt Erdei, who was forced to withdraw with a rib injury. Chilemba is rated in the top 15 by all four major world boxing organizations, as high as No. 5 by the IBF, as well as No. 9 by The Ring Magazine.