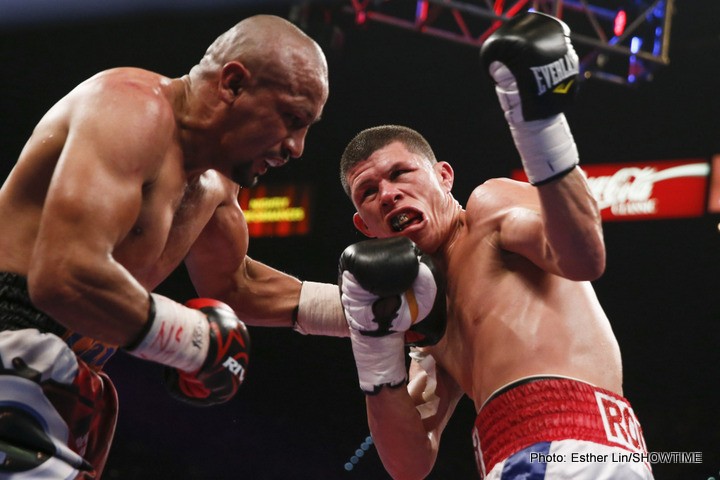 It is an incredible fight for Rocky Martinez. It has been an opportunity we have been looking for a long time. As everyone knows, Rocky Martinez has already been a world champion three times. He has a lot of experience and he has been looking for this type of opportunity. Being the main event on HBO will give him a lot of exposure and a win over Lomachenko will be incredible for his career. In our camp, we are really confident about this fight — confident that we can win this fight. Rocky is the bigger guy and the guy with the experience and he is hungry. Also to fight on the weekend of the Puerto Rican Day Parade is an incredible thing for Rocky Martinez.

ROCKY MARTINEZ: I think it is a great fight for me. Many people don’t believe that I can beat this guy but I feel that I am the man in this fight. I am the stronger guy and have the experience and I prepare myself very well physically and mentally and I am ready for this fight.

What kind of challenges does Lomachenko bring to the ring?

How do you feel fighting as the main event on Puerto Rican Day Parade weekend?

ROCKY MARTINEZ: I am very happy to be on this show on the day before the Puerto Rican Day Parade and to fight in New York is incredible. I will win the fight on Saturday and give the victory to all of my Puerto Rican fans — I’m very happy

Is this the biggest fight of your career?

ROCKY MARTINEZ: This is one of the biggest fights. I think this will be the fight that really helps me to go to another level. It is not an impossible fight for me. I think I can win this fight.

You had an injury prior to you last scheduled fight. Are you 100% now?

ROCKY MARTINEZ: I feel fine with my hands and everything is OK right now. These things happen in boxing. You use your hands all the time in boxing so it is very common that something like this can happen. I am ready and I am 100% for the fight on June 11.

PETER RIVERA: We had a mandatory fight against Miguel Berchelt and the fight didn’t happen so Berchelt fought for the interim world title and won. Berchelt became an Interim World Champion and is no longer the mandatory challenger. As an interim champion he will fight the champion at some time but not urgently. Bob and HBO came with this opportunity and we liked it and we said let’s make this fight happen, then if we need to fight Berchelt we will fight him.

Who do you think will win Salido-Vargas?

Do you think Vargas should be in the fight since he failed the drug test?

All the talk about Lomachenko and the chance for him to make history…does that motivate you?

You have been boxing more technically in the past couple of fights. Are you going to go back to being a pressure fighter again?

You have had some trouble making the weight in your last couple of fights. How is that now?

ROCKY MARTINEZ: That fight was in Las Vegas. This fight is much closer to Puerto Rico. I can fly in for this fight on Tuesday and get accustomed to the new surroundings. It is easier for me to make weight because I am in Puerto Rico longer. That is the best thing about this fight for me.

Did you learn anything watching the last Lomachenko fight?

ROCKY MARTINEZ: Yes, the key to the fight is not letting Lomachenko think. You have to pressure him and attack him because he is a very good technical boxer and he knows how to attack. So when he wants to come in you have to be smart about it and let him come in and exchange but the key is attacking the body and not let him think.

What do you think about the comments made by Lomachenko on Wednesday?

ROCKY MARTINEZ: Lomachenko can say whatever he wants. I just prepare myself for this fight. I am ready. He can feel confident but I am very confident. I am the champion and I will be ready for the fight on Saturday, June 11

How was training camp and sparring with Jose Pedraza?

ROCKY MARTINEZ: One of the best things that happened to me was having Jose Pedraza as a sparring partner. He really helped me a lot. He’s a great fighter and we worked very hard all training camp and once again it’s great to have a fighter like him to help me. I will have no excuses on June 11. I am 100% ready and I’m very confident that I’m going to win this fight. He helped me a lot.

If your opponent failed a drug test, would you continue with the fight?

ROCKY MARTINEZ: It would definitely be an illegal fight if that happened. Maybe I wouldn’t fight a guy that failed a drug test but you never know, this is a business and people are paying money and maybe they are paying more money than you would get otherwise so that affects it.

PETER RIVERA: Definitely it depends upon the kind of drug test that the guy really failed. As a promoter, I would look at how much of an advantage the drug would give the fighter. Maybe it’s the kind of drug that he is using to lose weight. I would check the kind of drug that it is and why the guy is using it and based on that I would make a decision. But in this sport we don’t need these types of decisions. It’s really weird because Vargas was the one saying to Salido about this [testing], then he is the one that it happened to.

So you understand why Salido went forward with the fight?

Do you have drug testing for this fight?

PETER RIVERA: For this fight we have the testing that the commission does before and after the fight.

Where does Lomachenko rank among your opponents?

ROCKY MARTINEZ: He is one of the best fighters that I will fight in my life. He’s a great fighter and he is on the top of my list.

What would it mean to win this fight, it being Puerto Rican weekend on top of it being Lomachenko?

Will you watch the Vargas-Salido fight?

Where does Rocky stand in Puerto Rican boxing lore?

PETER RIVERA: Everybody knows that Puerto Rico has a big boxing culture and everybody knows the fighters on the island because Rocky has been a world champion three times. It’s very difficult to be a world champion once so just imagine how hard it is to be champion three times. People recognize him as a great fighter and someone that has a lot of guts and a guy that leaves everything in the ring. That’s why people love him a lot. He is also a humble person and a nice guy so people like him a lot and all of Puerto Rico will be supporting him on June 11.

Is there an issue with Rocky’s weight?

PETER RIVERA: No, no one has asked that and no, we don’t have problem with that. He answered that question in Puerto Rico yesterday about what Lomachenko said, but Rocky is a professional guy and he’s been at 130 his whole life. He is already 135 so he is very close to the weight so he is doing very well. We don’t see any problem at the weigh-in on June 10, the day before the fight. Whoever is talking about that rumor — it is not really true — we don’t have any problem. Not with us.

Do you think Rocky would do what Salido did – try to rough Lomachenko up a little bit?

ROCKY MARTINEZ: No, no ,no, I’m not going to do that. I have my own fight plan for that night and of course I can’t tell you what I am going to do because that is part of my plan but I don’t plan on doing anything like that.

Do you consider yourself or Pedraza the best 130-pounder in Puerto Rico?

ROCKY MARTINEZ: Both of us are great champions. We have different styles so we are different fighters so I can’t tell you who is the best between us.

Is that a fight that could happen — a title unification?

ROCKY MARTINEZ: I don’t really think that I could fight him in the future. I think he is the only fighter that I would not fight because we are really close friends. I understand this is a business but that is one fight I would not take.

ROCKY MARTINEZ: Once again I am very happy for this opportunity and on June 11 boxing fans and all fans in Puerto Rico will see me as world champion again and I will remain champion on that night.

Three-time world champion ROMAN “Rocky” MARTINEZ (29-2-3, 17 KOs), from Vega Baja, Puerto Rico, and World Boxing Organization (WBO) featherweight world champion VASYL LOMACHENKO (5-1, 3 KOs), of Odessa, Ukraine, will go mano a mano for Martinez’s WBO junior lightweight world title and the boxing gem of Puerto Rico, FELIX “El Diamante” VERDEJO (21-0, 14 KOs), of San Juan, Puerto Rico, will risk his WBO Latino lightweight crown, undefeated record and No. 2 world rating against JUAN JOSE MARTINEZ (25-2, 17 KOs), of Mexico City, Mexico, in the co-main event of a championship doubleheader Next Saturday! June 11 — one day before the famed Puerto Rican Day Parade — at The Theater at Madison Square Garden. The two bouts, scheduled for 12 and 10 rounds, respectively, will be televised live on HBO beginning at 10:00 p.m. ET/PT. The non-televised undercard will feature the U.S. debut of two-time Olympic gold medalist and three-time World Amateur Champion ZOU SHIMING (7-1, 2 KOs), from The Peoples Republic of China. Zou will be defending his WBO International flyweight title and No. 2 world rating in a 10-round bout against JOZSEF AJTAI (15-2, 10 KOs), of Hungary.