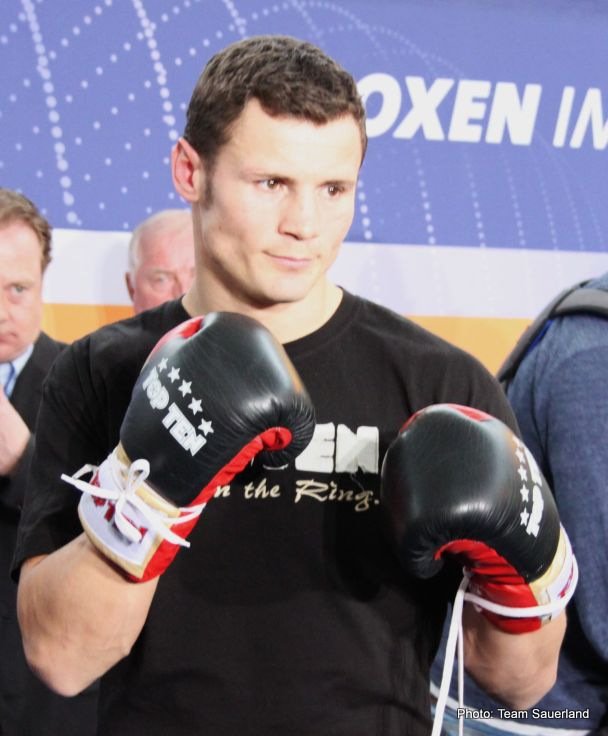 Stieglitz is still reeling from having lost his WBO strap in his last fight against Arthur Abraham four months ago in July in losing a 12 round split decision. Stieglitz wants another chance against Abraham to try and regain his WBO strap, but for that fight to happen, Stieglitz needs to beat Khomitsky tonight and possibly Gilberto Ramirez if the WBO forces him to fight in a WBO eliminator bout before he can fight Abraham again.

Stieglitz will have his hands full if he’s forced to fight the 23-year-old Ramirez in a WBO 168 pound eliminator, believe me. Somehow I can see Stieglitz getting another title shot against Abraham without having to go that route. I could be wrong, but I see Stieglitz being able to skip past the dangerous Ramirez to get his 4th and hopefully final fight against Abraham. The two have already fought each other three times since 2012.

Khomitsky, 39, is fighting at a high level at this point in his career after having beaten Frank Buglioni in his last fight in June, and before that being arguably robbed of a win in his fight against Martin Murray last December. Murray was given an 8 round points decision, but many boxing fans believe that Khomitsky deserved to get his hand raised in that fight because he landed the cleaner shots.

This is going to be a difficult fight for Khomitsky to try and win tonight against Stieglitz, because he’s the B-side in this fight and he’s fighting him in Germany. Khomitsky is from Belarus, so you can’t expect him to get the nod if the fight is anywhere close tonight.

Stieglitz is the home fighter, and you’ve got to look at that as him having an automatic 4 round lead at the start of the fight. It’s going to be up to Khomitsky to see if he can catch up to Stieglitz and take the decision or better yet, score a stoppage to make sure there’s no controversy.