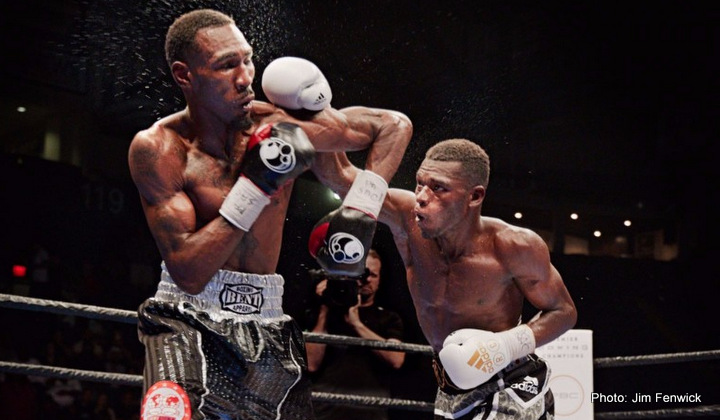 “We’re thrilled to work with Mauricio Sulaiman and the World Boxing Council to present this outstanding night of boxing on March 11,” said MICHAEL AMOO-BEDIAKO of Streetwise Promotions. “It’s an honor to be part of Ghana’s 60th Independent Anniversary.”

Commey had a very hard luck 2016 campaign but will be looking to kick off 2017 in style in his home country.

On September 19, 2016, Commey traveled to Reading, Pennsylvania to challenge Robert Easter, Jr. for the vacant IBF Lightweight World Title, losing a very hard fought 12-round split decision which included the ninth round, a stanza lauded by many in the international boxing media as the “Round of the Year”.

Commey followed up that valiant performance by fighting Denis Shafikov on December 2, 2016 in Moscow, Russia. Fighting again in epic 12-round battle, Commey came up just short losing a split decision.

The 29-year-old Slimani is coming off a very successful 2016 with three victories. Fighting mostly in Belgium throughout his seven-year professional career, Slimani recently defeated Argentinian veteran Vicente Martin Rodriguez in a ten round unanimous decision on November 11 in Zwevezele, Belgium.

Coming back from a year-long layoff due to injuries, Lawson will be looking to regain his top contender status in the welterweight division.

Following excellent victories over fellow contenders Ray Narh and Breidis Prescott, Lawson was stopped in the 10th round against Kevin Bizier on November 7, 2015, when he suffered a broken jaw.

The upset minded Mullings will be looking to stay in the win column currently riding a modest two-bout winning streak.

Rounding out the headlining bouts on the outstanding card, undefeated and world ranked bantamweight prospect DUKE “The Baby Faced Terminator” MICAH, (19-0-0, 17 KO’s) will clash with JONATHAN “El Fenix” AGUILAR, (17-4-0, 15 KO’s) of Chiapas, Mexico, in a 12-round bout for the WBC International Silver Bantamweight Title.

The 25-year-old Micah has thrilled crowds in the United Kingdom and Ghana since turning professional four years ago.

Most recently Micah won the vacant Commonwealth (British Empire) Bantamweight Title with a brilliant 12-round decision over Matthew Chanda on November 12, 2016.

Just 23-years-old, the battle tested Aguilar is riding an 11-bout winning streak dating back to May 2014. This will be his first fight outside of Mexico.

More details on further fights for this sensational evening will be announced shortly.

All three will be fighting for World Boxing Council (WBC) International Titles to celebrate the country’s independence anniversary on March 6.

This show will mark the beginning of a committed collaboration between the CEOs of Streetwise Promotions MICHAEL AMOO-BEDIAKO and Errol Hawk Sports Management JACOB ZWENNES to provide a global platform for young and talented Ghanaian boxers to showcase their skills on the world stage. AMOO-BEDIAKO noted the challenges Ghanaian boxers faced in recent years when they had to travel abroad to gain recognition.

Said AMOO-BEDIAKO “When I attended the recent WBC convention in Miami, I spoke to the WBC President MAURICIO SULAIMAN and Vice-Presidents MAURO BETTI and HOUCINE HOUICHI about Africa’s predicaments and they agreed with me and echoed my sentiments. They have agreed to support the idea of making Ghana an international destination for boxing and have been instrumental in providing their international titles to grace this show in March.”

Stated SULAIMAN, “The new era of boxing in Africa is here. The WBC stands tall and proud to support the efforts of Streetwise Promotions and Errol Hawk Management and celebrate this unbelievable boxing card in which three WBC International belts will be contested. Africa has always been a top priority to the WBC and my dear father JOSE SULAIMAN and Ghana has the inspiration of great heroes from the past like NANA KONADU, IKE QUARTEY and the greatest, The Professor, our hero AZUMAH NELSON.”

Richard Commey is very unlucky not to count himself a world champion after two controversial split decision verdicts against him in 2016. He will be fighting for the first time since being released by his former promoters Sauerland and looking to get back to fighting for a world title in the near future.

Frederick Lawson will also be on the comeback trail to claim his rightful position in the welterweight division after fully recovering from an injury sustained during his last fight in November 2015.

Lastly the infectious Duke “The Baby Faced Terminator” Micah, who is the current Commonwealth (British Empire) Bantamweight Champion is set to electrify the Bukom fight night and serve notice to the bantamweight division in 2017 that the kid dynamite has landed on the world stage.

More information on this outstanding event will be announced shortly.