It seems Jeff Horn can forget all about being a middleweight. Earlier today in Bendingo, Australia, Michael Zerafa stopped Horn in a ninth-round upset win. Zerafa, a pretty big underdog Horn was looking at using as a mere test at 160, dropped the former WBO welterweight champ in rounds two and nine; getting the stoppage victory at 2:24 of the 9th.

Zerefa, best known for his losing fights to Peter Quillin and Kell Brook, came out aggressive, as he said he would being the naturally bigger and stronger man, and he had success with his right hand. A clash of heads saw Horn pick up a cut over his left eye and it looked for a time as though the injury might be bad enough to stop the fight. Instead the action raged on, and Horn, though having his moments, generally got the worst of it.

Zerafa had to take some hurt himself, yet he had a good chin today, as he had previously showed against Brook down a few pounds. The end was brutal, Horn taking some hellacious shots, Zerafa all over him and refusing to stop chucking leather. Horn had been promised a fight with Ryota Murata if he won today, now all of that is out of the window. Zerafa can be expected to move on off this big win and get himself another, even bigger opportunity. He sure deserves it.

What now for Horn though? He can forget all about that hoped for return fight with superstar Manny Pacquiao, that’s for absolute certain. Can Horn go back down in weight? Did the loss he suffered at the hands of Terence Crawford take something substantial out of him? 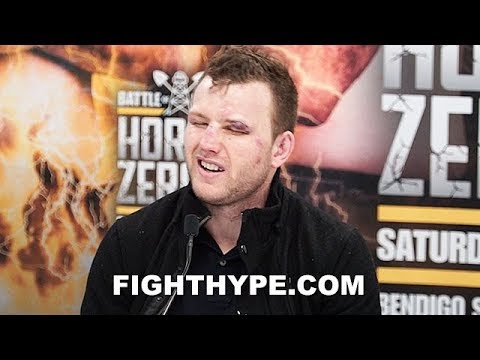 Only time will tell. For now, Michael Zerafa is the king of the middleweights in the country of Australia. Today’s quite thrilling battle was a big deal in Oz, the fight going out on pay-per-view in Australia. The fans got their money’s worth; both those in attendance and those who watched at home.