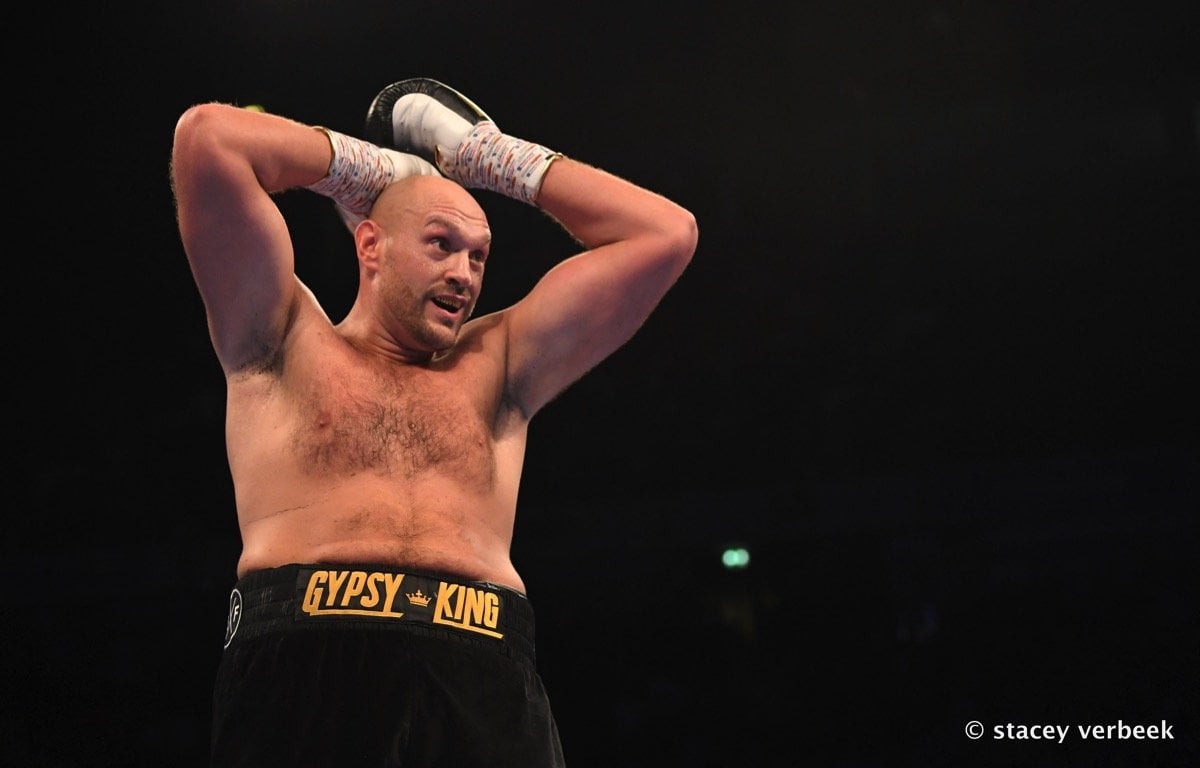 Tyson Fury (26-0, 19 KOs) looked worse than expected in in his comeback on Saturday night in stopping Sefer Seferi (23-2, 21 KOs) in a 4th round TKO when the Albanian decided he’d had enough after the round ended at the Manchester Arena in Manchester, England.

The former undisputed heavyweight world champion Fury clowned through the first two rounds before getting serious when his badly over-matched opponent Seferi in round 3. The fight resembled a staged exhibition match more so than a boxing event.

Seferi quit and wasn’t hurt. Fury didn’t do much of anything to Seferi other than land a few hard shots in each round. Seferi’s face wasn’t swollen and he hadn’t been knocked down or cut in the fight at the point that he quit after round 4.

Seferi was doing most of the attacking in rounds 1 and 2, as Fury was content to clown, look at the crowd and hold his arms out to his sides. At one point, Fury turned around and stared at a fight in the audience. Seferi could have went after Fury and brained him if he had wanted, but he was simply glad to be there. Seferi just seemed happy to have been given the opportunity to fight Fury, so he likely didn’t want to show that he was ungrateful by looking to take advantage of the situation.

Having shed approximately 110 lbs. in getting ready for his comeback, the 276 lb. Fury used his long reach to his Seferi with right hands in rounds 3 and 4. Fury was unable to connect with his jabs and left hooks. Fury didn’t have the accuracy to connect with more than occasional hard shot due to the nonstop movement of the 39-year-old Seferi.

With the victory, Fury is still unbeaten for now, and he can keep trash talking for a little while longer. However, Fury is going to need to make dramatic improvements for him to have any chance against the likes of Anthony Joshua and Deontay Wilder, because he lacks the hand speed and power to compete with those fighters. It’s safe to assume that Wilder and Joshua wouldn’t respect Fury’s power the way that Seferi did tonight. Those guys would walk Fury down and bounce right hands off his head to knock him out.

In looking at how bad Seferi was tonight, it’s easy to see why Fury picked him out himself, because he would lose to the top guys – Oleksandr Usyk, Murat Gassiev, Mairis Briedis, and Yunier Dorticos – in the cruiserweight division. Of course, we shouldn’t even be talking about Fury fighting cruiserweights. As big as Fury is, he should have been fighting a heavyweight tonight, but obviously he felt he needed every advantage in the book to have a chance of winning the fight.

Fury, 29, probably needs at least four more tune-up fights before he starts seriously thinking of taking on someone like former WBC cruiserweight champion Tony Bellew, who he’s been talking of wanting to fight. If this head been the 34-year-old Bellew inside the ring tonight, he would have knocked Fury out.

At times Fury looked like the fighter that had beaten Wladimir Klitschko 2 ½ years ago in November 2015. When Fury started landing right hands in rounds 3 and 4, he looked momentarily like the fighter that had beaten Wladimir. Never the less, Fury was much slower, flabby around the midsection, and not nearly as sharp as he’d been against Klitschko. It’s lucky for Fury that Seferi didn’t have better conditioning and punching power because he would have made a mess of Fury. Someone like Murat

Gassiev would have left Fury in a pile rubble on the canvas, and I’m not sure if it would have made a difference if he were in shape or not. Fury has lost too much from his game to beat a good cruiserweight or heavyweight.