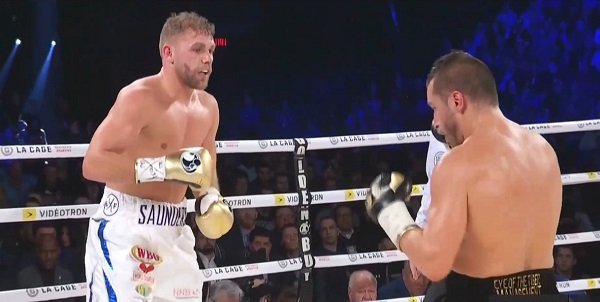 Saunders totally dominated Lemieux and made him look like an ape in the ring.

Saunders did a little gloating after the fight in talking to the crowd about his win.

“I know you’re booing me because I whooped your fighter’s ass,” said Saunders. “I wouldn’t have come over here if I thought I’d get beat…I’m a different animal now. I wanted to put it on Lemieux…Canelo fight me NOW!”

Golovkin is looking to get a rematch with Saul Canelo Alvarez. If Golovkin wins that fight, he could go after Saunders if he’s still the champion. Saunders needs to keep fighting though. He rarely fights nowadays in becoming once a year fighter. He can’t just sit and wait for the Golovkin vs. Canelo rematch to get over with, as that fight won’t take place for another 5 months.

“I wasn’t at my best,” said Lemieux. “As of the second round I couldn’t use my left hand the way I wanted to. He was on the run and I had difficulty throwing my shots. I guess his strategy to win is to run away from fighters instead of fighting. If that’s the way you want to win then, hey, congratulations.”

Lemieux had problems hitting Saunders even in round 1, so the excuse about the left hand isn’t a good one.