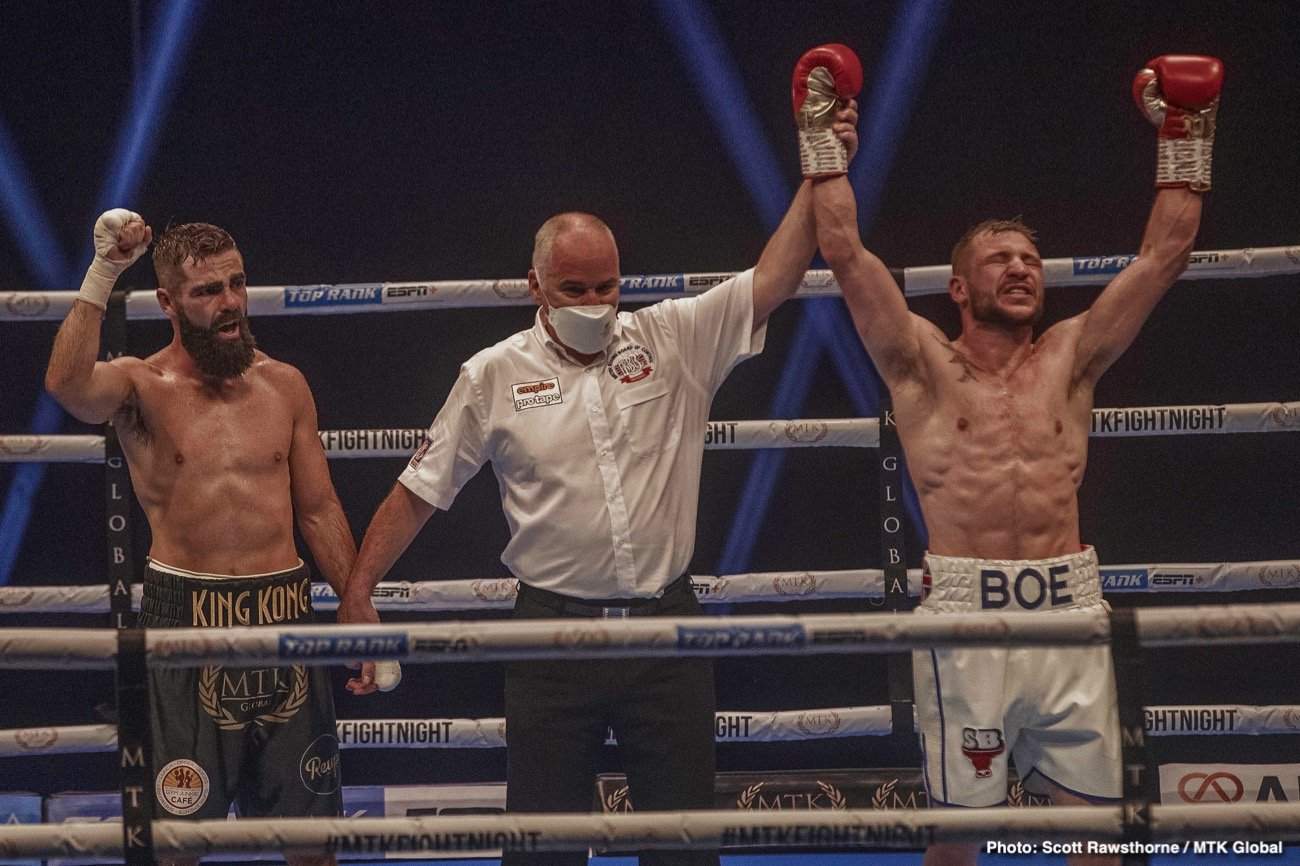 The two men met at Production Park Studios in Wakefield on a packed show that was broadcast live in the US on ESPN+ in association with Top Rank and worldwide on IFL TV, and they treated those watching around the world to a fantastic bout.

Hughes claimed the hard-fought win, while elsewhere on the card there were victories for Sean McComb, Sahir Iqbal, Pierce O’Leary and Craig MacIntyre.

It was clear from the offset that it would be a very close contest, with both Hughes and Carroll getting the better of each other at certain stages of the fight.

Each round was extremely close and could have gone either way, but in the end it was Hughes that was given the nod after a very tight decision.

Read:  Anthony Joshua: "I'm Going To Become Three-Time Heavyweight Champion Of The World – Whether People Like It Or Not"

It was a brilliant fight to end a fantastic #MTKFightNight, and despite the loss, Carroll will no doubt come again.

Hughes said: “It’s about time. I’ve been in with all of the top boys and pushed them all the way, and I always thought am I just going to be a nearly man. I knew I always had it and thought would I ever pull it off, and tonight’s the night.

“Jono is world class, he just missed out on a world title and has been at that level for a while. Jono brought the best out of me so thanks to him, he was gracious in defeat and is humble, so I really like him.”

Carroll said: “It was a great fight and very competitive. Maxi’s range is better than I thought it was. There were a few things that went wrong but I won’t give excuses for my loss.

“There’s loads of little things that went wrong, but that’s not taking away from Maxi’s win because he did very well tonight. I couldn’t find my rhythm and my timing wasn’t there tonight. It was a good fight though and I enjoyed it.”

Both men pushed the pace during all ten rounds, but McComb managed to land the more impressive and eye-catching punches, using his elite skills to maximum effect.

In the end he was able to secure a dominant win, with the three judges scoring the fight widely in his favour.

Read:  Amir Khan on Why He Took “Crazy” Fight With Canelo: “Floyd Mayweather Was Being A P***y

McComb said: “I feel very fortunate to be out during lockdown. Everybody has done a tremendous job with this event, and I’m very blessed to be back out and showcasing my skills.

“I have a fantastic nutritionist, and now the plan is to drop to lightweight, and that’s a great weight class. I’m happy to fight anybody. Bang bang gravy chip!”

It was a back and forth contest throughout the eight competitive rounds, with both men landing powerful shots that looked to trouble the other.

Iqbal appeared to be getting off the cleaner work, and the judges agreed, as he was awarded the decision after eight rounds to become the new WBC World Youth welterweight champion, a belt previously held by boxing superstar Saul ‘Canelo’ Alvarez.

Iqbal said: “It feels great to win. Over lockdown everyone was taking time off but I didn’t stop. I want to thank my brother and my coach Johnney Roye because they push me constantly all the time, and it’s paid off.

“The plan was to get in there and in the middle rounds put it on him, but I also got on the jab and moved and outboxed him. For this to be my first title it shows where I’m going, some big names have held this belt, and that’s where I want to get to.”

Read:  Claressa Shields-Savannah Marshall: “I Would Really Compare It To Sugar Ray Leonard versus Tommy Hearns”

Dublin sensation Pierce O’Leary (5-0, 2 KOs) proved yet again just why he is touted as a major star for the future, as he stopped Jacob Quinn (4-1) in a fantastic battle of undefeated fighters.

O’Leary displayed his elite striking skills in the fight, landing a series of fantastic shots, working both the body and the head. Quinn appeared to suffer an ear injury heading into the fourth round, and it didn’t take O’Leary long to capitalise, landing a massive left hook which sent Quinn to the canvas.

He was able to get up to his feet before the count of ten, but the referee had seen enough, waving off the fight and handing O’Leary a brilliant win.

O’Leary said: “It was tremendous to be back out there after five months. I couldn’t be happier. My preparation went really well and I had nine hard weeks of solid training after moving with my new trainer Al Smith in London.

“I’ve been getting top quality sparring and it’s been amazing. All of my fans will be at home watching the fight, so thanks to everybody for the support, it means a lot to me.”

It was a fantastic return to the ring from Glasgow’s Craig MacIntyre (12-0-1, 5 KOs) after 14 months out, as picked up an extremely impressive fifth round stoppage win over Ishmael Ellis (11-3).

MacIntyre was in control during the majority of the fight, landing a number of solid shots and earning a knockdown in round four. Ellis was able to recover, but MacIntyre continued his onslaught, forcing the referee to jump in during the fifth round and bring a stop to the contest.

MacIntyre said: “It felt really good to be back in there. I was really pleased when I got the phone call from MTK as a lot of boxers won’t be able to box at the moment. MTK have three shows coming up, so I was delighted to be one of the fighters lucky enough to return.

“I’ve been working hard in the gym and I’ve been consistent. My coach Peter Lynch and my team-mate Kieran Smith have been pushing me hard in the gym, so they keep me at my very best. Now I just want to kick on and hopefully keep climbing the rankings and get my opportunity.

“We just lost my dad at the end of last year, so I need to say thank you to my mum too for being so supportive over the last few months.”