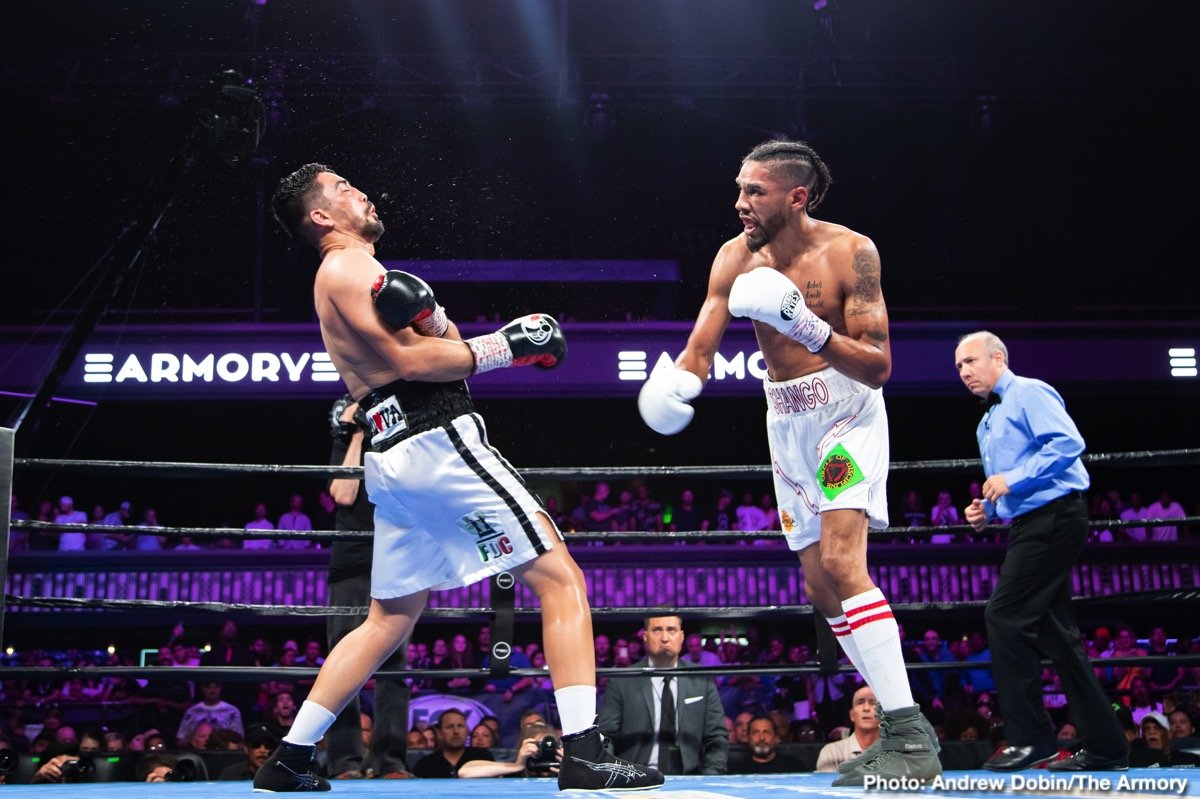 “It was electric in here,” said James. “There’s no better place to fight than The Armory in Minneapolis. You can tell watching it on TV across the nation. This is a new home for boxing.”

James looked to use his height and reach early to jab the hard-charging former world champion DeMarco, but in round two DeMarco hurt James against the ropes and teed off against the hometown favorite. James was able to survive and land big shots of his own in an exciting round that set the tone for the rest of the 10-round duel. The fighters combined to land 45 power punches in the frame, according to CompuBox.

“I listened to my corner and adjusted when I had to adjust,” said James. “He was a strong fighter and a former world champion, but we stepped it up and got the win. DeMarco just had a certain type of will power that separates the great fighters. A lot of fighters have skill, but that will power separates him from the mediocre ones. We both bit down for 10 rounds.”

The six-foot-two James began to employ right uppercuts to his aggressive southpaw opponent, while also turning away after landing, forcing his opponent to reset his attack. That was successful in scoring in his favor, but not in keeping DeMarco from coming forward.

“It was a very difficult fight, said DeMarco. “I felt good throughout the whole fight. Everybody won, especially the fans. I ended up fighting his rhythm and I hurt him a few times, but he’s a great man and a great fighter.”

“Being one of the taller fighters in the division, opponents have to put pressure on me,” said James. “So I have to have good footwork to keep him chasing me. When they’re chasing me, that’s when they make mistakes.”

James controlled the middle rounds, but in round seven the two again went toe-to-toe for almost the entire three minutes, leaving the crowd on their feet and roaring in approval. They combined to land 50 power punches in the round.

“We practice being up against the ropes and how to handle those situations,” said James. “That’s a part of the game. You don’t get mad, you get even. I knew he was going to be tough and come with some spunk. I was cracking him, but he was just eating them. I think I got his respect.”

In the end, James’ activity was part of the difference in the fight as he out threw his opponent 855 to 496, and out landed him 238 to 135. After 10 rounds of action, James left his hometown fans happy by earning the unanimous decision by the score of 98-92 three times.

“I’ve got Minnesota on my back and you know I’m always going to show out for you,” said James. “I’m ready for the title fight, who’s going to give me the shot? I’m ready for anyone. My time is now.”

“It was a tight fight, but I know I could have done more to earn the victory,” said DeMarco. “He deserved the decision. You have to be a good winner and a good loser. I’m thankful for the opportunity to give the fans a great show.”

The co-main event saw an exciting back and forth heavyweight battle that ended when former title challenger Gerald “El Gallo Negro” Washington (20-3-1, 12 KOs) landed a perfect right hand that knocked out Robert Helenius (28-3, 17 KOs) in the eighth round.

“I’ve been going between trainers and between styles my last few fights, but what got me through this fight tonight was just sticking with it and pushing through everything and gutting it out,” said Washington. “I just wanted to put it all together. It took me a while to get going and we had been working on that straight one-two, and it landed.”

The contest featured both men controlling the fights for portions of the action, with Washington focusing on throwing combinations off of his jab, and Helenius fighting effectively on the inside.

As the fight went on, Washington began to bleed from his nose, while Washington began to swell around his right eye as both men took punishment. After losing rounds three, four and five on all three judges’ cards, Helenius fought back to win both the sixth and the seventh round according to the judges.

Late in round eight, it was Washington who eventually landed the decisive blow, as a clean right hand to the head sent Helenius tumbling to the mat, with the fight eventually being waived off by referee Gary Miezwa, 2:32 into the round. Heading into the eighth round, Helenius led 67-66 on two judges’ cards, and trailed 66-67 on the third card.

“I kept trying to throw the overhand and he kept cuffing down to protect from it,” said Washington. “I put a couple good punches together and someone from my team yelled that he was hurt. So at that point I just tried to stay on him and not let him get away, then I caught him pulling out.”

“I’m very disappointed in my performance,” said Helenius, who was making his U.S. debut. “I came to win and I thought I had him. He clipped me and that surprised me. I have to think about what’s next and take it day by day.”

Martin used his southpaw stance to land strong left hands early on Martz and causing his right eye to swell in round two. Martz tried to tie up Martin, and eventually had some success on offense landing several clean shots that got Martin’s attention, even if they didn’t hurt him.

“At one point I wasn’t relaxed like I should have been,” said Martin. “He threw a good flurry on me in the second round and that woke me up. I was a little stiff, but as we got going I knew I could go through him.”

“I definitely came to fight and I was trying to win,” said Martz. “I started to take some hard shots and they added up. He definitely hits hard.”

In round four Martin clipped Martz in the opening moments, forcing him to retreat before Martin followed up with a body shot that put his opponent on the canvas. Martz got up and continued to try to survive and hold, but a strong combination punctuated by another punishing shot put Martz on the mat again and forced referee Celestino Ruiz to halt the bout 2:03 into the round.

“I told my team that I wanted to stop him with a body shot, so I was focused on that and happy to get it done,” said Martin. “I just want to keep learning and become a complete fighter. I want to be able to dig to the body and fight on the inside and learn everything technical that I can. I want to be like the LeBron James of boxing, in that I’m a total student of the sport.”

“He threw some good shots to the body and that’s kind of what wore me out,” said Martz. “I’ll get in the gym and get better and be back soon”

The southpaw Perrella was effective early, leading his offense with straight left hands, as Dolton mostly tried to counter Perrella with right hooks and uppercuts. In round two, Perrella landed two straight left hands in the middle and then at the end of the round that hurt Dolton and forced him to retreat to the ropes.

“We were ready for whatever Dolton brought,” said Perrella. “I have so many dimensions to my game. My team works with me on different styles and it was hard to say how he would come to fight. I figured he’d come with hard feints and pressure, but I knew my strength and my inside work would wear him out.

“We figured we would get the stoppage and hurt him. We’ve gained a lot of strength in the gym. I just knew that if I kept boxing him and breaking him down, I’d know when to go for the finish.”

Perrella began to go for the stoppage early in the third round, quickly backing up Dolton to the ropes before unloading with a flurry of combinations. After sustaining the offense for more than the first minute of the round, referee Gary Miezwa halted the bout at 1:24, giving Perrella the TKO victory.

“This feels amazing, and if any other welterweights want this smoke, they’re going to need some cough drops afterwards,” said Perrella, who was then asked about a potential fight with Jamal James by FOX Sports reporter Jordan Hardy. “If my team wants to do it, I’d love to fight Jamal James next. He’s a great fighter who I respect. That would be a great showdown and I’m ready for it.” 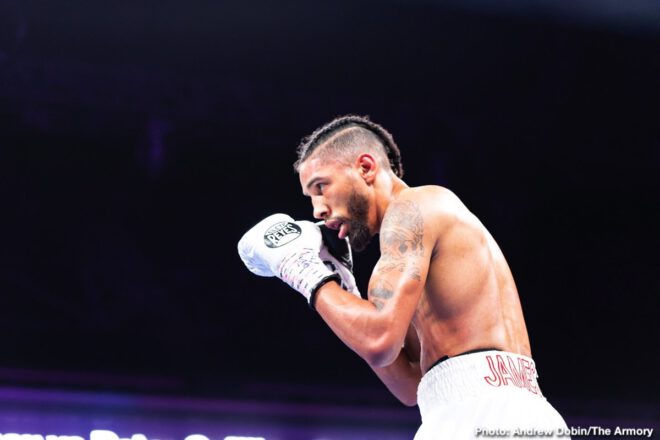 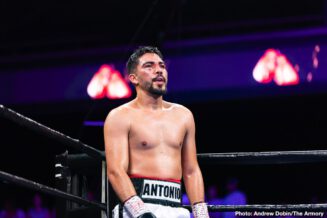 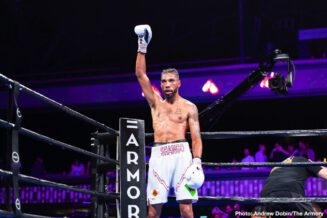 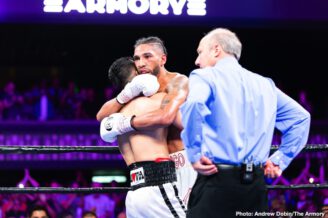 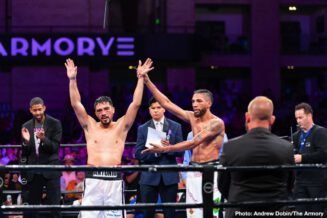 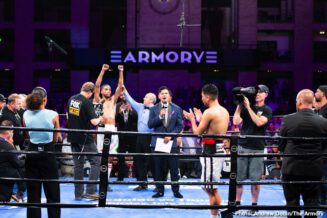 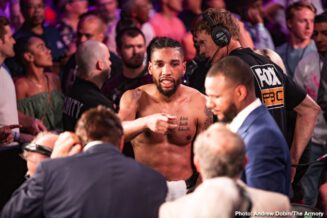 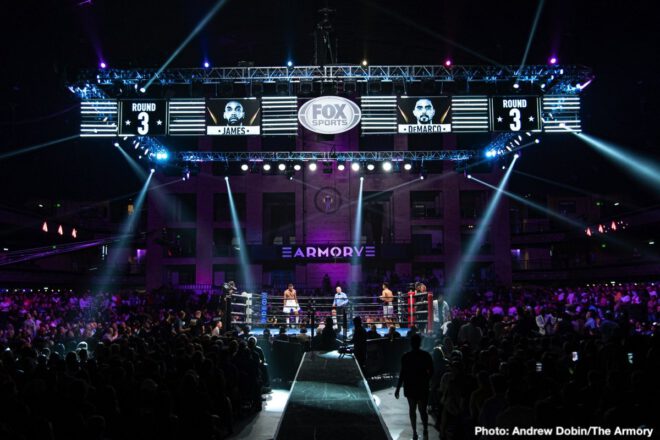 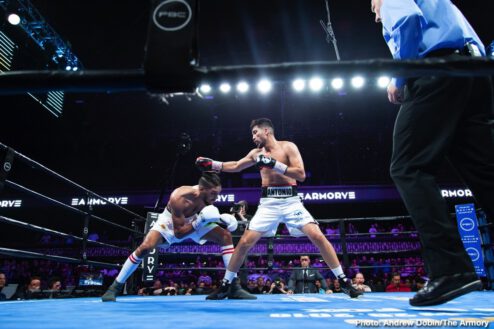 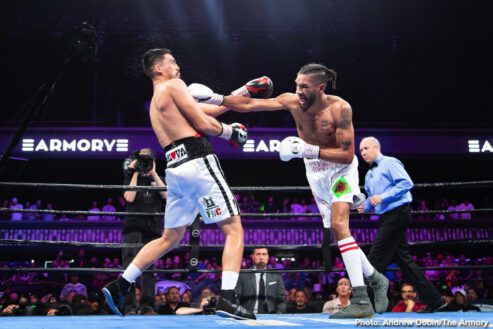 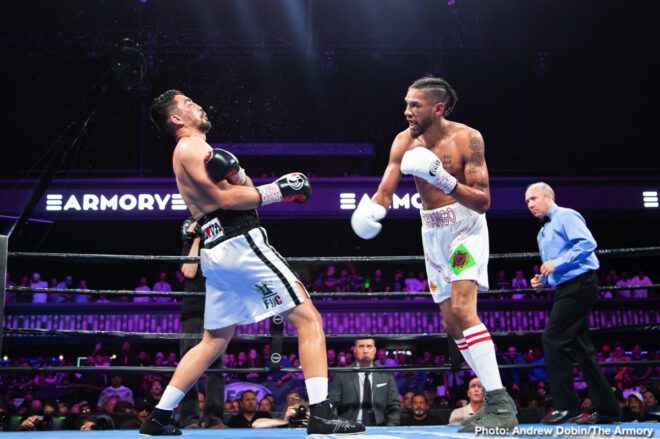 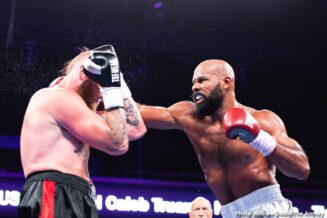 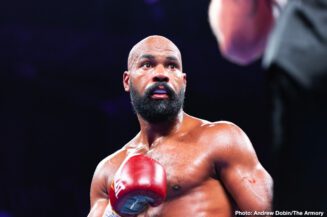 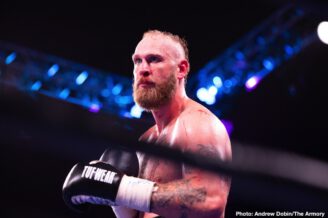 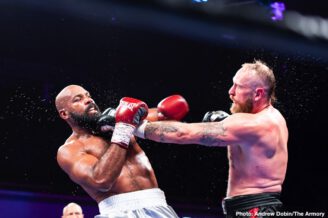 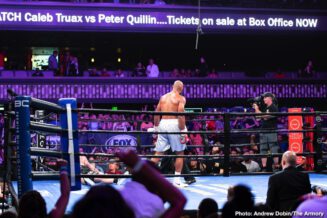 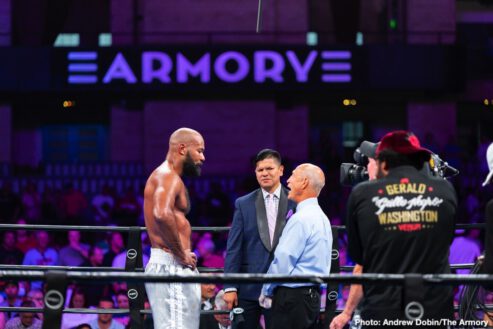 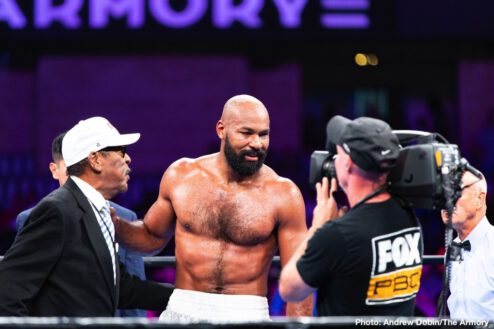