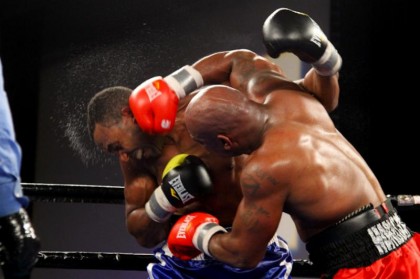 Photo: Larry Levanti/Main Events – Heavyweight Amir Mansour, 20-0, 15 KOs, floored Kelvin Price, 14-2, 6 KOs, in rounds five and seven en route to a sixth round TKO victory in the main event at Resorts International Hotel Casino. The fight was televised on Fight Night by NBC Sports Network, and was Mansour’s national TV debut. Mansour, Wilmington, DE, was the harder puncher and eventually wore down his six-foot, seven-inch opponent from Pensacola. “It came down to who wanted it more,” Mansour said after the fight. “And there is no one with more desire than me. He was tough and we both wanted the same thing, but I’m going to keep coming until I get him out of there. That’s what I did.”

After Mansour dropped Price in the seventh and battered him until the bell ended the round, referee Earl Brown stopped the fight before the next round began. The result was a TKO at 3:00 of round seven.

“I actually thought I might get the knockout,” Thompson said. “He was a lot tougher than I expected. He took a lot of huge body shots.”

Former two-time cruiserweight champion Steve “USS” Cunningham, Philadelphia, 26-6, 12 KOs, pounded out a workmanlike unanimous decision over Manuel Quezada, 29-8, 18 KOs, of Bakersfield, CA, in an 8-round heavyweight fight. Cunningham won every round on all three official 80-72 scorecards in the one-sided fight.

In a bruising punch out, heavyweight Darnell “Ding-A-Ling Man” Wilson, Miami, FL, scored a dramatic KO at 2:59 of the 6th and final round over previously undefeated David “Nino” Rodriguez of El Paso, TX. Rodriguez was leading on two of the three the official cards before Wilson cut him over the right eye and then landed a picture-perfect left hook just before the final bell. The punch sent Rodriguez crashing to the canvas, and referee Lindsey Page stopped the fight immediately. Rodriguez, 36-1, 34 KOs, was returning to the ring after a layoff of more than two years. Wilson, 25-17-3, 21 KOs, snapped a 5-bout losing streak with the KO.

In the opening bout of the evening, Vincent Floyd, Philadelphia, dropped Trent Laidler, Palm Beach, FL, in round one but had to settle for a 4-round split decision draw. Judge Debbie Barnes had Laidler the winner 40-35. George Hill scored the bout 38-37 for Floyd, and Joe Pasquale saw it even, 38-38. Both middleweights were making their professional debut.
Photo Credits to Larry Levanti/Main Events

In the scheduled 4-round walkout bout, Philadelphia heavyweight Aaron Leonard, 1-1-1, 1 KO, stopped Sicklerville, NJ’s Andrew Peurifoy, 0-1, at 1:50 of the first round.