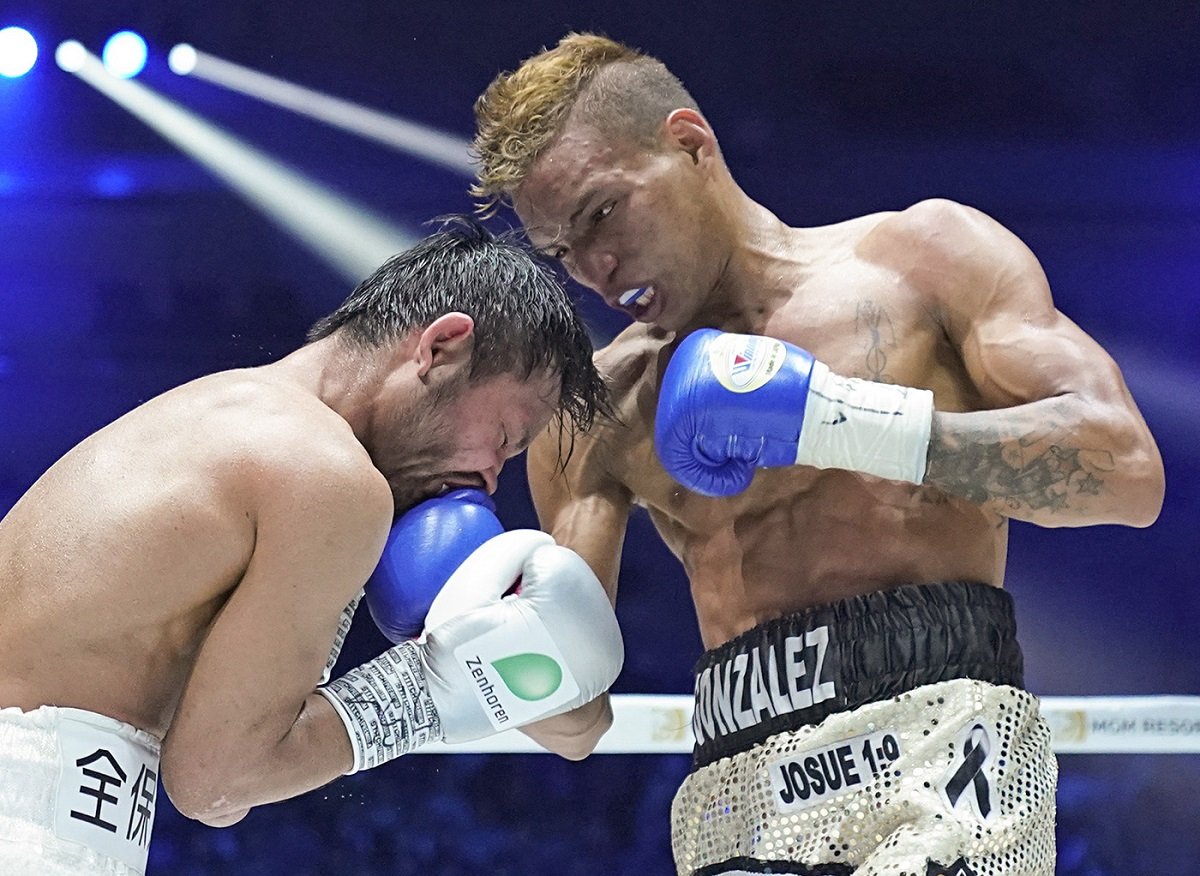 Cristofer Rosales (27-3, 18 KOs) used his size advantage to stop a depleted looking previously unbeaten Daiga (Higa (15-1, 15 KOs) by a 9th round stoppage on Sunday night to win the vacant WBC flyweight title at the Arena Yokohama, in Yokohama, Japan.

The fight was stopped by Higa’s corner in the 9th round after he had taken some left-right combinations from Rosales on the outside. Higa was backing up all night long from the shots from Rosales. Higa didn’t have the height or reach to deal with Rosales’ size. The Nicaraguan fighter was able to nail Higa with shots whenever the two were on the outside.

Higa didn’t look that hurt at the time of the stoppage. He was just getting hit a lot, and he was backing up. It’s perhaps a good thing though that Higa’s corner halted the fight, because he looked tired and his punches were having no effect on the bigger Rosales. Mostly though, Higa looked weak like he’d had gone through an ordeal just to try and make weight.

Higa, 22, los his WBC 112 lb. title when he came in two pounds over the limit at 114 lbs. at Saturday’s weigh-in. The WBC flyweight title was then stripped from the 5’3” Higa, but it was available for the 23-year-old Nicaraguan Rosales.

Rosales,5’6 ½”, used his three-inch height and six inch reach advantage to get the better of Higa from the outside. But even on the inside, Rosales was in command much of the time. Rosales looked a lot heavier than Higa, and the overall size advantage appeared to be too much for the Japanese fighter.

Even when the two were in close, Rosales was getting the better of the action with his high work rate. Higa landed a lot of shots, but the punched didn’t move the bigger Rosales. He took the shots easily and was constantly throwing back combinations. The work rate for Rosales is what won him the fight. He was the busier fighter of the two.

The win for Rosales was his fourth consecutive since losing to Andrew Selby by a one-sided 12 round unanimous decision last year in August. The 5’6” Selby didn’t have a huge height and reach advantage against Rosales that Higa had, and that was the difference. With his equal size, Selby was able to out-box Rosales for 12 rounds to win the decision. Higa didn’t have the height or reach to box Rosales. He was forced to slug with him, and he didn’t possess the work rate to get the better of Rosales.

Higa will need to rebuild now and perhaps go in another direction. If he’s unable to make the 112 lb. weight division comfortably, then he’ll need to move up to super flyweight and try to deal with the lions in that division like Srisaket Sor Rungvisai, Juan Francisco Estrada, Khalid Yafai, Jerwin Ancajas and Donnie Nietes. Higa is better off staying at flyweight if he can still make weight.