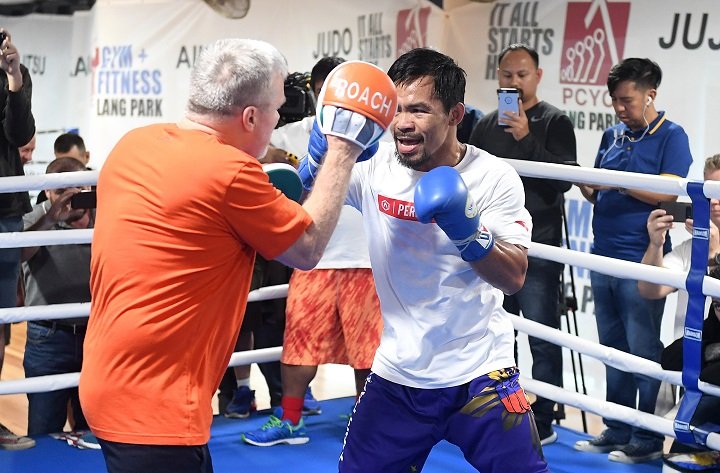 Former eight division world champion Manny Pacquiao says he still hasn’t made an official decision yet whether he’ll use Freddie Roach as his trainer for his title challenge against WBA World welterweight champion Lucas Matthysse on July 14 in their fight in Kuala Lumpur, Malaysia. Pacquiao (59-7-2, 38 KOs) says he’ll make his decision this week whether to use Roach, who has trained him for the last 17 years since 2001.

The reason why the boxing public assumed that Roach was out as his trainer was due to a press release being sent out naming Pacquiao’s trainer team, which includes Buboy Fernandez, but it didn’t list Roach as one of the training staff. Further, Roach said that he hadn’t been contacted by Pacquiao, and he felt that was kind of strange because he expected that if he going to stop using him as a trainer, he would have at least phoned him and informed him personally.

Here’s the statement by Pacquiao on his social media about Roach:

“Contrary to statements which I personally did not make that are circulating in the media, I have not made my final decision whol will be my head trainer for my July 14 fight with Matthysse. My adviser Mike Koncz has been in contact with Freddie’s people to keep them informed. I will make a final decision within the week. When that decision is made, Freddie will be the first one to be informed and then I will advise the media. #Pacquiao-Matthysse.”

It remains to be seen how Roach will react to the way Pacquiao has left him hanging like this. If Pacquiao decides that he wants to keep Roach, it might make the trainer feel uncomfortable now.
This still looks bad the way that Pacquiao is making this a public thing. It would have been better if Pacquiao had simply kept quiet until he decided whether to continue to use Roach or not.

Once he made the decision, he should then contact Roach to let him now. But with the way Pacquiao had let the boxing public know that he’s still thinking it over, it puts Roach in a position where he doesn’t look so great. After all the time that Roach has worked with Pacquiao, it seems off putting for him to be dealt with like this. It should be a matter between the two of them and not talked about.

Pacquiao could have a lot of problems with Matthysse (39-4, 36 KOs), who is younger than him by four years, and a lot bigger puncher. If Matthysse connects with one of his big power shots, he could knock Pacquiao out. Pacquiao hasn’t fought in a year since his loss to Jeff Horn in July 2017, and he did not look good in that fight. Being out of the ring for the last 12 months probably hasn’t made Pacquiao a better fighter, and if he’s not going to be trained by Roach, you have to give him even less of a chance of beating Matthysse.