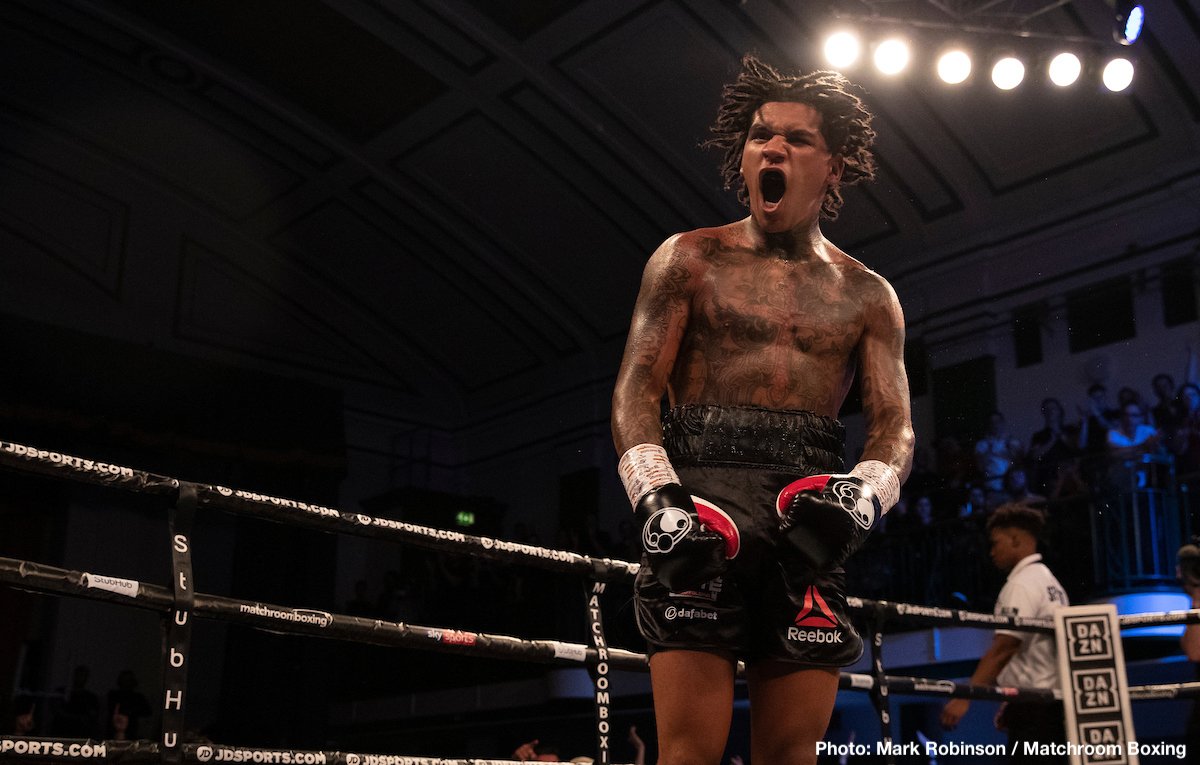 Conor Benn survived a scary first round to destroy Juss Koivula with a brutal second-round finish and successfully defend his WBA Continental Welterweight crown. In his first ever headline fight, the 22-year-old Ilford star saw his legs buckled on more than one occasion in the opening session, but he showed his fighting genes in the second, crashing home vicious hooks, dropping his Finnish foe twice before the referee waved off the fight.

Speaking after the fight Benn said: “He tried to bully me and treat me like a young boy but I was not having any of it. I wanted to let him know I am Conor Benn.

I think I did box and then I applied my aggression. Two or three fights ago I might not have done that. I am not the fighter I was then I first started.

“I was not hurt at all, nothing he did even woke me up.”

Ted Cheeseman had to settle for a frustrating draw in what was the maiden defence of his British Super-Welterweight title against Kieron Conway. The Bermondsey warrior fell short when moving up to challenge for Sergio Garcia’s European title in February, and seemed to have done just enough to successfully defend his Lonsdale belt on his ring return, but scores of 116-113 (Conway) 115-114 (Cheeseman) and 114-114 saw him draw for the first time in the pro ranks. After the fight, promoter Eddie Hearn confirmed that ‘The Big Cheese’ will likely defend his belt against Preston’s Scott Fitzgerald next.

Craig Richards set-up a shot for the British Light-Heavyweight crown with a hard-fought win over South London rival Andre Sterling. The pair had traded verbal blows in the heated build-up to their York Hall grudge match, but it was ‘Spider’ who settled their feud, dropping his man in the sixth before taking a unanimous verdict of 117-111, 116-111 and 115-112.

Exciting Ohio Super-Featherweight talent Otha Jones III wowed York Hall on his UK debut with a blistering first round stoppage win over Mottram’s Michael Horabin to move to 2-0. The USA national team star came out firing and dropped Horabin to the canvas twice before the referee saved him from further punishment.

Shannon Courtenay made it three wins from three with an impressive stoppage of Valerija Sepetovska. Following two points victories at the Copper Box Arena and The O2, the Watford prospect displayed her power from the opening bell, dropping her Latvian opponent in the first before a big second-round finish.

Charles ‘Boom Boom’ Frankham made light work of Latvia’s Ilgvars Krauklis in his second outing as a professional. The highly decorated amateur star from Crowthorne stopped in opponent in the opening round of his first ever outing at York Hall.

Duane Sinclair suffered a first career defeat at the hands of tricky Westbury man Anthony Fox. The South Londoner, recently signed by Heavyweight contender Dillian Whyte, had hoped to extend his unbeaten run to 11 fights but Fox had other ideas, outpointing Sinclair 79-73.

Watford’s Reece Bellotti returned to winning ways in the evening’s first contest to progress to 14-2, 12 KOs. Coming off a loss to British Featherweight Champion Ryan Walsh, Bellotti landed a brutal body shot with the left in the sixth round that dropped Josue Bendana to the canvas.