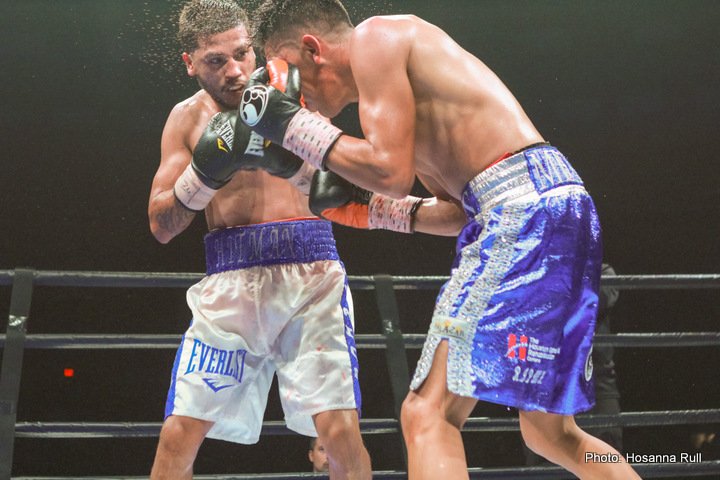 In a battle of exciting featherweight brawlers, Chris Avalos (27-5, 20 KOs) was awarded a TKO victory after the doctor ruled that Miguel Flores (21-2, 9 KOs) could no longer continue due to a cut sustained during their featherweight matchup that headlined Premier Boxing Champions TOE-TO-TOE TUESDAYS on FS1 and BOXEO DE CAMPEONES on FOX Deportes Tuesday night from Rapides Parish Coliseum in Alexandria, Louisiana.

The action packed showdown came to an end after the fifth-round when the doctor deemed that the cut over Flores’ left eye was too serious for him to continue the fight. Because referee Bruce McDaniel ruled that the cut was caused by a punch, and not a head butt, Avalos was given the stoppage victory.

“I’m disappointed by what happened,” said Flores. “We were winning the fight. Everybody saw what happened. We saw the referee say it was an accidental head butt, but this kind of stuff happens in boxing. They took it away from me.”

“I didn’t get the victory the way I wanted, but I got the win,” said Avalos. “It was a good back and forth action fight. We both had moments where we went after each other and the other guy always came right back.”

The cut in question occurred in round four, from what appeared to be a grazing of heads on the inside, but was contested by Avalos.

“We caught a little bit of a head butt, but I don’t remember any cuts coming from it,” said Avalos. “I didn’t see any blood from the head butt. I saw blood after I threw a right hand.”

Flores was ahead 48-46 on all three scorecards at the time of the stoppage, and had put Avalos on the canvas with a good combination and follow-up flurry in the third round. The fight had been highlighted by consistent powerful exchanges on the inside before coming to an unsatisfactory finish after the fifth round.

“The cut was bothering me and I couldn’t really see out of that eye,” said Flores. “It was just a matter of time until I got the knockout though. I was breaking him down. I’ll learn from it and get better. I definitely want an immediate rematch next.”

“I was proud of what I was able to do and I thought it was a really good fight,” said Avalos. “He’s a good fighter and I’d definitely give him a rematch.”

Elbiali came out aggressive from the start, looking to land big power shots with both hands while Brooker quickly sought to establish his movement and consistently tied up Elbiali when the action moved to the inside.

Both men received a warning from referee Bruce McDaniel midway through the first round for hits to the back of the head and it was later on in the round when the referee deducted a point from Brooker after another illegal shot.

Elbiali began the second round continuing his aggressive style and stalked Brooker until he could unload power shots in the corner. After landing several big shots that began to slow Brooker, Elbiali rained down multiple overhand rights that left Brooker hunched over before a final left hook put him on the canvas. The referee jumped in and called a halt to the bout 1:48 into the round.

“I had a decent performance tonight, I was definitely a little sloppy but I’ll have to look at the tape,” said Elbiali. “I still have a lot to learn and plenty of improvements to make. At the end of the day, I got the knockout that I was looking for.”