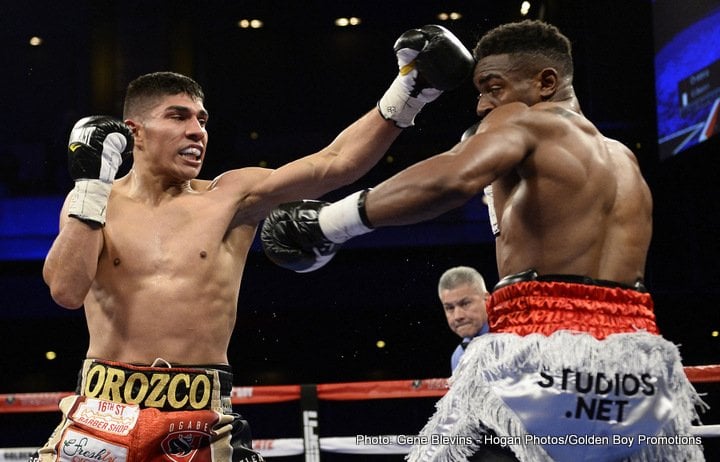 Antonio “Relentless” Orozco (26-0, 17 KOs) wasn’t up to any tricks this April Fool’s Day as he proudly pronounced his return to the ring with a dominating knockout over KeAndre “The Truth” Gibson (16-1-1, 7 KOs) in the fourth round of the main event live from The Cosmopolitan of Las Vegas and televised on ESPN Deportes and ESPN2. Both fighters entered the ring undefeated, yet it was Orozco who walked away as the new WBC USNBC Super Lightweight Champion.

“From start to finish, I stuck to the fundamentals in this fight,” said Orozco. “I’m very happy to have won this fight, and now it’s time to go home to my family.”

“I tried to outbox him,” said Gibson. “Unfortunately, I got caught. It happens.”

In one of the most entertaining fights of the night, San Diego, CA’s Mercito “No Mercy” Gesta (30-1-2, 16 KOs) and Gilberto “Flaco” Gonzalez (27-4, 22 KOs) of Mexico City went to war in a barn burner co-main event. With non-stop action, Gonzalez used his impressive reach to knock Gesta down in the third round. However, for every hit taken, Gesta lived up to his nickname and showed ‘No Mercy’ bouncing back and putting his opponent up against the ropes in no time. Ultimately, the judges scored the fight with 99-91, 98-92, 96-93 all in favor of a unanimous decision for Mercito Gesta.

“I listened to my corner in the fight, and never let my opponent get too close,” said Gesta. “I’m happy with the outcome, and I plan to lie low after this.”

Participating in the swing bout televised on ESPN, the pride of Palmdale, CA Cesar Diaz (5-0, 4 KOs) went the distance for the first time in his career against seasoned fight veteran Felipe “Panterita” Rivas (17-19-4, 11 KOs) of Nogales, Mexico. At the end of the fight, the judges announced their scores of 60-54 awarding the unanimous decision victory to Cesar Diaz.

“I think this was a good fight,” said Diaz. “I knew going in he was an experienced fighter, so it was good for me to learn from this and know how to improve for next time.”

Part of the livestream, Glendora, CA’s Joet Gonzalez (16-0, 8 KOs) stayed undefeated with a fifth round stoppage over Derrick Murrary (13-2-1, 5 KOs) of St. Louis in their featherweight event. In the first rounds, both fighters were testing one another exchanging a series of hits and blows. Gonzalez gained steam in the fourth round and began putting and stifling Murray with his signature power punches, which continued into the fifth round when it ended.

“Going in, I wanted to be smart and cut him off,” said Gonzalez. “Overall, this was a great fight, and I’m happy to have another victory.”

Fighting in the opening bout of the evening, Emilio “The Kid” Sanchez (15-0, 10 KOs) of Pacoima, CA proved himself to be an expert counterpuncher in this featherweight fight against Ciudad Juarez, Mexico’s Jose “Flash” Bustos (11-8-3, 7 KOs). For every punch thrown, Sanchez would follow it up with a smoldering hook to Busto’s body. As the rounds weathered on between the fighters, it was Sanchez who defeated Bustos by way of technical knockout at the :51 mark in the eighth round.

“My plan going in to the fight was to be smart and not get hit,” said Sanchez. “I didn’t plan on knocking him out in the last round, the knockout came on its own, and I’m happy with the outcome.”