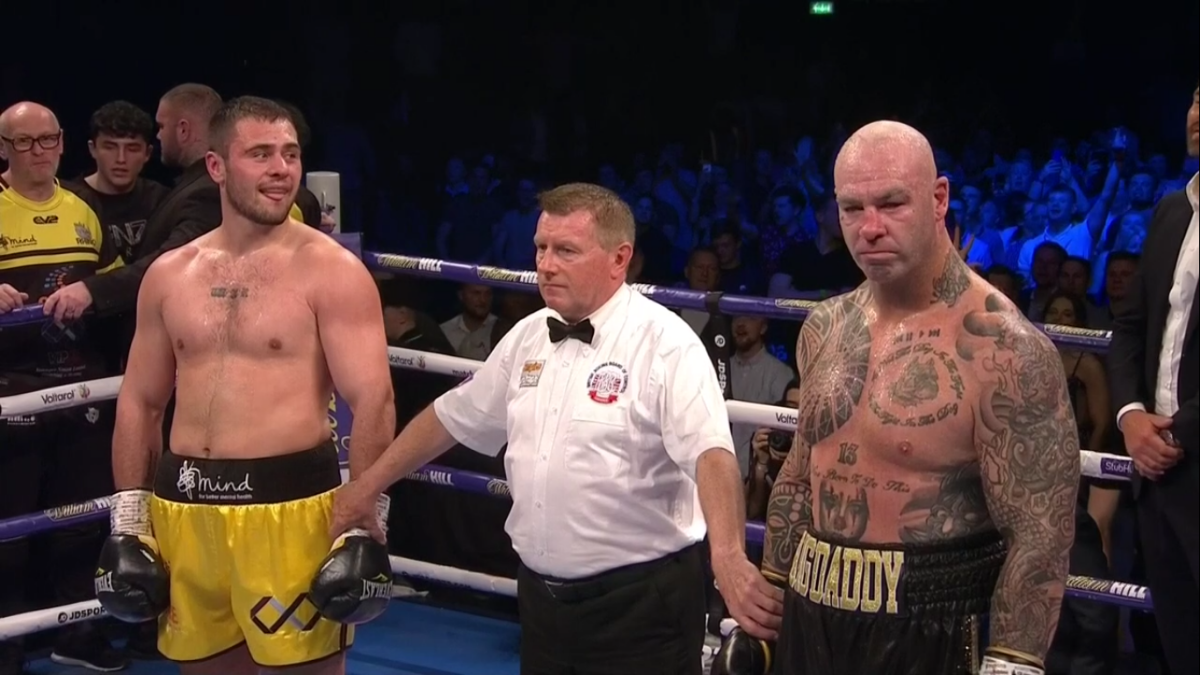 Heavyweight Dave Allen (17-4-2, 14 KOs) sent former WBA World heavyweight champion Lucas ‘Big Daddy’ Browne (28-2, 24 KOs) down to his second career defeat in stopping him in round three with a beautiful left-hand body shot on Saturday night on DAZN at the O2 Arena in London, England.

Browne threw a lazy right hand that Allen ducked, and came back with a left hook to his midsection. The caused the 40-year-old Brown to wince in pain, and collapse on the canvas. Browne wasn’t get back to his feet, and the fight was stopped by referee Marcus McDonnell at 0:59 of round three.

Going into the heavyweight contest, the boxing public expected it to be a huge slugfest. There wasn’t a lot of great action in the fight. Browne was doing a lot of jabbing, and looking slow from the outset. One could sense that Browne was going to have problems later on in the contest, because he lacked the hand speed to deliver his power shots without getting countered on the way in, and when pulling back. That’s what eventually led to Browne getting stopped in the third round with a body shot from the 27-year-old Allen. Browne tried to throw a slow right hand, and he left himself open. Browne didn’t possess the hand speed for him to be able to land fast shots.

Former heavyweight world title challenger Dereck Chisora (30-9, 21 KOs) won an easy 10 round unanimous decision over Senad Gashi 17-3, 17 KOs). Gashi never made an attempt to win the fight. His main focus it appeared was for him to survive long enough to see the final bell, and he accomplished that goal. For a co-feature, this was a horrible fight to watch. Chisora was too slow on his feet, and lacked the hand speed to connect even when Gashi was right in front of him. Chisora looked as slow as Lucas “Big Daddy” Brown did in the main event.

The judges scored the fight 100-90, 100-91, 99-91. Boxing 247 had Chisora winning 10 rounds to 0. Gashi was missing in action tonight. It’ll be interesting to see if Matchroom Boxing promoter Eddie Hearn continues to use Gashi in the future for his heavyweights. He might want to save his fans the displeasure of seeing him again.

Chisora, 35, could face either former WBO heavyweight champion Joseph Parker or Dave Allen next. If Chisora has a choice, he’ll likely opt to fight Parker, as he’s a proven professional fighter, and only recently lost his World Boxing Organization heavyweight title to Anthony Joshua. Chisora would be in a no-win position if he faces the inexperienced Allen.

Kelly showboated the entire fight, battling with his hands by his sides, throwing sustained combinations, and nice spot shots. Kelly’s decision to fight with his hands by his sides often led to him getting hit with hard punches from Runowski. Kelly never made adjustments by protecting his head. He fought with his hands down the entire fight, and wasn’t overly impressive. Kelly is going to need to change the way he fights if he wants to go anywhere in the welterweight division. He’s not another Roy Jones Jr. in terms of hand speed, reflexes and talent. Kelly looks robotic, flawed, and a knockout waiting to happen. It’s hard to see Kelly making it beyond the contender stage of his career if he doesn’t make drastic changes in his fighting style. All the bad habits Kelly has learned since turning pro need to be junked entirely. He needs to start over.