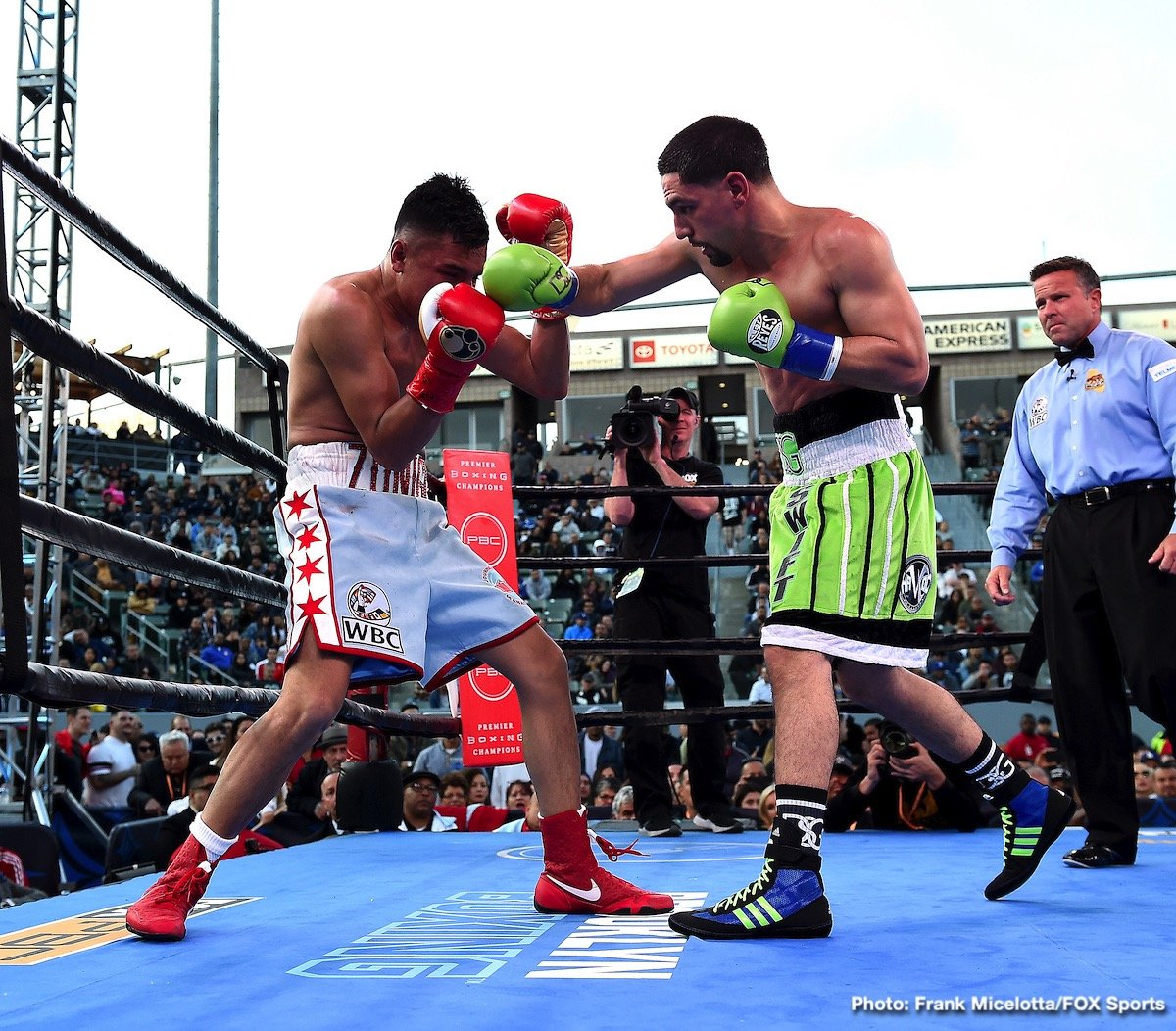 In a spectacular performance former two division belt holder Danny Garcia (35-2, 21 KOs) bludgeoned the game but limited Adrian Granados (20-7-2, 14 KOs) in scoring a seventh round TKO victory on Saturday night in a fight that was shown on PBC on Fox at the Dignity Health Sports Park in Carson, California.

The fight was stopped with Granados still on his feet in the seventh round by referee Thomas Taylor. Granados’ nose was busted up, and he was taking too much punishment by the harder hitting 31-year-old Garcia. The referee decided to pull the plug in the fight, which was the wise thing to do. Granados had no chance whatsoever in winning the fight, and it would have ended badly for him if the referee had let the contest go much longer. The time of the stoppage was at 1:33 of the seventh round.

“Swift” Garcia knocked “El Tigre” Granados down 2 times in round two, and once in the fifth round with powerful shots. Granados normally has great punch resistance, but not tonight. Garcia looked like a junior middleweight when he stepped foot inside the ring. It’s no wonder that Garcia has been talking so much about wanting to move up to the 154 lb division soon. The guy has gotten bigger with age.

Initially, Granados didn’t look all that bad in the first round. He was connecting with some nice shots to the head of Garcia, and looking like he was going to make it competitive tonight. Garcia isn’t hard to hit, so it’s not a surprise that Granados was having some success early. Even Brandon Rios was hitting Garcia at will in their fight a year ago. Hitting Garcia isn’t the problem. It’s taking the shots that he throws back. That’s the problem, and Granados started falling apart beginning in the second. Garcia knocked Granado down twice in the round with big shots. In the first of two knockdowns in the round, Garcia landed a left hook that dropped Granados like a sack of potatoes. To his credit, Granados got back to his feet and continued fighting. Moments later, Garcia knocked Granados down for a second time in the round with a hard right hand to the head.

Things didn’t get better for Granados in rounds three and four, as he continued to get pummeled by heavy shots from Garcia. Granados suffered a nose injury in the third, and that seemed effect his breathing. It didn’t matter. He wasn’t going to last long anyway because he was nailed flush with Garcia’s best left hook power shots.

Garcia knocked Granados down in the fifth round with a big shot. By this time in the fight, things were looking bleak for Granados. His trainer was looking at him closely, and it appeared that he wanted to stop it. In hindsight, he probably should have, because Granados had no chance of winning and was getting the living daylights beaten out of him by Garcia.

In the seventh round, the referee stopped the fight due to Garcia hitting Granados with too many heavy shots.

It was a good showcase fight for Garcia, but it really tell us anything. Garcia is still not considered an elite level guy at 147. If this had been Errol Spence, Shawn Porter, Keith Thurman or Terence Crawford, he probably would have lost to all of them. Garcia isn’t even mentioning Spence’s name, so it seems like he doesn’t want any of that work. Garcia is targeting Thurman and Porter to try and avenge his losses to them before he moves up to 154. If Garcia does move up to junior middleweight, it’s likely that he’ll come back down to 147 once he discovers he’s too small for the division in terms of height, reach and frame. Garcia is a junior middleweight in terms of weight, but not his frame. He doesn’t have a huge frame to be fighting guys like Jermell Charlo or Jarrett Hurd. Those guys would likely crush Garcia and send him packing back down to the 147 lb division.