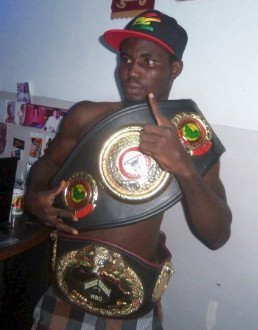 Unbeaten Ghanaian Lightweight, Rafael Mensah remains resolute in the pledge to follow in the footsteps of childhood hero, Ike Bazooka Quartey and bring Ghana another WBA world title.
One of the best kept secrets in Ghanaian boxing circles, Mensah, 21-0, 16 KOs has steadily found his way into the WBA rankings and is currently number 8 in the world.

He’s coming off a successful defence of the WBA Pan Africa Lightweight belt courtesy a round 4 TKO Mouibi Serouna of Togo and will be in action again on May 3 against former African champion, Abdul Malik Jabir.

When Eastsideboxing.com caught with Rafael Mensah in Accra, the boxer affirmed his readiness to challenge the elite Lightweights in world boxing but until he gets a shot he will be defending his African version of the WBA Lightweight belt.

Asked what fight he will fancy most, Mensah responded that he had penciled down Ricky Burns who beat 3 Ghanaian boxers (Yakubu Amidu, Joseph ‘Mandigo’ Laryea and Ben Odamttey) and he wanted to stop the trend.

“Now that Ricky Burns has lost his WBO Lightweight title, I’d have to look at other Lightweights who are world champions. With time and patience, I’m praying WBO regional chairman Stanley Christodoulou will hear of my exploits in Africa and give me the opportunity to fight for the world title,” Mensah said.

He continued: “I am well aware that where I am in my career, I can wake up tomorrow and be told to fight for the world title so I’m not taking training lightly.
“I thank my manager, Anthony Kermah, CEO of Landmark Promotions for where he has put me at the moment.”

“My trainer Ofori Asare and my sparring mate, Patrick Allotey are in Zambia battling for the WBC International Welterweight title on 15th March and I wish him all the best that he brings the title to Ghana,” Rafael Mensah added.