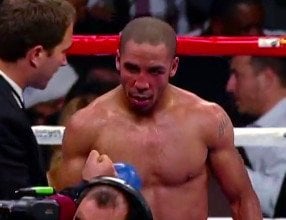 With under a month remaining until his highly anticipated return, WBA and Ring Magazine Super Middleweight World Champion Andre “S.O.G.” Ward went back to his roots at King’s Gym in Oakland, Calif., to discuss his upcoming battle with Edwin “La Bomba” Rodriguez. After a 14-month layoff due to a shoulder injury, Ward will step back in to the ring on November 16 at Citizen’s Bank Arena in Ontario, Calif., on HBO World Championship Boxing. He shared his thoughts about the importance of staying in shape throughout the year, the impact of the layoff and his young, hungry opponent with the Bay Area media assembled at his childhood gym.

“The first thing people said when they saw me at the press conference was how lean I looked. I think that’s how a fighter is supposed to look. When I used to run in to the great Bernard Hopkins, the first thing I always noticed was how lean he looked. He looks like he is living like a fighter.”

“I have had a year of setbacks, a year of a mountain that I had to climb to get to this point, and that made me hungry. I thought I was hungry before the injury but I’m famished right now. I’m ready to get at it.”

“Being off with this injury and not being in the game, it just did something to me. I didn’t have a crowd. I didn’t have TV cameras. I didn’t have people cheering me on. I had supporters but I had to find something deep within myself to say, I need to stay ready. Negotiations were long and grueling, but when I got the call that the fight was official, physically I was ready. I had been working. I wasn’t just sitting on the couch, taking vacations. I had been working for a year and I think everyone’s going to see that November 16.”

“They are going to be in for a rude awakening come November 16. Don’t get me wrong, he’s tough, he’s young. I was in his position in 2009 when I fought Kessler, I fought a seasoned veteran but the difference between Kessler and me is that Kessler took me lightly. He felt like oh this young guy, he’s talented but…I’m looking at Edwin likes he’s my toughest challenger up to this point. I know a lot of guys say that but I really am.”

“You’re only as good as your last performance so I can’t rest on my laurels and go in to this fight with a big head because that’s when guys who shouldn’t get knocked off, get beat and there’s an upset and that’s not going to be the case on November 16.”

2004 U.S. Olympic gold medalist and WBA and RIng Magazine World Super Middleweight Champion Andre “S.O.G.” Ward makes his highly anticipated return to the ring defending his title against Edwin Rodriguez on Saturday, November 16 at the Citizens Business Bank Arena in Ontario, Calif. Following slightly more than a year’s absence from the ring due to injury, Bay Area hero, Ward (26-0, 13 KOs) will put his world titles on the line against the undefeated Rodriguez (24-0, 16 KOs) in a scheduled 12-round World Championship main event, which will be televised live on HBO World Championship Boxing® beginning at 9:30 p.m. ET/PT.