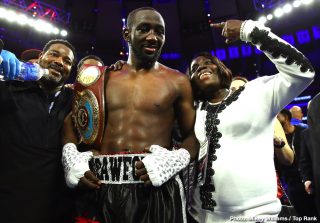 The dynamic coaching trio of Brian “Bo Mac” McIntyre, Esau Dieguez and Red Spikes was already known across the boxing world for their success with three-division World Champion Terence “Bud” Crawford, but 2019 has been a breakout year for the team.… read full article “Brian “Bo Mac” McIntyre and coaching staff dominate in 2019”

From 2013 through 2015, 2016 Olympic silver medalist and featherweight prospect Shakur Stevenson (Newark, N.J.) (4-0, 2 KOs) opened his competitive year in Reno, Nev. He will return to that tradition in 2018, kicking off the year in an eight-round featherweight contest versus Juan Tapia (Brownsville, Texas) (8-1, 3 KOs) on Friday, February 16 at the Grand Sierra Resort and Casino’s Grand Theater.

It’s official. The brightest young star in boxing is turning pro, under the guidance of the managerial team of J. Prince, Andre Ward and Josh Dubin.

“It is an honor and a privilege to represent this young man. Andre, Josh and I know we have the next superstar in the sport,” said Prince. “Shakur is not only a gifted fighter, but someone that has the ability to be an icon. Our first goal is to sign him with the right promoter. Then, we will be with him every step of the journey toward greatness.”

Stevenson won a silver medal in the bantamweight division at the 2016 Olympic Games in Rio de Janeiro, Brazil. He entered the Olympics with a perfect 23-0 international record and is the first American male to win junior and youth world titles, as well as a Youth Olympic Games gold medal.

For the second straight year, hometown champion Andre Berto (Winter Haven, Fla.) is returning to central Florida to celebrate the Thanksgiving holiday with his family and assist the community that helped build him in to a two-time World Champion.

Berto will host a turkey giveaway at 10 a.m. tomorrow at the Northeast Rec and Cultural Center in Winter Haven. A ticket will be required to participate and tickets will be given away starting at 9:30 a.m. on Wednesday at the rec center.

Kovalev-Ward “Pound For Pound” has been hailed by pundits as the fight of the year. The championship event, a 12-round mega-fight for the WBO/IBF/WBA light heavyweight title at T-Mobile Arena in Las Vegas, is presented by Main Events, Roc Nation Sports, Krusher Promotions and Andre Ward Promotions. The mega-fight will be produced and distributed live by HBO Pay-Per-View® beginning at 9:00 p.m. ET/6:00 p.m. PT.

Former two-time World Champion Andre Berto (Winter Haven, Fla.) traveled to his family’s native Haiti this morning to assist with the urgent relief work taking place in the island nation. Berto has joined forces with The Jack Brewer Foundation (JBF Worldwide) and its Global Ambassadors delegation to provide critically needed emergency relief efforts to the thousands of Haitians displaced by Hurricane Matthew, the catastrophic Category 4 storm that left Haiti in another state of massive devastation on Tuesday, October 4.

The last American man to win an Olympic gold medal in boxing and the 2014 Fighter of the Year will both be ringside for the 2016 Olympic Trials for Men’s Boxing next week in Reno. 2004 Olympic gold medalist and super middleweight world champion Andre Ward (Oakland, Calif.) and two-time world champion Terence Crawford (Omaha, Neb.) will each travel to northern Nevada for a trip down memory lane. Ward and Crawford competed in the 2004 and 2008 Olympic Trials respectively before reaching entering the professional ranks.

COLORADO SPRINGS, COLO. (November 9, 2015) – American lightweight Carlos Balderas (Santa Maria, Calif.) has dreamt of competing in the Olympic Games since he tied on his first pair of gloves at age seven. Next summer, he will fulfill that dream as the lightweight representative on the U.S. Olympic Boxing Team. Balderas is the first boxer to claim his spot on the 2016 squad, qualifying his berth through his finish in season six of the World Series of Boxing.