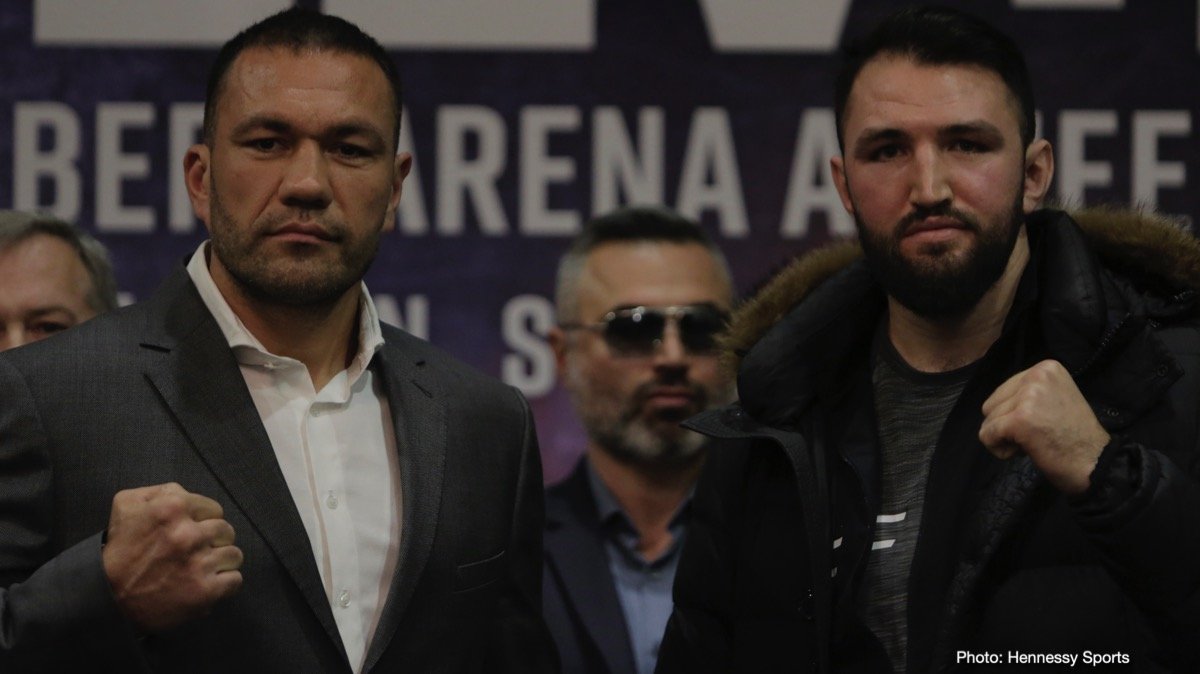 Fire & Fury” takes place this Saturday at the Arena Armeec in Sofia, Bulgaria. Ahead of the highly anticipated event, here is what Hughie Fury and Kubrat Pulev had to say:

“Thank you to the people of Bulgaria for welcoming me. I’ve had a great reception – it’s a pleasure to be here again. It’s a country that I’ve been coming to since I was a teenager and I hope to come again soon.

“I can’t wait for the fight on Saturday. Camp’s been tough but all the hard work’s done now, now’s the easy bit. – the fight. It’s not long now, it’s only three days away. I’ve come over here to win. I’m prepared for whatever he [Pulev] throws at me, and if I have to go the distance to do that so be it. Believe me when I say it’s going to be one hell of a fight.

“I watched him [Pulev] in action at yesterday’s open workout and I don’t see anything to be worried about. I’ve done my preparation and I’ve got Plans A through to Z ready for whatever he comes at me with.”

“This is the first time such a high profile fight has been held in Bulgaria. It’s never happened before. My opponent is very strong and It’s a very serious fight at world level.

“Camp has gone well and I’m well prepared. I’m in a concentrated place. I believe my years of experience has led me to this day where I have the maturity to manage fights to the end. I work very hard and this is what I’ve been doing the last three months with my coach and team. I have developed my strength this past year, not just physically but also mentally. I’m in the best shape I can.

“The arena will be full on Saturday night. I have to win to make the home ground proud. They are incredibly supportive of me.

”I watched the trailer video for this fight and saw Pulev as a young boy coming through the ranks and it’s the same story with our family. These men are warrior of this sport. I don’t like trash talking because I respect all fighters particularly ones at this level. These are fighting men and may the best man win.

“I want my son to face the best boxers. He’ll fight the best fighters anywhere on the planet because what I see today is plastic fighters in positions they shouldn’t be in because they don’t take proper challenges. My son will out it all on the line, believe me. He is a fighting man and has more heart than anyone.

“This is a great match up for me and for the travelling fans. Like me, she [Yanina] is my opponent is unbeaten so I’m excited to get out there, give it all I’ve got and get the win. I’m fighting for a belt so there’s a lot at stake.

“I’ve been in camp now for 14 weeks which has felt like a long time. But I’m looking forward to finally getting in the ring and showing what I’ve learnt in that time. All the training will be worth it.”

“I don’t know too much about Savannah but that doesn’t concern me. I’ve spent the time in the gym and I’m well prepared. On Saturday night you will see what I’m all about.”

“This is an incredible fight. I think this is a fight worthy of a genuine world heavyweight title. I’d like to congratulate both fighters for taking this fight. It’s a great fight for everyone, especially the fans. This is broadcasting to a terrestrial audience in the UK, live on Channel 5 at 9pm on Saturday. It’s going out to a huge audience. It’s the kind of show that makes stars.

“For Hughie to be operating at this level at 24-years-old is phenomenal. Believe he’s the future of the heavyweight division and we should enjoy his journey to becoming heavyweight champion.

“The reception Hughie’s had in Bulgaria has also been phenomenal. The locals have given this young fighter a warm reception. We really do appreciate the how he’s received here in Sofia, in Plovdiv. The Bulgarian fans have really thrown their support behind Hughie.”