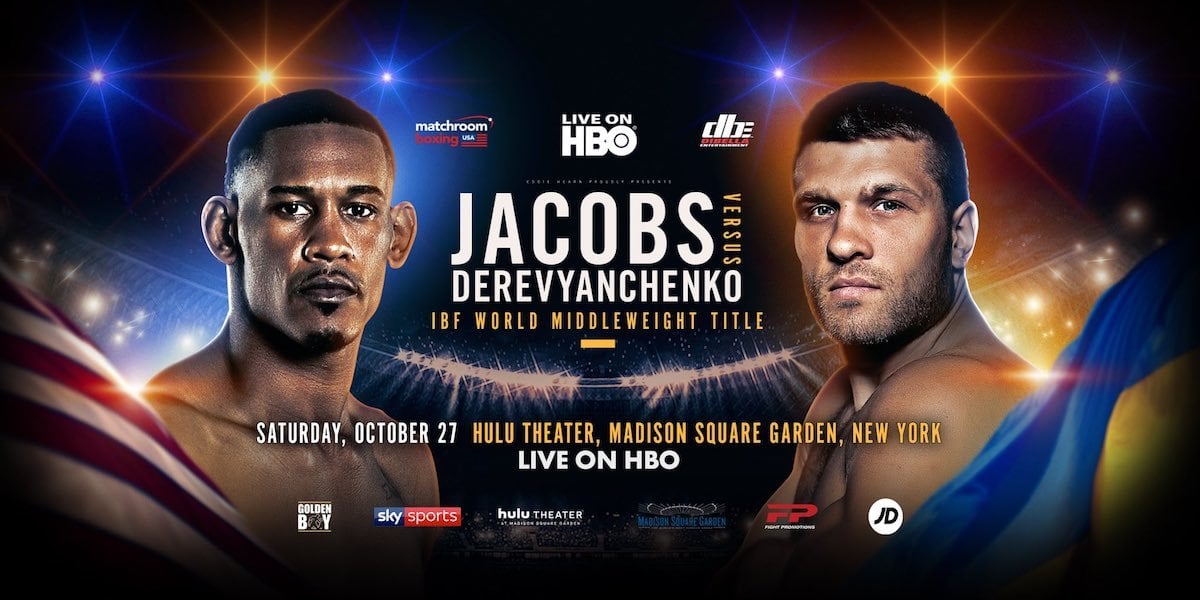 HBO Sports heads to the Hulu Theater at Madison Square Garden in New York City for the explosive tripleheader WORLD CHAMPIONSHIP BOXING: DANIEL JACOBS VS. SERGIY DEREVYANCHENKO, ALBERTO MACHADO VS. YUANDALE EVANS AND HEATHER HARDY VS. SHELLY VINCENT 2 presented SATURDAY, OCT. 27 at 10:00 p.m. (live ET/tape-delayed PT) on HBO. The HBO Sports team will call the action, which will be available in HDTV, closed-captioned for the hearing-impaired and presented in Spanish on HBO Latino.

In an intriguing middleweight showdown, Brooklyn-born headliner Daniel Jacobs (34-2, 29 KOs) takes on an opponent he knows well – Ukraine native Sergiy Derevyanchenko (12-0, 10 KOs), who now resides in Brooklyn – in a scheduled 12-round battle for a vacant title. Set to train in the Bay area, Jacobs, 31, is determined to regain a 160-pound title belt. Making his HBO debut, Derevyanchenko, 32, looks to keep his perfect record intact, showcase his considerable ring skills and pull off a stunner. In a red-hot division, this is one of the most anticipated bouts of the fall.

Both fighters have been trained by Andre Rozier. For the Oct. 27 showdown, Rozier will be in Jacobs’ corner, while Gary Stark Sr. mans the corner for Derevyanchenko.

The middle bout of the telecast bout is a scheduled 12-round super featherweight title bout between Alberto Machado (20-0, 16 KOs) of Puerto Rico and Cleveland’s Yuandale Evans (20-1, 14 KOs). Defending champ Machado, 28, is making his third HBO appearance. With back-to-back wins in 2017, the 29-year-old Evans seeks to take the title back to Ohio.

Leading off the tripleheader is a 10-round thrilling rematch of two fierce competitors: Heather Hardy of Brooklyn, NY (21-0, 4 KOs) and Shelly Vincent from Providence, RI (23-1, 1 KO). This battle renews their hot rivalry which resulted in the 2016 women’s fight of the year. The vacant world featherweight belt is on the line.