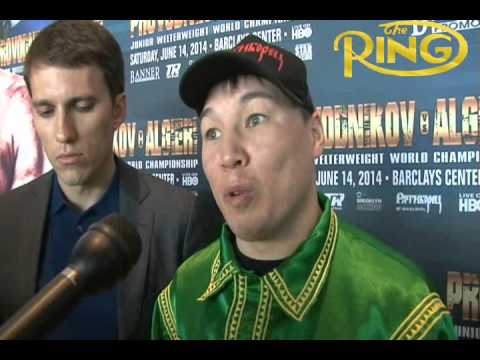 World Championship boxing returns to Barclays Center when the “The Siberian Rocky” RUSLAN PROVODNIKOV makes the first defense of his World Boxing Organization (WBO) junior welterweight title and his Brooklyn debut against undefeated world-rated contender and New York product CHRIS ALGIERI. Provodnikov vs. Algieri will take place Saturday, June 14 and will be televised live on HBO Boxing After Dark®, beginning at 10:00 p.m. ET/PT.

These four gladiators boast a combined record of 87-3-1 (44 KOs)– a 96 percent winning percentage, with more than half of their total victories coming by way of knockout.

Promoted by Banner Promotions and Top Rank®, in association with Joe DeGuardia’s Star Boxing, tickets to the Provodnikov-Algieri world champion event are $31, $56, $86, $106 and $206. Tickets will go on sale beginning Thursday, April 24 at 10:00 a.m. and can be purchased online via Ticketmaster by visiting www.barclayscenter.com or www.ticketmaster.com, or by calling 800-745-3000. Tickets are also available at the American Express Box Office at Barclays Center beginning Friday, April 25 at noon. Group tickets are also available by calling 855-GROUP-BK. For information on individual suites, please call 718-BK-SUITE.

“I am very excited to be fighting in Brooklyn at Barclays Center and look forward to this fight very much,” said Provodnikov. “I know a lot of my fans from Russia will be flying in to see this great event. I also hope that my fans from the United States, including the great Russian community in Brooklyn, will be there to support me.”

“I cannot wait for June 14,” said Algieri. “Ruslan is a great champion and a feared and avoided guy in the junior welterweight division, which is exactly why I am eager for the chance to fight him. I am ready.” 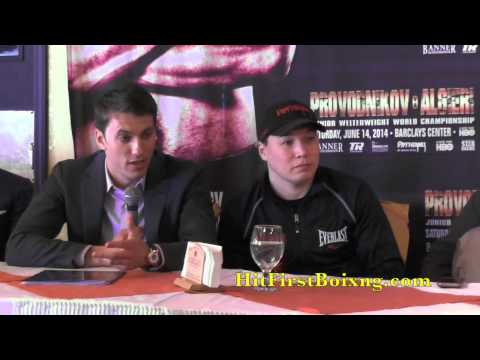 “This will be a great event,” said Arthur Pelullo, President of Banner Promotions. “Ruslan has proven in his last two bouts that he is one of the best fighters in the world and he knows that the biggest fights are ahead of him. Algieri is hungry and will be fighting close to home so we know this will be an outstanding fight with both men each bringing in a legion of fans to support them. We look forward to bringing this great event to Barclays Center in front of the great fans in Brooklyn.” 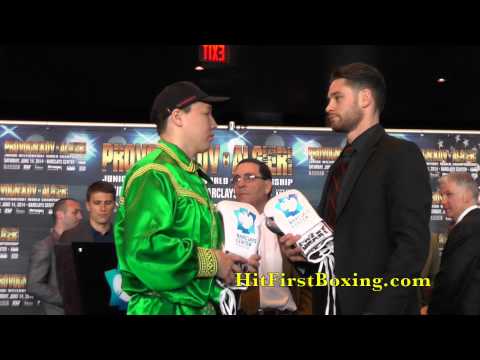 “We have been grooming Chris for this opportunity and I know he is ready,” said Joe DeGuardia of Star Boxing. “Chris is in top shape and thrilled to be fighting Ruslan, one of the toughest and most highly-regarded fighters in boxing. This show will be captivating and I am looking forward to watching it at one of the most premiere arenas in the world.”

“We are excited to continue hosting such great boxing events at Barclays Center,” said Barclays Center CEO Brett Yormark. “Between the large Russian community in Brooklyn coming out to support Ruslan, and the other local fighters on the card, we expect a great crowd and a lot of excitement in Brooklyn on June 14. I also want to thank our boxing partner Golden Boy Promotions for graciously enabling us to host this fight for the boxing fans of this borough.” 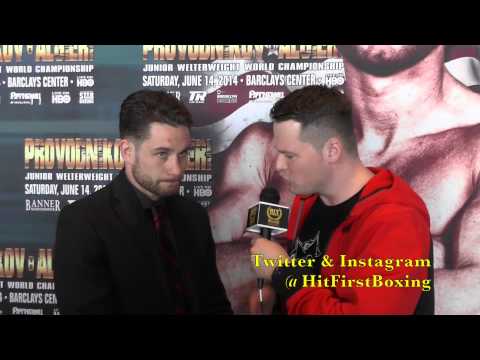 Provodnikov (23-2, 16 KOs), born and raised in Berezovo, Khanty-Mansi, Russia in Siberia, is trained by Hall of Famer Freddie Roach. He had an incredible year in 2013. On March 16, he was on the wrong end of a hotly-disputed unanimous decision loss to undefeated WBO welterweight champion Timothy Bradley, Jr. Provodnikov, who moved up in weight for his first title shot, hurt Bradley numerous times during their slugfest, nearly knocking out the defending champion in the first and second rounds and scoring a knockdown in the final round. Two of the three scorecards had Bradley winning by only one point. 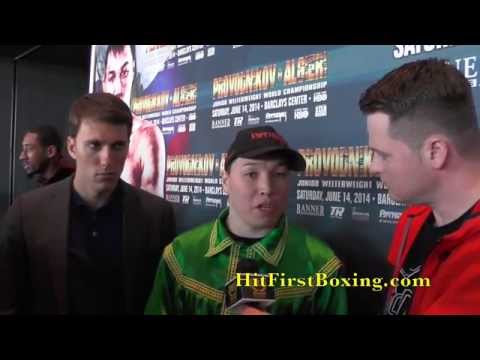 It was voted the Fight of the Year by the Boxing Writers Association of America. Provodnikov moved down to his natural weight in his next fight and challenged WBO junior welterweight champion Mike Alvarado, scoring a dramatic 10th round stoppage to claim his world title, last October 19. Five of Provodnikov’s last six victories have been by knockout. 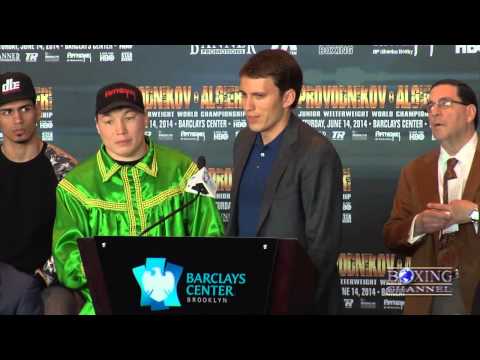 Algieri (19-0 8 KOs), hails from nearby Huntington, NY. Over the last 18 months Chris has elevated himself to a world-class contender after accumulating significant victories over top prospect Jose Alejo, former USBA champion Mike Arnaoutis, and most recently highly-rated contender Emmanuel Taylor in February. He’s as much a scholar as he is a brawler. He graduated from Stony Brook University with Honors in 2007 with a Bachelors of Science in Health Care Management and then went on to receive his Masters degree from the New York Institute of Technology. He aspires to attend Medical School.

“We are excited to have Demetrius make his first defense on this card,” said Pelullo, Andrade’s co-promoter. ” He is one of the future stars of boxing. To be at Barclays Center in Brooklyn is just fabulous”

“I am thrilled that Demetrius Andrade will be defending his WBO World Championship on this fantastic card,” added Andrade co-promoter DeGuardia. ” I’ve always felt Demetrius would rise to stardom and, on June 14, he will be able to do it in spectacular fashion at the beautiful Barclay Center in Brooklyn, NY.” 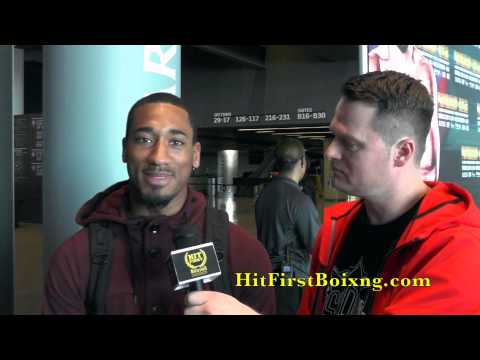 Andrade (20-0, 13 KO), of Providence, RI, has been a mainstay on television since making his professional debut following his stint on the 2008 U.S. Olympic team. Co-promoted by Banner Promotions and Star Boxing, Andrade’s aggressive style has attracted and created fans on both coasts of the U.S. He captured the vacant world title on November 9, defeating fellow U.S. Olympian Vanes Martirosyan in a battle of undefeated top-rated contenders. One doesn’t have to look any further than his recent record where Andrade has stopped five of his last eight opponents. Career highlights include victories over former world title challengers Freddy Hernandez and Angel Hernandez as well as former Contender champion Grady Brewer. 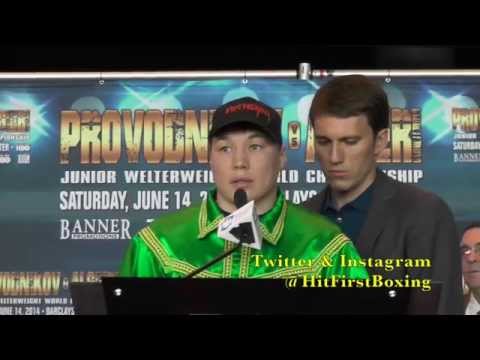 Rose (25-1-1, 7 KOs), from Blackpool, Lancashire, England, will be fighting outside the United Kingdom for the first time. He enters his first world title tilt riding a four-year, 11-bout winning streak, which has included BBBofC British, BBBoC English and WBO Inter-Continental junior middleweight title victories. In his last fight, on October 26, he won a split decision over Javier Maciel in a title elimination bout which made Rose the WBO’s mandatory junior middleweight challenger and No. 1 contender. Career highlights include knockout victories over former world champions Joachim Alcine and Vivian Harris.