Below are quotes from Lopez at the media workout.

“It feels great to be fighting on the Triller platform, something different with different musical artists. It’s going to be the greatest show this year and I’m excited to show everybody what I’m all about.”

“I don’t look at who I’m fighting, I heard the Selby fight was a close fight. However, Kambosos got the win, got the job done and became my mandatory.”

“One thing I’d like to clear up, the other guys in my division had four months to send me a contract and not one did. So, it all became George Kambosos at the end. I became world champion and undisputed and I want to let everyone know, I don’t duck or dodge anyone. With Kambosos, I’m not overlooking my competition but I’m looking straight through him.”

“I’ve been so focused on myself lately but as far as Josh Taylor or Jose Ramirez put them in front of me and I’ll beat them. Josh Taylor did what he to do, it was a great fight and a great event. The whole thing for me is making those types of fights happen. Sixteen fights in, I never said no to any fight. It’s up to these other guys to step up. They’re already talking about moving up to 147 and I can already sense the urgency in not wanting to fight me.”

“Triller is very driven and they really want to make their mark. We can talk about different things on the promotional side and they make it happen. With the boxing and the artists performing it’s a phenomenal collaboration. It’s great for the sport of boxing, it’s all entertainment at the end of the day. I’m not a fighter or a boxer, I’m an entertainer.”

“I just have to laugh at Lomachenko’s comments. It’s someone who never took a loss and especially the way I beat him. He’s in the past now. I took his heart, if we were to fight again I’d knock him out. My win over him elevated me to a whole other level.”

“It’s too late now for everyone, the amount of knowledge and ring IQ that I possess and have been working on, there’s no limit to me and I can’t wait to show that on June 19. It’s not about proving anybody wrong, it’s about proving me right.”

Among the others boxers at the media workout to greet Lopez were IBF Super Middleweight World Champion Caleb Plant and undefeated welterweight contender Conor Benn.

The four-hour show, which will kick off at 8:00 pm EDT with the live PPV main card starting at 9 pm EDT, will also feature a WBA World Title Heavyweight Eliminator bout between Michael Hunter (19-1-1, 13 KOs) and Mike Wilson (21-1, 10 KOs), as well as the WBC International Super Featherweight Silver Championship matchup between Andy Vences (23-2-1, 12 KOs) and Ireland’s Jono Carroll (19-2-1, 5 KOs). Additional fights will be announced in the coming weeks.

López, 23, (16-0, 12 KOs) is the current undisputed lightweight world champion, having held the IBF title since 2019 and the WBA, WBO, WBC, and Ring magazine titles since defeating Vasiliy Lomachenko in 2020. López is considered to be one of, if not the, best active boxers, pound for pound, by ESPN and Boxing Writers Association of America, and The Ring. He is also ranked as the world’s best active lightweight by BoxRec, ESPN, and the TBRB. The Australian Kambosos has held the IBF Pan Pacific lightweight title since 2017. Kambosos (19-0, 10 KOs) became the IBF mandatory challenger after defeating Lee Selby by split decision in October.

The co-main bout will feature a four-belt undisputed super middleweight championship between WBC/WBO titlist Franchon Crews-Dezurn and Elin Cederroos, who holds the WBA and IBF belts. The winner will become a true women’s undisputed champion in the sport. 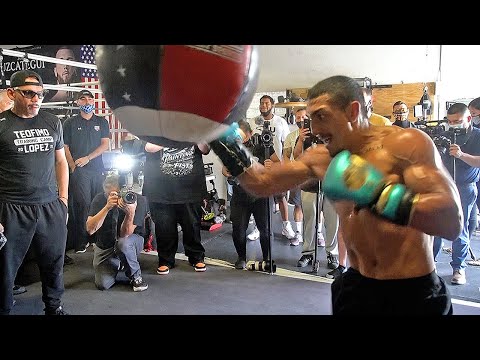 The PPV retail price for the event is $49.99 (U.S. & Canada) plus the processing fee. Fans outside North America can check the FITE link at https://www.fite.tv/watch/teofimo-lopez-vs-george-kambosos/2p97b/ for international pricing.