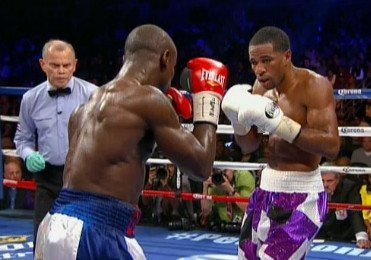 IBF light welterweight champion Lamont Peterson (32-2-1, 16 KO’s) put on a body punching clinic on Saturday night in giving Dierry Jean (25-1, 17 KO’s) a beating in winning a 12 round unanimous decision at the DC Armory, Washington, District of Columbia, USA. Jean proved to be a very poor fighter, and not nearly powerful or skilled enough to give Peterson any kind of fight.

Jean was taking vicious body shots the entire fight, and after the first few rounds, he wore down and was pretty much just a punching bag for Peterson to pound on for 12 rounds. Jean would land an occasional home run punch every now and then, but it was very rare for him to land anything. Jean mostly looked like a wild fighter with little skills or technique.

The judges scored it 115-113, 116-112, 118-110. Two of the judges were being very kind to Jean by giving him relatively close scores, because this fight wasn’t close at all. Jean was just there taking body punches and looking near helpless to do anything.

In the 6th round, Peterson cut Jean on the side of his right eye. It didn’t change anything in terms of the fight.

Jean was able to land some decent shots, but Peterson was hitting him far more frequently in every round of the fight. You can make an argument that Jean only deserved to win the 12th round, and the only reason for that is because Peterson stayed away from him the entire round.

Jean needs to go back to the drawing board and learn to fight a lot better before challenging for a title again. The IBF should make him fight someone like Lucias Matthysse the next time they install him as their number #1, because he was given the #1 spot without beating anyone good.

On the undercard, unbeaten Jermell Charlo (23-0, 11 KO’s) boxed his way to a 10 round unanimous decision over Gabriel Rosado (21-7 13 KO’s). Charlo did a good job of making Rosado miss with his shots. However, it wasn’t a very interesting fight because of Charlos boring fighting style. He’s 75% defense and only 25% offense, and he showed little power to speak of. He beat Rosado, but he wasn’t able to hurt him with anything.

It’s hard to say where Charlo can go in the 154 lb. division. He doesn’t have the power to beat the better fighters in the division, and he seems like a poorer version of Erislandy Lara. I think Charlo’s best bet is to go after Demetrius Andrade, the WBO 154 lb. champion. Charlo also might be able to beat IBF champion Carlos Molina. However, his fighting style is probably too negative for him to get fights against Canelo or Mayweather.