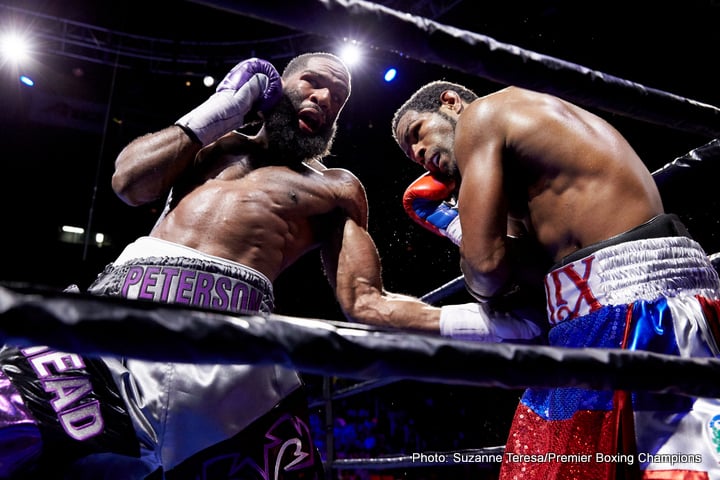 Peterson was visible worn as he kept trying to clinch Diaz throughout the eighth round while Diaz would follow the breaks by forcing Peterson to trade power shots. As the final seconds of the round came to a close, Peterson had to stop himself from earning a foul as he nearly hit Diaz in the back of the head as Diaz’s body slipped between the ropes.

Going into the championship rounds, the fight still seemed close with Peterson taking things early and Diaz dominating the middle rounds. However, it was at this time that things got their most entertaining. Diaz appeared to be gassing in round ten, allowing Peterson to come on strong. However, just as Peterson seemed to be taking over, Diaz popped Peterson with two overhand shots that stunned the former champ. In round eleven, more of the same give-and-take action occurred as Peterson and Diaz traded shots, culminating in a solid uppercut to the jaw from Peterson.

Walking into the final round, it was all-or-nothing for these fighters as they stepped to each other focused. However, again it seemed Diaz was getting the upper hand, blasting Peterson’s chin early. Diaz then leaned Peterson into the ropes to land another solid uppercut on that sent a spray of Peterson’s sweat through the air.

It appeared to many at ringside that Diaz had nicked the fight. However, the judges had other things in mind.
Although Judge Brian Costello called the fight a draw, Judges Dorothea Perry and Mike D’Attilio scored the fight clearly in Lemont Peterson’s favor. The response to the decision was mixed. Local fight fans cheered on the decision for local fighter Peterson, but boos also crept through the applause. This was mostly due to the most egregious of the scorecards, Perry’s 117-111 card favoring Peterson.

In the co-feature, it was a battle of undefeated fighters as Puerto Rico’s Prichard Colon (16-0, 13KOs) and LA-native Terrel “Tiger” Williams (14-0, 12KOs) squared off in what could only be called a very sloppy match. The fight was rough, as there was a lot of holding and punches that may or may not have been fouls to the back of Colon’s head early on. In round five, Colon committed a very clear low blow of his own, earning a two point deduction from the ref. Trainer Joe Goosen focused his man between rounds, only to watch Williams take another low blow from Colon before the end of the sixth. Sitting ringside, former lightweight champ Nate Campbell could be heard shouting ringside on how this fight was like the one he had with Edelmiro “The Tiger” Martinez eleven years earlier.

By round seven, the fight seemed clearly turned in Williams’s favor, only for it to be spoiled by an unintentional punch to the back of Colon’s head. Colon made everything of it, walking around with his glove on the back of his head while the crowd cheered Williams on. The ref took a point away from Williams for his troubles, and was given insult to injury when Colon put him in a headlock for the final ten seconds of the seventh. Williams continued to weather the storm though, clubbing Colon repeatedly to score a pair of knockdowns on Colon in round 9. There was a lot of confusion in Colon’s corner between rounds, with the trainer unlacing, and then relacing, Colon’s gloves while everyone walked around the ring thinking Colon had quit on his stool. Finally, referee Joe Cooper had seen enough and called the disqualification win for Williams.

In non-televised fights, Anthony Peterson (35-1, 23KOs) made short work of Mike Oliver (26-6-1, 8KOs), knocking him out almost immediately after the first round started. Peterson was understandably bothered as it appeared Oliver quit on his knees, but he was still pleased to come out and try to put on a show for the people in the stands.

“I’m a fight fan first,” Peterson said, shrugging his shoulders after the fight.
Alantez Fox got his own sloppy DQ win over faded gatekeeper Eric Mitchell 2:04 into the fifth round after Mitchell stumbled into Fox swinging away after being knocked down hard. Finally, Desmond Nicholson blasted Milton Nunez with repeated bombs to the head to force the referee to call a stop to the fight 2:25 in the opening round.

Lennox Allen (19-0-1) dominated Istvan Zeller (24-8) in a super middleweight four-rounder. It started tepidly for the first half of the round until Allen caught Zeller right on the nose, stunning him. From then on, Allen started unloading on him. Zeller could do little more than hold on as he was dropped twice in the first before Allen laid Zeller out 1:31 into the second.

With former lightweight champ Nate Campbell working his corner, super featherweight prospect Canton “Money Hungry” Miller (1-0) struggled to win a majority decision over Tommy Logan (3-1). It was started pretty even as they both traded heavy leather until Miller caught Logan with hook, dropping him late in the first round. Logan was still game though, as he kept coming forward dropping hard shots to Miller’s body. Logan kept it up, finally turning the tables with a barrage of hooks to the head that had Miller reeling about much of the third and fourth rounds. Still, it appeared the knockdown saved Miller as he walked away with his record intact.

And, in something for the locals, Fairfax native Jimmy Lange (38-6-2, 23KOs) got a late round stoppage over George Mason graduate “Money” Mike Sawyer (6-4, 4KOs) with a series of hooks and upper cuts to the head that saw the former The Contender star drop Sawyer in the second on his way to TKO in the sixth round.

All in all, it was good night at the fights in northern Virginia. Although not the barnburner that last night’s Fonfara-Cleverly fight was, Peterson-Diaz was nonetheless highly entertaining and worth the watch.