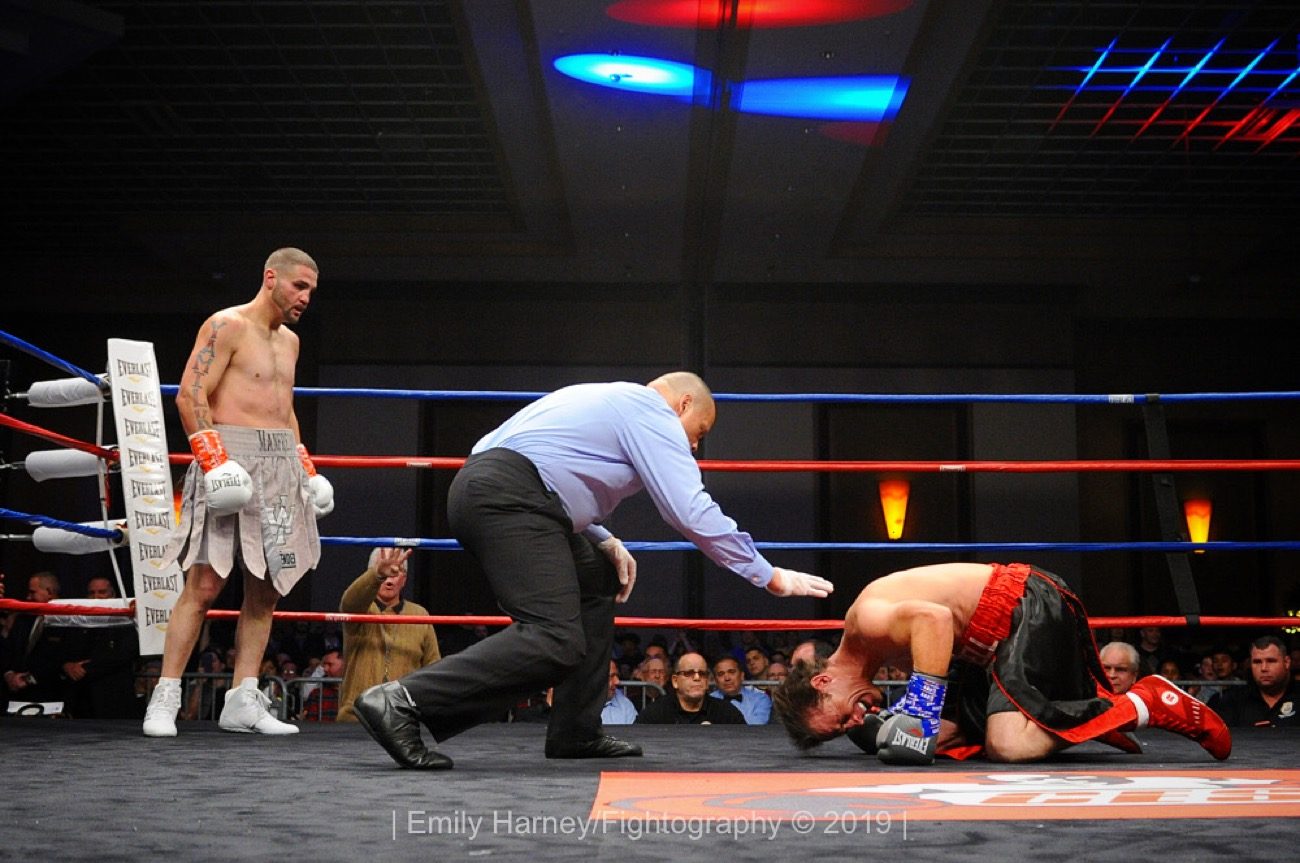 Former International Boxing Organization middleweight world champion Peter “The Pride of Providence” Manfredo Jr. made a successful return to the ring as he destroyed Melvin “The Romantic Redneck” Russell in just seventy-nine seconds in the first-round, from a powerful left hook to the body that knocked down Russell, who was unable to get up from the canvas and beat the ten-count.

This main event bout was promoted by Jimmy Burchfield’s Classic Entertainment and Sports, and was one of four bouts that were televised by UFC Fight Pass from Twin River Casino Hotel in Lincoln, Rhode Island, in front of a sold-out crowd of approximately 2,000 fans, who constantly chanted “Peter” throughout the bout.

Manfredo dominated the first-round of their scheduled ten-round light heavyweight bout. He landed whatever he wanted on a defenseless Russell, as he chased him around the ring, and connected on several punishing jabs. He then landed a brutal left hook to Russell’s body, which caused him to immediately slump to the canvas in agony, where he lay for several minutes before getting up on his own power. Russell might have broken a rib from the punch that Manfredo landed. This was the quickest knockout of Manfredo’s professional career. His only other first-round knockout was in his fourth bout against Ron Carnell.

This was his first fight in three and a half years. The last time he was in ring was in May, 2016, when he obtained a split decision draw against Vladine Biosse. This fight was the heaviest weight (170-pounds) that Manfredo has fought at as a professional.

Manfredo, who will turn thirty-nine-years-old in two days, improved to 41-7-1, 22 KOs. He is unbeaten in his last five bouts and eleven of his last twelve. His lone loss during this stretch was a fifth-round knockout to former world champion Julio Cesar Chavez Jr. Manfredo is 8-0-1 at Twin River Casino Hotel, and it was the twenty-third time that he has fought in Rhode Island.

When asked after the bout by a ring reporter, if he was going to fight again, Manfredo would not say one way or another, despite being pressed for a definitive answer.

Manfredo, a three-time world title challenger, who rose to fame on season one of the Contender, a reality television series, in which he finished runner-up to former world champion Serigo Mora, dedicated this fight to his grandfather Louis Manfredo, who recently passed away.