Paulie Malignaggi says the drug that Conor Benn tested positive for isn’t one that you can accidentally take. Malignaggi feels that the fight between Benn (21-0, 14 KOs) and Chris Eubank Jr should be called off for Saturday night because it’s too risky.

Like a lot of fans, Malignaggi isn’t surprised that the organizers are trying to find a way to allow the Eubank Jr vs. Benn fight to still go ahead because there’s so much money on the table. Malignaggi says that when a lot of money is at stake, fighter safety takes a backseat.

As Malignaggi points out, if this were any other sport, the athlete that tested positive would be suspended or banned instantly, but not in boxing.

“Conor Benn has failed a doping test. My first take on this is that’s not a drug that you can take on accident,” said Paulie Malignaggi on Paulie TV about Conor Benn’s failed drug test for the banned substance clomifene.

“I don’t think this fight should happen regardless of anyone’s opinion. You have a failed drug test here, and I hope this fight doesn’t happen. I know I’m hearing that they’re still trying to make it happen, but we’ll see.

“It’s frustrating and unfortunate. This would have been a very interesting fight. In any other sport, the athlete would be banned or suspended instantly without questions asked. Only in boxing can this failure happen, and people are still talking about maybe there’s a way the fight can still happen.

“I don’t know if the drug that Conor Benn failed for or if there’s another hidden use that it can do to benefit athletes. The fact that it’s on a banned list shows that there is something. It could also be a masking agent that can prevent positive tests for other drugs that somebody is taking.

“I’m not saying it’s obvious with Conor Benn, but he did get stronger recently. This was also a weird fight where they were meeting at a different weight at a catchweight. Naturally, they’re separated by three weight classes.

“So this isn’t like a normal fight that you’re used to seeing ever in boxing until recent times. I’m one of those people that think the media and the TV networks cause a lot of the fighters to start doping because they had such a high demand for the constant weight class jumps.

“It’s not really something that’s possible unless you’re doping. You start to consistently have weight class jumping and making weight classes irrelevant; you’re going to naturally invite performance enhancers into the sport, and that’s really frustrating to see.

“It’s a joke what they’ve turned this sport into. You’re going to be inviting these types of situations where guys are failing doping tests. Even if they don’t fail, they’re forced to do this type of thing.

“If you have a sport full of dopers, what happens? If you’re a fighter, you’re going to dope yourself to protect yourself because if you go in clean against a doped-up fighter, which is more than likely once you reach a high of a certain level, you probably are fighting a doped-up fighter.

“This isn’t a Rocky movie. Nobody beats a doped-up fighter when you’re clean. Benn and Eubank, they’re trying to figure out a way for it to still happen. Why? Because there’s so much money on the table. All of a sudden, safety becomes not the priority anymore.

“As soon as money becomes so high and you can put safety aside, they try to do it. 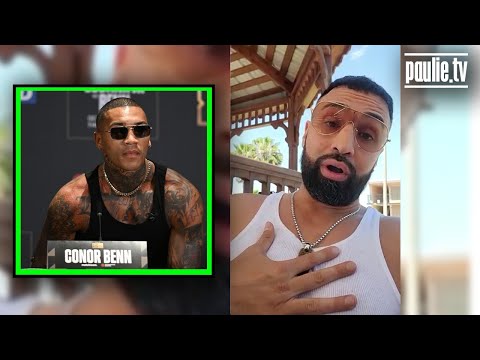