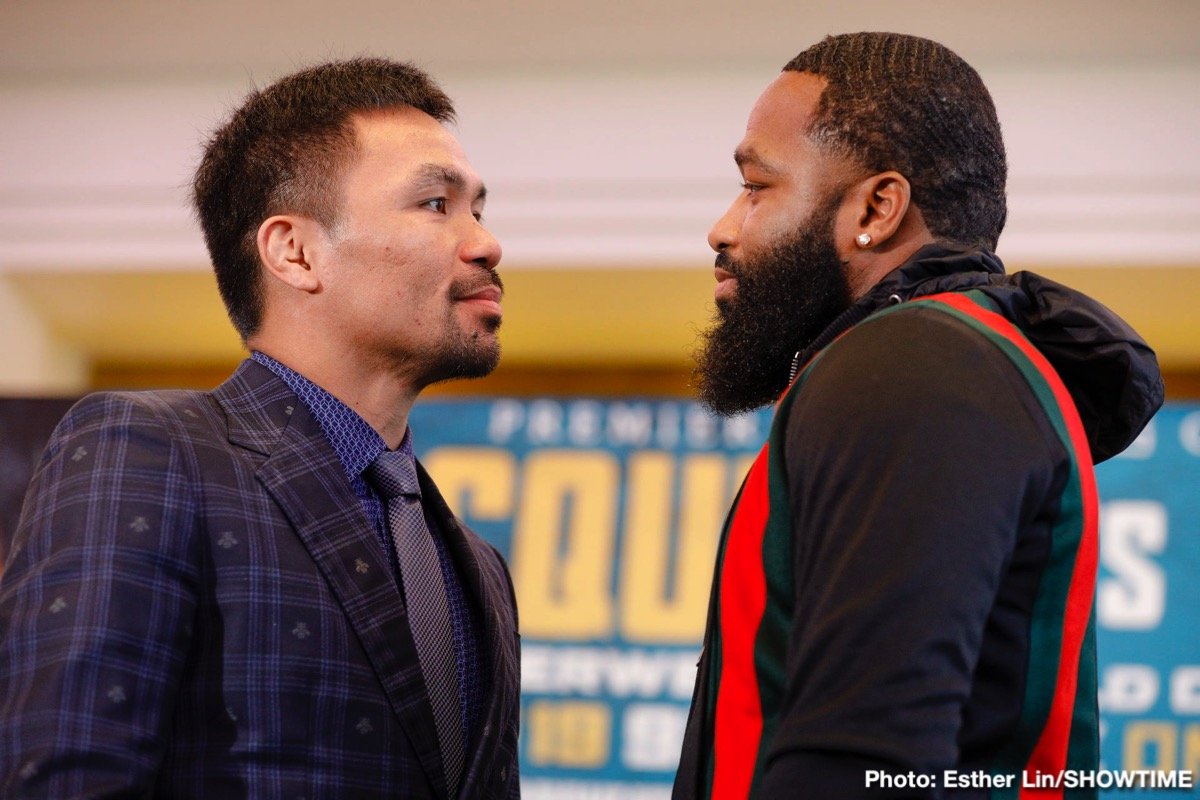 We’ve read all about the KO game-plan Manny Pacquiao and his team has been formulating ahead of the January 19th fight with Adrien Broner. Pacquiao, who turned 40 last month, regained the satisfying taste a KO win can bring in July, when he brutalised Lucas Matthysse to take the version of the WBA welterweight belt he will defend against Broner in Las Vegas. And Pac-Man wants more.

Reportedly looking great in training – where he is back working with Freddie Roach – Manny has been displaying speed of hand that would make a man almost half his age envious. And, according to Buboy Fernandez, when Pacquiao has hit the pads, it has “sounded like an explosion.” It all points towards a possible stoppage win over Broner at The MGM Grand, right?

Broner is of course a different proposition to the faded Matthysse and he is a whole lot younger. Also, Broner is said to be training like never before for this, perhaps the biggest fight of his entire career. Broner has slimmed down and he, like Pacquiao, is reported to be hitting harder than ever. It should make for a good fight later this month, maybe even a great one. But if Pacquiao is able to do what no other Broner foe has done, and render “The Problem” unconscious, would this see the end of Broner, at least at anything approaching top-level?

Broner, to his credit, has bounced back from the humiliation of defeat; three times. For a man with as big an ego and as much self-belief as the ever-vocal Broner has, plenty of fans wondered how the heavy, two-knockdown decision loss to Marcos Maidana would affect the brash and at times classless fighter. Broner licked his wounds and he was able to come back from the 2013 loss. Broner was also able to come again after losing a wider decision, this one to Shawn Porter, and then an even wider one, to Mikey Garcia. But in all three losses, Broner at least had the satisfaction of managing to hear the final bell.

If Manny is able to lower the boom on him and leave him in a heap in a dark room (as Floyd Mayweather describes a KO, something he has never experienced himself) would this prove to be too much for Broner to deal with? Would we perhaps see Broner lose all the remaining confidence and arrogance he has? Plenty of fighters were either never the same after suffering their first KO defeat, or they never fought again. Might Broner be added to this list?

Or, on the other hand, if Pacquiao – who has been KO’d before – got stopped on January 19th, would that signal the end of the future Hall of Famer’s career? There will be plenty on the line come Jan. 19th, that’s for sure.