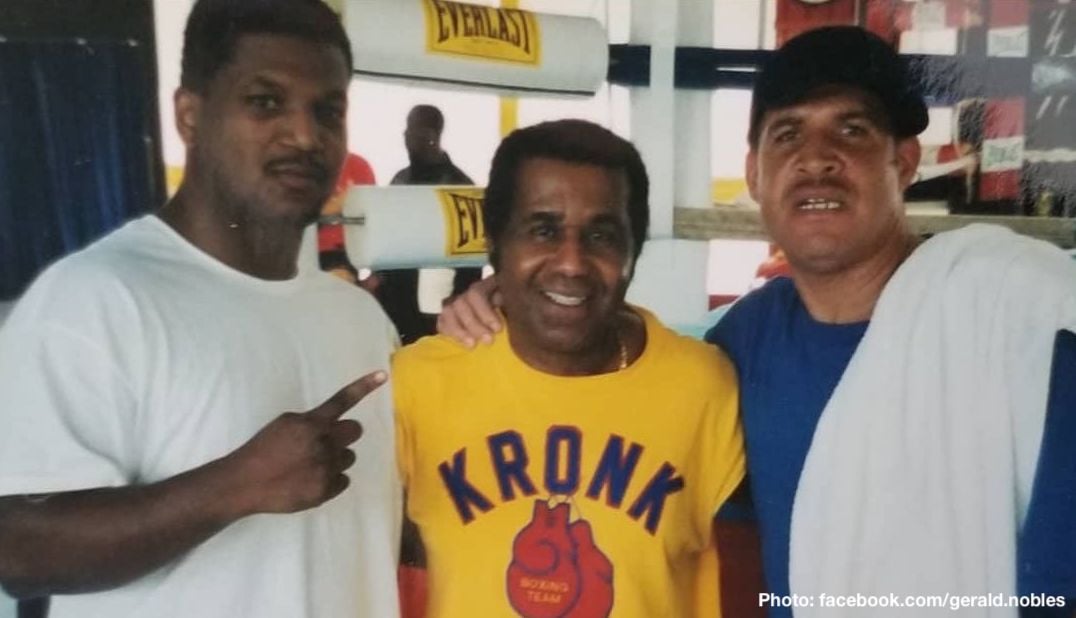 Exclusive interview by James Slater – Philadelphia’s Gerald Nobles was a noted power puncher during his 1995 to 2007 pro career. Well known in the gyms as a man who would really make the top heavyweights he sparred with work hard, Nobles was himself unable to secure a world title shot. “100-percent frustrated” over this years into his retirement, “The Jedi,” as Nobles was called, says today he is certain he would have won at least a portion of the world title had he been afforded the opportunity.

Here, the man who walked away with a 26-1(21) pro ledger, speaks exclusively with Eastside Boxing:

Gerald Nobles: “I had 36 fights with 32 wins. But after the [Olympic] trails, when I had knocked out the number-one guy, I dismantled him in two-rounds, I decided I wanted to go pro. You know, you can’t eat trophies! I needed the money.”

Q: You are well known in the fight fraternity for having been a rough and tough sparring partner who worked with the very best. Can you list some of the big names you sparred?

G.N: “Oh, there are too many names to mention. Lennox Lewis, Larry Donald, Oleg Maskaev, Tim Witherspoon, Clifford Etienne, Fres Oquendo……the list goes on. Back then, any guy that was in the top-10, I would spar him. But these guys, they just wouldn’t fight me for real. I was breaking ribs, bones, and these guys wanted no part of me in a fight. And let this sink in: I was working these guys over whilst wearing 20-ounce gloves. In a real fight I would have worn 10-ounce gloves. The damage I would have done then. Think about that.”

Q: You knocked down the rock-chinned Oliver McCall during a sparring session?

G.N: “Yeah, I put him down, I knocked him down – down, not out. It was in Ohio. I was with Don King at the time and I was working with McCall. He was easy work for me, real easy work. I was pretty quick and I beat him up. I was quick and I also hit hard – I could get from A to B. As a matter of fact, [Mike] Tyson’s sparring partners, they would tell me to my face that I hit them harder than anyone else ever did – Tyson included. You can ask these guys yourself. But that’s why they didn’t wanna fight me for real.

“In boxing, it’s who you know. Back then, I didn’t know anyone. I was basically learning the sport by myself. If I had had an Emanuel Steward or an Angelo Dundee, or a Kevin Rooney with me, they would have got me where I wanted to go. They would have had the muscle to get me to the mountain top, where they had been so many times before with other fighters.”

Q: What makes a great puncher?

G.N: “It’s just natural. You are born with it. I would work hard of course; I’d hit the bag with 300 straight punches to increase my endurance. But you can’t just work hard and turn into a George Foreman, an Earnie Shavers or a Sonny Liston. Punching power, it’s a blessing. My left hand was my signature punch, my crumbler. I would crumble guys with it.”

Q: Your sole loss came against Nikolai Valuev, when you were disqualified in the fourth-round. What happened?

GN: “If you knew me as a fighter, you’d know how I would get stronger as the fight went on. I knew it would take longer to knock him out, a massive guy at 7-feet tall, compared to a smaller guy. And that’s all Valuev was – big. He was a big punching bag. They robbed me in that fight. They said I was hitting him low. But I wasn’t, I was hitting him to the body. I always wondered why Don King didn’t make a real big protest over what happened in the fight. I know I would have stopped Valuev had they let the fight go on. He was just big and I had to punch upwards, and it would have taken maybe eight or nine rounds. It’s terrible that that is the only loss on my record, it really is.”

Q: If you had been granted a world title shot, who would it have been against?

GN: “At the time I was the closest I ever came to getting a world title shot, after I beat Bruce Seldon; I broke his ribs, there were four guys [who held a world title]: Chris Byrd, Lamon Brewster, John Ruiz and Oleg Maskaev. I’d have fought them all on the same day! But they would not face me. I’d go to camp to spar a top contender, say a Fres Oquendo, and all the top trainers would be there. They’d see me work him over and they’d think, no way am I letting this guy in with my fighters. It is who you know. It’s the same with a lot of things in life, not just boxing.

“I fought a lot of journeymen, guys who took some big names into the later rounds, and I stopped them all quick, or I beat them in each round to win a wide decision. It’s 100 percent frustrating today, looking back. Guys I would break apart, breaking noses, ribs and jaws, they would go on to get a world title shot. But that’s life, it is what it is.”

Q: Did Don King not do anything to get you the big fights?

G.N: “Well, Don got me the Valuev fight. But I had to go to Germany. With Don, his thinking was, if he had the champion and the challenger, he would let them fight. Because if he had both guys it wouldn’t matter to him who won; he would still have the champion either way. After what happened in the Valuev fight I was overlooked. I was avoided.”

Q: Who gave you your “Jedi” nickname?

G.N: “I gave that to myself. I love the ‘Star Wars’ films, and a Jedi is a good guy, he is fighting for the right cause, he is the light fighting the darkness. But the way my career tuned out, I was also a ghost, in that no-one wanted anything to do with me outside the closed doors of the gym. I was too dangerous for my own good.”

Email
WhatsApp
Tweet
Share
140 Shares
Previous boxing news: Pacquiao Vs. Broner: Would A KO Defeat Signal The End For “The Problem?”
Next boxing news: So Which Welterweight Champ Has It “Easiest” In His Next Fight: Spence Or Crawford?
You are here: Home / Boxing History / The Man Who Broke Bones In Sparring…….. and couldn’t get a world title shot
Follow @boxingnews24