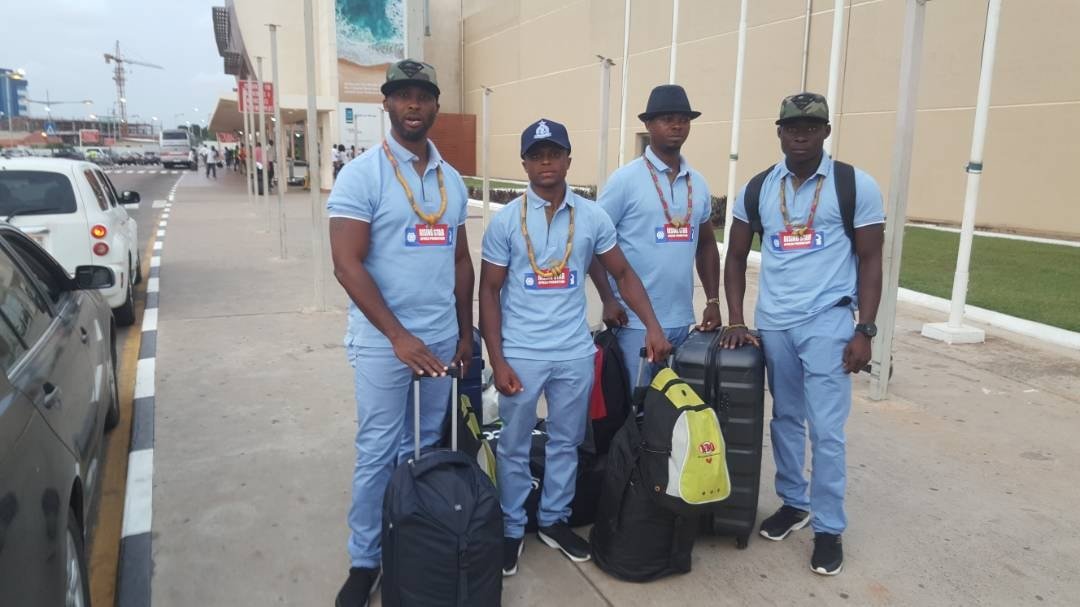 23 year old Dogboe left Accra on Sunday night in the company of his dad and trainer, Paul Dogboe in a 4-man technical team highly confident he will be crowned Ghana’s new world champion at the end of fight night at the Liacouras Centre inside the Temple University Campus come end of this month and is leaving no stone unturned in pursuit of his dreams.

The Ghanaian who defeated another Mexican, Cesar Juarez at the Bukom Boxing Arena in Accra back on January 6 this year to set up the meeting with the American born Mexican, has undergone stringent preparations and has vowed to return home with the world title firmly strapped to his waist and has assured his fans of his readiness to make history.

“When you hear the lion roar, then you know it’s time for war,” Isaac Dogboe said in a video shared on the Dornu’s Corner boxing magazine page on Facebook.

“I just want to let all Ghanaians, everyone, all my fans know, I thank you all so much for the support, keep praying for Team Dogboe. I am feeling strong and I promise you we are going for victory,” Dogboe added full of poise.

A 2012 Olympian for Ghana at a mere age of 17, Dogboe previously fought five times in the United States at the start of his pro career but this will be his first return to America since April 2015 when his record stood at 7-0.

Having started his career in Europe before going to America, he returned to Ghana to announce himself to his countrymen and gain their support. Soon after, young Dogboe annexed his first title, the West Africa Boxing Union (WABU) by defeating countryman, John Oblitey Commey in November 2015.

He went on to claim the WBO Africa featherweight belt just over a month later after opponent, George Krampah retired in round 7 of their scheduled 12-rounder at the Accra Sports Stadium on Boxing Day 2015. Following two successful defences against compatriot Michael Pappoe and Tanzania’s then undefeated Edward Kakembo, Dogboe went on to defeat tough Filipino, John Tabanao on points in Accra in August 2016 to add the WBC Youth as well as WBO Oriental featherweight titles to his collection.

In a surprise move however, Dogboe moved down in weight to beat Argentina’s Juan Evaristo Aristule via a round 7 TKO in Auckland, New Zealand in December 2016 to capture the WBO international super bantamweight title, one he successfully defended back in Accra courtesy a round 6 stoppage of another Argentine, Javier Nicholas Chacon in his one and only fight of 2017 at the Bukom Boxing Arena on July 22 last year of course.

The victory pushed the ever improving Dogboe into the top 3 of the WBO’s junior featherweight ratings which consequently set up the fight against the highly rated Cesar Juarez, which’s purse bid was won by Paul Dogboe’s Rising Star Africa Promotions who duly brought the clash for the interim world title to Accra on the first Saturday of 2018. A dominant, clinical and authoritative performance by the young Ghanaian culminated in a resounding round 5 technical knockout victory to not just annex the interim belt but also position him as mandatory challenger to the world title itself held by Magdaleno since November 2016.

26 year old Magdaleno of course defeated the also highly rated Filipino slugger, Nonito Donaire on unanimous points to win the title and successfully defended it courtesy a round 2 stoppage of Brazilian, Adeilson Dos Santos in April last year but has not fought since due to a combination of injuries and weight issues including cancellation of a scheduled defence against Juarez late last year.

Now the two combatants who once sparred in Las Vegas back in 2015 with a combined record of 43-0, 30 KOs are set for the clash in Philly where someone’s ‘O’ certainly has to go but Dogboe is confident it won’t be his.

“And the new WBO super bantamweight champion of the world, Isaac Royal Storm Dogboe. We are going to Philly to bring the world title I assure my fans that nothing will stop us, we will stop Magdaleno for disrespecting us,” Dogboe said in a video with his dad and trainer, Paul from the Schiphol Airport in Amsterdam where they are in transit on way to the US for the big fight next week Saturday.