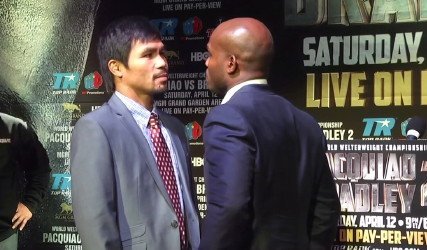 If you wondered what Manny Pacquiao’s strategy will be for how he plans on beating WBO welterweight champion Tim Bradley, Pacquiao revealed it in an interview this week. The strategy is simple. Pacquiao says he plans on throwing a lot of punches to force Bradley to deal a lot of incoming. Whether that’ll work or not is another thing.

Bradley isn’t someone that is going to just stand around and let Pacquiao throw 1000 punches at him in a 12 round fight like Joshua Clottey did against Pacquiao in 2010. Bradley has already said that he’s going to use a lot of movement against the Filipino fighter, and choose when and where he wants to mix it up with him.

Pacquiao said via esnewsreporting that he’s going to fight like a “Young Manny Pacquiao, [be] aggressive, throwing a lot of punches. I want to maintain my name at the top, and prove that I can still fight.”

There’s little question that Pacquiao can still fight. He proved that in whipping Brandon Rios last November in Macao, China. The thing that Pacquiao has to prove against Rios is that he can do a better job cutting off the ring against him than he did in their fight in June of 2012, because Pacquiao did a rotten job of forcing Bradley to fight. Pacquiao also did a bad job of fighting for the full three minutes of every round. He looked like he was taking long portions of each round off, and this enabled Bradley go steal the round with minimal effort in the last portions of the rounds.

Bradley is probably going to try the same trick in their rematch on April 12th at the MGM Grand in Las Vegas, Nevada. We saw in Bradley’s last two fights against Ruslan Provodikov and Juan Manuel Marquez that Bradley would come on in the last part of the round to make sure that he won it on the judges score cards. That’s something that he’ll no doubt be trying to do against Pacquiao again. Bradley will likely move for 2.5 minutes of the round, and then go after Pacquiao in the last 30 seconds to try and impress the judges in order to win the round.

Pacquiao can still throw a lot of punches if he moves his feet quick enough to stay close to Bradley. However, if he lets Bradley circle in front of him without cutting off the ring, then he’ll be stuck dealing with Bradley coming after him when and where he wants to in the last seconds of the rounds.