Earlier today, Chris Mannix of Sports Illustrated reported that Tank and Ryan have “agreed to the framework of a deal” for a catchweight at 136 pounds for January in Las Vegas.

The major obstacle standing in the way of the Davis-Ryan fight getting made is the networks. Mayweather Promotions, Tank is signed with, wants Showtime to be the sole distributor of the fight in the U.S. Ryan is with DAZN, and they, not surprisingly, want to show the fight as well.

Unless Mayweather Promotions changes its mind about Showtime being the lone distributor in the United States, we won’t have a Davis vs. Garcia fight.

“Mayweather Promotions, which represents Davis along with Al Haymon, has insisted that Showtime be the exclusive pay-per-view distributor in the U.S, sources told SI,” said Chris Mannix to Sports Illustrated.

Ryan has been talking about the Tank Davis fight on a near daily basis on social media. He’ll be happy once this fight is made, and he can show the boxing world whether he’s on the same level as Tank or not.

With the way De La Hoya was smiling, he seemed to think the fight would take place. We’ll soon see. If it doesn’t, it’s important that Ryan and Tank start fighting better opposition because both of them have arguably been swerving elite-level fighters their entire careers.

Ryan’s opposition is a little worse than Tank’s, but not by much. Since Ryan (23-0, 19 KOs) is now campaigning at 140, he needs to take on the likes of Regis Prograis, Teofimo Lopez, Jose Zepeda, Jose Ramirez, and Subriel Matias in that weight class.

Fighting Javier Fortuna isn’t going to cut it if Ryan wants to be taken seriously at light welterweight.

Tank Davis should enter the mix to battle for the undisputed lightweight championship against the winner of the Devin Haney vs. Vasyl Lomachenko fight. It would be nice if Tank (27-0, 25 KOs) were to fight Shakur Stevenson while Haney & Lomachenko fight it out. 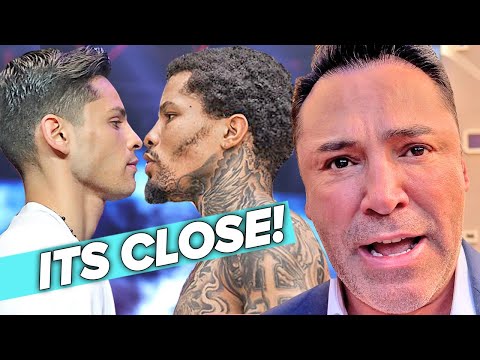