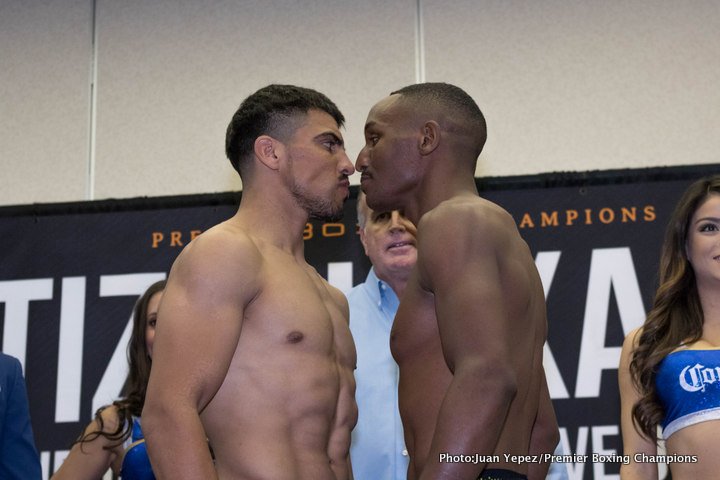 IBF Female Featherweight World Champion Jennifer Han was also at Thursday’s press conference in her hometown, as she prepares to take on top contender Lizbeth Crespo in a world title defense.

“We’re ready to go once again. I’m here for what’s mine, and that’s a victory. Alexander is a nice fighter and I’m sure it’ll be a war.

“The victory is the only thing on my mind. I’m here to defeat Devon Alexander. I just need to trust my training and I know it’ll give the result I want.

“I’m definitely looking for the knockout. I want to put on a great performance for these fans. They’ve supported me throughout this promotion and I owe them something memorable.

“Devon and I have known each other for a long time, but that all goes out the window on fight night. It’s going to be a brawl. We’re going to do what we have to do to get this win and move on to the next step of my career.”

“No one wants to hear me say what I’m going to do. People want to see me beat Victor Ortiz. Nothing else matters. I’m prepared to come in and win this fight. I’m going to win and get back to the top.

“I’m so blessed to be in this position. I’ve had ups and downs in my life and career, but it’s all been leading to this moment and this part of my career. I’ve got something special coming for the fans.

“I’m really excited to be fighting in El Paso. This is clearly a fight town and I can’t wait to give them a great show on Saturday.

“This fight is so important to me. I know how important it is to Victor too. We both need these wins to get to where we want to be in the future. Only one of us can move on, and It’s going to be me.”

“This has been the best camp of my life. Everyone always says that, but this has truly been the best one I’ve ever had. I have a great team that I’m very lucky to have.

“It’ll come down to who has the will to win. There’s a stigma that people on the ‘A side’ haven’t been through trials and tribulations. But I’ve been through more than anyone can imagine.

“I’m not playing around. This is no joke to me. This is all I’ve ever had. When I was a kid with no heat and the lights were off, boxing was all I had. Saturday night I’m getting my hand raised and I’ll be one step closer to a world title.

“Saturday night is going to be fireworks. There’s no secrets what’s going to happen when I fight ‘Porky’ Medina. He’s coming to break me down, and I’m coming to box.”

“I am honored to be a part of this card and compete in a big fight like this in a fight city like El Paso. I’m looking forward to putting on a great show for the fans.

“I’m determined to get this win. Caleb Plant is a good fighter, but he’s never fought anyone as tough as me. I don’t think he’s going to be ready for my pressure.

“I’m always going to come forward and look for the knockout. That’s what we train for and that’s the only thing on my mind. I have to go right through Caleb Plant to earn another world title shot.”

“I want to thank El Paso for always being there to support me. I couldn’t do what I do without all the fans.

“I’m truly blessed to have the help and support of me team. We work hard together and we win together.

“I’m thankful to Lizbeth Crespo for coming to El Paso. I’ve had problems in the past getting opponents here who are ready. She looks ready to go and we’re going to put on a great show.

“This is such a talented card full of world class fighters. If the fans show up, we’re going to keep having big events like this in El Paso.”

“I am thrilled to be here. It’s an honor to be fighting Jennifer Han. She’s the queen of El Paso and I’m excited to fight her in her backyard.

“I’m focus and determined to win this fight. I’ve had a wonderful training camp and I’m looking forward to taking home the victory for Argentina.”