Paul Williams, AKA “The Punisher,” really did seem to be on the road to greatness. The tall (as in Thomas Hearns-like height and reach) southpaw was capable of pumping out 100 punches a round in a fight, and this he did back on July 14 of 2007, when he scored a unanimous decision victory over the feared Antonio Margarito, the win seeing Williams take the WBO welterweight title.

25 year old Williams was brilliant against the rough, tough and incredibly durable Mexican, his superior punch output overwhelming Margarito. Williams was slinging out so much leather. “Tony” could have been forgiven for feeling dizzy. And discouraged. Margarito, who was making the 8th defence of his belt, got going later in the fight, and Williams’ face was marked up some, but the points deficit could not be overcome. By the end of the fight, Williams had thrown well over 1,000 punches, with many of them landing. Margarito had slung out over 600 punches. 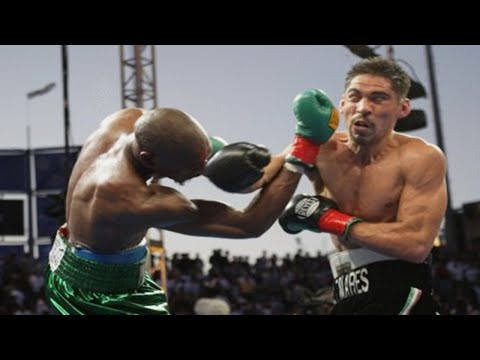 Indeed, this fight was fought at a torrid pace, with challenger Williams setting the furnace-like rate of punching. Williams commanded the first half of the fight, while Margarito, 34-4, came back to win his share of the later rounds. Later, when adding up their totals, plenty of people in press row had the fight close, with a good few having the fight scored a draw. Officially, Williams won by scores of 116-112 and 115-113, 115-113. 29 year old Margarito was left grumbling how he had “been robbed.” He hadn’t, and Williams was now a spotless 33-0 and that aforementioned greatness seemed to some to be ahead of him.

Instead, in a huge upset, Williams lost his title and his unbeaten record in his very next fight, this against Carlos Quintana, who won a 12 round UD over him. Williams, however, destroyed Quintana inside a round to become a two-time champ in the rematch. Williams then won an interim belt at 154 and, failing to land a mega-fight with a Floyd Mayweather or a Kelly Pavlik, “The Punisher” fought Sergio Martinez. The first fight was a controversial majority decision win for Williams, while Martinez scored a stunning 2nd round KO in the return. Williams fought just twice more, before he was tragically left paralysed due to a motorbike crash in May of 2012.

Williams, though he fell short of greatness, certainly made a huge impact on the sport, and at his best, as he was in the Margarito battle, “The Punisher” was a special fighter.