This was all quite a long way away on July 18, 1981. Spinks, the unbeaten contender who had won Olympic gold at the 1976 Games, challenged Muhammad for the WBA light-heavyweight title. Spinks was 16-0 and he had beaten two fine fighters in Yaqui Lopez and Marvin Johnson. Muhammad was making his third defence and he had beaten a number of big names, including Johnson (who Muhammad beat to become champ) and Matthew Saad Muhammad. 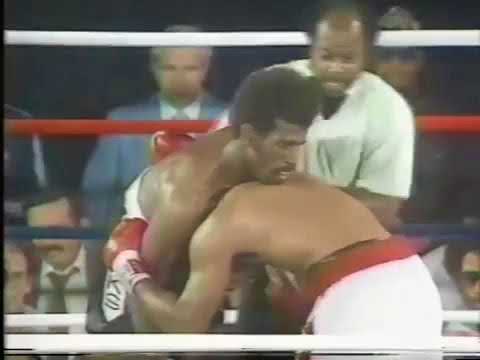 Muhammad had also lost to Victor Galindez in a failed challenge for the WBA crown in 1977. And Muhammad was, at the time of facing Spinks, coming off a decision loss to Renaldo Snipes, this up at heavyweight (Muhammad having wanted to test the waters at heavyweight and coming unstuck). Prior to defending against Spinks and his “Jinx,” Muhammad has struggled quite badly to make the 175 pound limit. That aside, there was no taking away from Spinks’ brilliant performances.

A clever boxer who had a hard-to-figure-out style (hence the “Jinx” nickname), Spinks fought well. Boxing Muhammad and later busting him up and knocking the soon to be ex-champ down, Spinks looked like he was enjoying himself. He was beating a fine and respected champion and Spinks had time to smile. Muhammad, unable to see out of his right eye, gamely battled on through to the final bell.

When he got there, Muhammad was met by wide scores against him – 146-138, 145-139 and 144-140, all for Spinks. Spinks would go on to become one of the greatest light-heavyweight champions of the modern era, unifying the belts with wins over Dwight Muhammad Qawi (WBC) and Eddie Davis (IBF) and making an amazing ten light-heavyweight title defences in total.

Muhammad never achieved his goal of winning the heavyweight crown but he did come close to regaining IBF light-heavyweight title in 1985, when he dropped a split decision to Slobodan Kacar in a fight for the belt Spinks had vacated with his move up to challenge Holmes.

Interestingly, both Spinks and Muhammad were KO’d just once each; Muhammad by Arthel Lawhorn in his final fight, and Spinks by….well, you know who by.