Of the three memorable heavyweight battles Riddick Bowe and Evander Holyfield engaged in in the early and mid-1990s, the first fight is recognised as the best. Yet it could certainly be argued how the third and final fight was the most dramatic. Back in November of 1992, Holyfield was an unbeaten 30-year-old who was in his fighting prime. Holyfield lost in a war.

By the time the third fight with Bowe came around, Holyfield was 33 years of age, he had been beaten by Michael Moorer and, worse of all, he suffered an apparent heart attack in the Moorer fight. Since then, having come back after a short-lived retirement, Holyfield had beaten Ray Mercer in a hard fight. Yes, Holyfield had beaten Bowe in fight-two, but how much did he have left upon entering the right for the rubber-match?

27-year-old Bowe had bounced back after being outpointed by Holyfield in their rematch; winning the WBO title and smashing good fighters Herbie Hide and Jorge Luis Gonzalez to KO defeat. Dubbed “The Final Chapter,” Bowe-Holyfield III would mark the ending of a savage rivalry.

As it turned out, Holyfield’s heart was fine, yet he had another serious ailment. Holyfield was battling Hepatitis A as well as Bowe. This caused Holyfield’s energy levels to go up and down during the fight. Despite this, Holyfield came within a whisker of taking Bowe out in dramatic style. In round six, an in-close Holyfield left hook crashed into Bowe’s jaw and down he went, for the first time in his career. Bowe rose yet his feet seemed to be planted firmly to the canvas as he stood, unable to move in a corner. But Holyfield’s energy had left him once again and he was unable to put together the finishing punches. Round six came to an end and Bowe was still there.

Bowe had survived what was the biggest crisis of his career up until that point in time. Then, with Holyfield knowing he was on borrowed time, that his chances of winning the fight might be compromised due to chronic fatigue at any given second, “The Warrior” went for broke in round eight. Holyfield tagged Bowe and then he let it all hang out. Bowe caught Holyfield with a monster counter-right hand that landed flush on Evander’s advancing chin. Down went Holyfield, his sheer fighting instincts being the only thing that was left. Somehow, Holyfield beat the count at ‘9,’ yet now it was his feet that were rooted to the spot.

Not to take anything away from Bowe, but had Holyfield not been afflicted with Hepatitis A, we might have seen a different outcome – to both the third fight and to the series. How close Holyfield really did come to taking Bowe out in that sixth round. 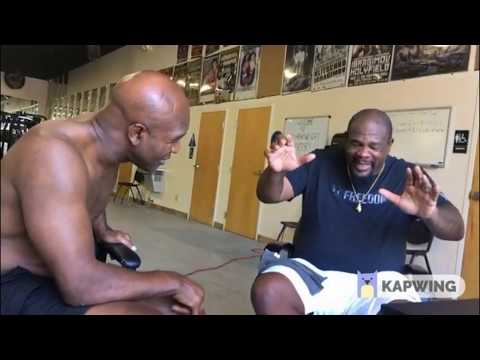