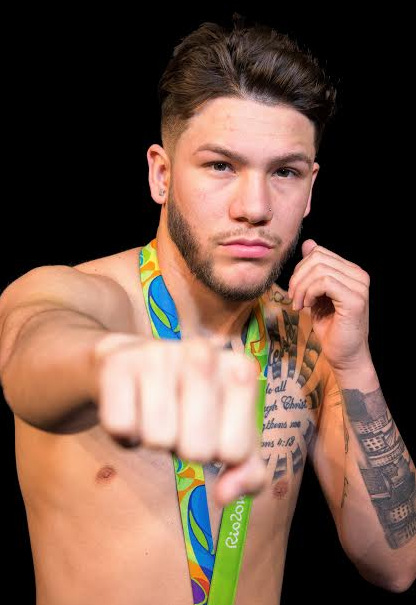 Nico Hernandez was a highly decorated amateur fighter with an impressive 94-5 record that culminated with him winning the 2016 Olympic junior flyweight bronze medal in Rio de Janeiro, Brazil. This was America’s first boxing medal since the 2008 Beijing Olympics. Hernandez earned a great amount of hardware throughout his stellar career: Silver Glove National Championship six consecutive times (the first time ever), Ringside World Championship eight years in a row, 2014 National Golden Gloves Champion, gold and silver medalist at the 2014 and 2013 U.S.A. Youth Men’s National Champion, and gold medal at the Junior Olympic National Championships in 2011 and 2012.

The twenty-one year old from Wichita, Kansas, who is promoted by KO Night Boxing will make his long awaited professional junior flyweight debut against Patrick Gutierrez (0-2) in a six-round main event. This boxing fight entitled KO Night Boxing: “History Begins” will take place on March 25th at the Kansas Star Casino in Mulvane, Kansas and will be nationally-televised on the CBS Sports Network. There have been only three other fighters: “Sugar” Ray Leonard, Mark Breland, and Paul Gonzales, who all won gold medals in the Olympics, to have their professional debuts as the main event, in their hometown, and have it broadcasted on national TV.

Hernandez was gracious enough to take time out of his busy training camp to discuss with me about winning the bronze medal at the Olympics, making the Olympic Team, why he signed with KO Night Boxing, his upcoming professional debut, and much more.

James Stillerman: What was it like to win a bronze medal at the Olympics?

Nico Hernandez: It was an absolutely amazing feeling to be fighting in the Olympics among the best amateur boxers in the world. It was the biggest highlight of my boxing career thus far and it is something that I am extremely happy that I was able to accomplish.

James Stillerman: How did you qualify for the United States Olympic Team?

James Stillerman: How difficult was it for you to compete in the Olympics without your childhood friend Tony Losey being there?

Nico Hernandez: It was extremely tough on me because not only did we both boxed together from a young age under my dad’s tutelage, but we were also really close friends. He and I always talked about competing in the Olympics together and unfortunately that did not happen. [He passed away in 2014 from an industrial accident]. Even though he was not physically there, I felt his presence with me throughout the Olympic Games, as he cheered and screamed at me while I was fighting, which is something that we always did to one another while we were growing up. Tony’s presence helped me throughout the Olympics.

James Stillerman: What made you decide to turn professional?

Nico Hernandez: When I won the bronze medal at the Olympics, I had reached the highest point at the amateur level and there was nothing else left for me to accomplish. So, I decided it was time to take the next step in my boxing career and go pro and start getting paid for fighting.

James Stillerman: Why did you sign with KO Night Boxing?

Nico Hernandez: They were everything that I wanted in a promoter. They treated me like family, they wanted me to fight in front of my hometown crowd, and they gave me a short term, one-year contract, which is what I was looking for.

James Stillerman: How has training camp been?

Nico Hernandez: The gym that I train out of [Northside 316 Boxing Club] burnt down in November, so I have had to train out of my parents’ house and go the gym in the next town over to do my sparring sessions, for the last couple of months, but other than that, it has been good. Despite the gym burning down, it has not affected my training. I am really focused for this bout, my fight preparations have gone well, and we are getting in quality sparring sessions. I cannot wait to put on a good fight for all of my fans on March 25th.

James Stillerman: What do you think of your opponent?

Nico Hernandez: Other than his record, I do not know too much about Gutierrez; however, I am not taking him lightly and I am training for this fight as I would for any other significant bout.

James Stillerman: What will it be like fighting in your hometown, in the main event, and have it broadcasted on national-television?

Nico Hernandez: It is a truly amazing experience for all of this to happen to me in my professional debut and I give all of the credit to KO Night Boxing, who has made this possible. I am extremely lucky because there are not too many fighters who can say that this has happened to them in their first pro bout.

James Stillerman: What are you goals for 2017?

Nico Hernandez: I will fight four times this year as per my contractual agreement with KO Night Boxing. I want to gain as much experience and exposure as I possibly can in every bout and try to improve upon my performance each time out.

James Stillerman: What are your strengths as a fighter?

Nico Hernandez: I am extremely good at being a fighter who can quickly adapt to any opponent. I often lose the first round in my fights; however, by the second round, I figure out what I need to do to beat them. This is what happened to me at the Olympics, where I lost the first round in every fight, but I figured out my opponent and took over the bout from the second round on, until I got to the medal round.

James Stillerman: How did you get into boxing?

Nico Hernandez: I started boxing when I was nine years old. Boxing has always been a significant part of my life growing up. My dad and uncle boxed and when my uncle went pro, my dad was his trainer. I remember when I was really young, before I got my first pair of boxing gloves, I would put socks on my hands and try to box whoever I could in the neighborhood or my dad.

Nico Hernandez: It was tough. We never had enough money, we were always behind on the bills, the gas was constantly getting shut off, and we had to heat up water on the stove just to take baths. Despite the struggles of growing up, I would not change it for anything. My dad was an extremely hard worker who worked more than sixty hours a week as a truck mechanic just to make enough money for us to get by. After a long day of work, he would take me to the gym and teach me how to box. His incredible work ethic has rubbed off on me and has really helped me throughout my amateur career.

James Stillerman: What do you want to accomplish as a professional?

Nico Hernandez: I want to become a world champion at 108-pounds and then win a world title in every division that I fight in. I admire Manny Pacquiao and I want to try to accomplish what he did by becoming boxing’s only eight-division world champion.