Usyk (20-0, 13 KOs) plans on getting into the ring after the fight to get off to an early start for the undisputed heavyweight championship promotion against Fury.

Krassyuk is hoping Fury (32-0-1, 23 KOs) will not only win this Saturday against Chisora but also give his consent to fight Usyk next because, thus far, he’s not yet agreed to the fight.

Fury has told the media that he won’t fight Usyk or Anthony Joshua, and instead will go on his ‘Bum of the month‘ journey to fight once a month in 2023, but only against lesser opposition.

Some would say that the 34-year-old Fury is off to an early start of his bum of the month club with his fight against journeyman Chisora (33-12, 23 KOs), who arguably shouldn’t be ranked in the top 15 at this stage of his career with his 1-3 record in his lasts four fights. 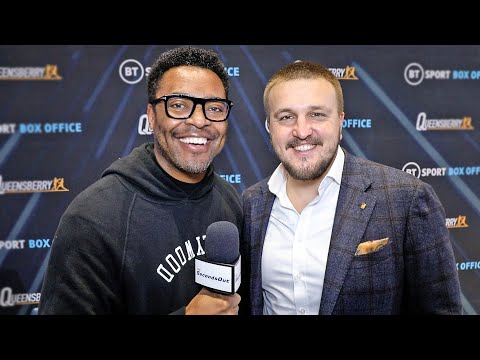 “I’m here to see him missing a slip with Usyk when he gets in the ring after he gets announced as the winner,” said promoter Alex Krassyuk to Secondsout when asked if he’ll be attending the Tyson Fury vs. Derek Chisora fight on Saturday to scout on behalf of Oleksandr Usyk.

“Actually, yes. We can’t miss this fight. Usyk will be here in attendance as well. It’s important to watch your future opponent make his moves in the ring and how he’s scared of his opponent, and maybe he’s not scared.

“The main thing is to look into his eyes and see how he’s scared of Usyk. That’s the main objective for us to be here. We have everyone on board.

“We have Queensbury, we have K2, we have Usyk’s team, we have Usyk himself, and we have our partners from Suadi Arabia to stage this fight. The only thing missing is the consent from the tall Gypsy man.

“He hasn’t said, ‘Yes, I am ready to face this small Ukrainian rabbit middleweight, who knows s**t about boxing who doesn’t know how to fight.’ He hasn’t said that he will take this fight.

“Fear is the mind-killer,” said Krassyuk when asked what is keeping Fury from signing and agreeing to a date for the Usyk fight. “First he has to win over this man [Derek Chisora].

“People are underestimating Derek Chisora. I remember him fighting Usyk. He performed something that nobody expected from him. He might cause some severe injuries. It’s still important to be very cautious when you fight a guy like Derek,” said Krassyuk.