There is nothing like an exciting heavyweight fight to get a big fight card started. And on tonight’s big bill in Gibraltar, Britain’s Nick Webb got the action going with a bang and an upset. Webb demolished Germany’s unbeaten Erik Pfeifer in two impressive rounds. Webb hurt the two-time Olympian in the opening round, starting off as he did like a train, and then Webb scored three knockdowns in round two to get the stoppage win. Webb did damage with his left hand and finished Pfeifer off with his right hand. Time was 1:51 of round two. 33 year old Webb is now 17-2(13). Pfeifer, a year the older man, lost his unbeaten record in dropping to 7-1(5). 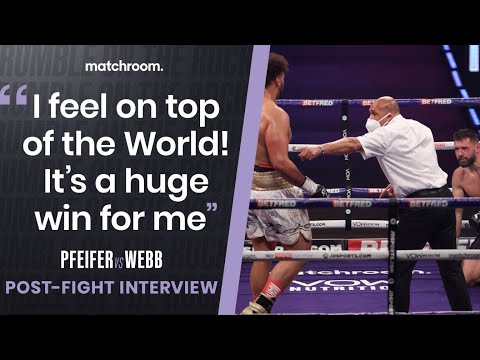 Webb of Surrey was once looked at as a hot prospect, before losses to Dave Allen and Kamil Sokolowski derailed him. Both of those defeats were upsets and Webb had to go back and regroup. This he did, winning three on the bounce in 2019. Tonight’s fight was Webb’s first since December of 2019 but he was in good shape and he showed zero signs of rust. The fight was over fast of course. Webb has revived his career and he could go on to feature in some interesting domestic fights, perhaps something bigger. Pfeifer, though, was a big disappointment tonight. It was only a while back that the German was set to face Daniel Dubois; basing things on tonight’s fight, there would only have been one winner had that match-up taken place. Pfeifer, who at age 34 doesn’t seem to have too much time in which to go back to the drawing board the way Webb did a couple of years ago, was also having his first fight since 2019, Pfeifer last boxing in November of 2019.

Maybe Pfeifer was suffering from rust. He was certainly completely unprepared for Webb’s fast attack. Definitely a good win for Webb though, and a shot in the arm for his career. “Don’t doubt me ever agin,” a victorious Webb said post-fight. So was this fast start to tonight’s action a sign of things to come? Will Dillian Whyte come out blazing against Alexander Povetkin in his must-win rematch? Will Povetkin set the pace? Will we see a KO later on in tonight’s main event? Most fans and experts sure think so. There is nothing quite a like the atmosphere and the anticipation when a big heavyweight fight is approaching. Tonight, Whyte and Povetkin will be laying it all on the line. Tonight’s card started with a KO. It will end with one, too. But which way? Whyte to get his revenge, or Povetkin to repeat his win from last August?