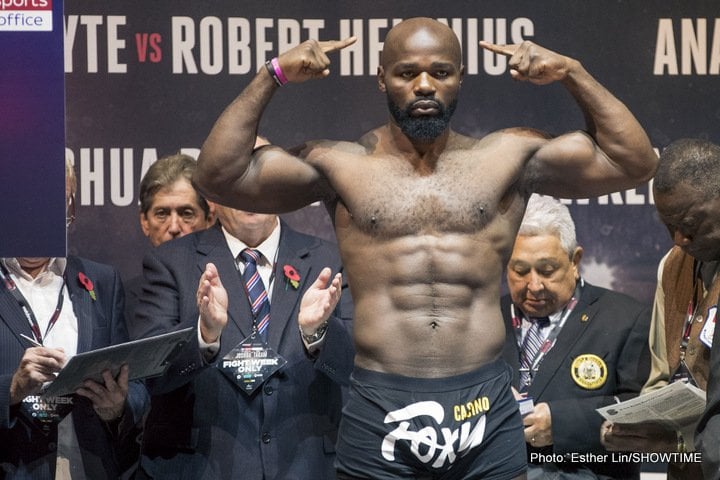 News broke yesterday that undefeated heavyweight prospect, Jarrell ‘Big Baby’ Miller had failed another anti-doping test. This meant the upcoming fight between Miller and fellow American Jerry Forrest was cancelled. Whilst it’s the correct decision to ban the serial drugs cheat Miller, sympathy has to go to Jerry Forrest who would have had to pay the physical and financial cost of a fight camp but not receive the prize, the fight. Luckily for Forrest, the ever-ready Carlos Takam has agreed to replace the disgraced Miller, and face him on July 9th.

Forrest wasn’t the only fighter whose opponent wouldn’t be able to make the bout, all be it for different reasons. Former World Title challenger Takam was set to face Oscar Rivas on July 14th, but Rivas had to pull out from that fight with an injured elbow. This meant Takam was hungry to find a new opponent, so the removal of Miller from the Forrest fight must have come as great news to the seasoned veteran.

Takam is no stranger to stepping up as a late replacement. In 2017, British World Champion Anthony Joshua was set to face IBF mandatory challenger, Kubret Pulev. The challenger would unfortunately suffer a shoulder injury ruling him out of his title shot. The fight was off, then with just 12 days’ notice brave Takam ceased his opportunity and stepped in to face World Champion Joshua. He performed well, much better than fans could have guessed he would and Anthony didn’t have things all his own way. Carlos would be unsuccessful in his challenge by way of a tenth-round stoppage, but fans and critics alike agreed, Takam put on a gutsy opponent.

This is great news for both Takam and Forrest who both had lost paydays, all be it for different reasons. However, boxing moves in mysterious ways and you never know what’s around the corner.

Jarrel ‘Big Baby’ Miller V Jerry Forrest is off according to Mike Coppinger, because ‘Big Bag’ has failed an anti-doping test AGAIN. Coppinger broke the news earlier today (27/06/2020) with the following tweet:

‘Breaking: Jarrell “Big Baby” Miller has tested positive for a performance-enhancing substance and has been pulled from July 9 fight with Jerry Forrest on ESPN, sources tell The Athletic.” As yet there has been no response from Miller, or his team, but it would be interesting to see how they could possibly turn this around.

Miller was first guilty of having PED’s (Performance Enhancing Drugs), in his system prior to the much-anticipated title clash with Britain’s Anthony Joshua. Jarrel initially denied any wrongdoing, but as further details began to emerge, he took to social media to admit his guilt. Three substances were found in his system, Human Growth Hormone (HGH) and Erythropoietin (EPO) amongst them.

Miller was banned from the sport of boxing for 6 months, a ban that many, including myself, was too lenient. A failed drug test in any sport is wrong, but in a sport where people’s lives are on the line, failure is unforgivable.

No further details have emerged as yet as to the substances allegedly found in Miller’s system, but I’m sure more information will be available soon. Where does Jarrel go from here? Here was given a second chance and it seems he has blown it, a lifetime ban could be on the cards which is a shame as Miller carried much promise.

Breaking: Jarrell “Big Baby” Miller has tested positive for a performance-enhancing substance and has been pulled from July 9 fight with Jerry Forrest on ESPN, sources tell The Athletic. Miller was set to fight Anthony Joshua last year before testing positive for three PEDs