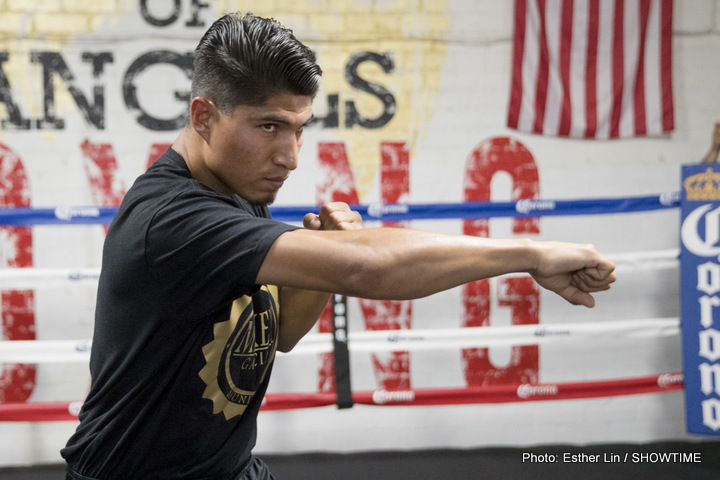 On Saturday night, January 28, 2017, twenty-eight year old professional boxer Mikey Garcia (Moreno Valley, CA by way of Oxnard, CA/pro record: 35-0-0, with 29 KOs) returns to the ring at the MGM Grand in Las Vegas, Nevada, against WBC Lightweight Champion, Dejan Zlaticanin (Podgorica, Montenegro/pro record: 22-0-0, with 15 KOs). Garcia-Zlaticanin is scheduled for twelve rounds in the lightweight division as the co-main event on the Showtime televised fight card. In the main event, Carl Frampton will defend his WBA Super World Featherweight Title in a rematch with Leo Santa Cruz.

Garcia, a former two-time WBO world champion in the featherweight and super featherweight divisions, trains in Riverside at the Robert Garcia Boxing Academy. He last fought on July 30, 2016 at the Barclays Center in Brooklyn, New York, against former WBC World Featherweight Champion, Elio Rojas. In that Showtime televised fight, Garcia knocked Rojas down four times, before referee Eddie Claudio called an end to the fight at 2:02 of Round 5. Following that win, Garcia’s record improved to 35-0, with 29 KOs, while Rojas’ record dropped to 24-3, with 14 KOs.

Garcia shared his thoughts about his upcoming fight against Zlaticanin. He said, “I’m very happy and excited for my next fight. I know that Dejan Zlaticanin is a strong, undefeated southpaw, which will make for a great fight. I’m thankful of being afforded another opportunity to show my skills. I’m ready to take on the very best in boxing, and Zlaticanin is one of the best lightweights in the sport. I want to prove that I’m better than I was before, and that I’m willing to fight anyone. The time off from boxing made me stronger and more competitive than ever.

Fighting at the MGM Grand in Las Vegas will be a great way to start the new year. I’m looking forward to performing under the bright lights on a very big stage. The last time I fought in Las Vegas was four years ago, and all my family, friends and fans traveled there for the fight. I expect the same to happen this time around. Thank you Stephen Espinoza, Lou DiBella, Al Haymon and Team Zlaticanin for making the fight a reality. January 28 will be the beginning of a great year for Team Mikey Garcia. Please know that I’m very appreciative of all my supporters and the best is yet to come.”