Mike Tyson didn’t see anything from IBF/WBA/WBO heavyweight champion Anthony Joshua or Oleksandr Usyk that he felt he couldn’t have dealt with if he’d fought either of them in the prime of his career.

Joshua lost a 12 round unanimous decision against the smaller former undisputed cruiserweight champion Usyk at the Tottenham Hotspurs Stadium in London, England.

After watching the Joshua vs Usyk fight, maybe they had a bad day that night. From that performance do you really think they could have beat me in my prime?

“It was a very awkward man, Usyk, and he obviously never fought anyone like that before,” said John Fury to BT Sport Boxing in reaction to Joshua’s loss to Usyk.

“What he [Joshua] needed to do was adopt Chisora’s game plan because he did a better job [against Usyk] than he did.

“If he’d used a little bit more of his weight and a bit more devil in his work, it could have gone better for him.

“I was surprised because he’s [Joshua] a big dude. He might have lost a little bit too much weight. What he needed to do is get all over him [Usyk] and put him under pressure and not let him settle,” John said.

Joshua tried to pressure but Usyk was too fast on his feet, and it was a hopeless caught. Once Joshua realized he couldn’t get to Usyk, he seemed to decide that he would wait for him to come forward to try and land.

It would have worked for Joshua if his timing and accuracy was better. He still could have landed more than enough shots to win the fight, but he was incapable of timing right due to Usyk’s awkward style.

“When your plan isn’t working, it’s up to your corner to switch it up and they never [did],” said Fury about Joshua’s trainer not changing things.

“They were telling him in the eighth round, ‘Be smart and work behind your jab,’ but it wasn’t working because they were in front of a master technician [Usyk].

“They played Usyk’s game from the beginning and didn’t try and change it. That’s his corner’s fault,” said John Fury.

Joshua’s cornerman Rob McCracken looked like he was out of his element in the fight, and didn’t seem to have the right answers.

Boxing fans have been calling for Joshua to dump McCracken since his loss to Andy Ruiz Jr. in 2019, but he’s stubbornly stuck with him.

At this point in his career, Joshua will probably stick it out until the end. It’s like a marriage. He’s not going to abandon McCrackey out of loyalty.

Usyk was never roughed up

“Throw the kitchen sink at him, press him all the way, make him work until he can’t work no more,” said John about what he would have wanted Joshua to do.

“Make the referee sweat and get him out of there,” said John in what he would have done if he’d been coaching Joshua last Saturday.

“You’re big enough, strong enough, believe in yourself, and get him out of there. Don’t be smart behind your jab.

“Get rough with this man. Rough him up, get him out of his comfort zone. You got to believe in yourself, and I don’t believe he [Joshua] believes in himself 100%.

“So he doesn’t have that self-belief. Does he, though? He didn’t show it that night.

Joshua didn’t try to rough up Usyk at all in the fight, and that was surprising. You would think that Joshua would have leaned on Usyk, shoved, elbowed, head-butted, low-blowed and rabbit punched him during the fight.

He didn’t do any of them, but that’s never been part of Joshua’s game. The roughhouse tactics that we saw Tyson Fury doing in his rematch with Deontay Wilder, Joshua would never do because he wants to win by following the rules, not by bending them.

It would have been interesting to see how Usyk would have reacted if Joshua had started cheating by fouling.

We saw Usyk looking at the referee when Joshua hit him with low blows, but we didn’t see AJ throwing the Marquees of Queensbury rules out the window when things started looking bad for him in the later rounds.

What would Tyson Fury have done if he was losing badly against Usyk? Would he have started fouling/cheating to try and win? One would hope not.

“He [Joshua] tasted the power early on. ‘I got to watch out, I don’t get knocked out here,'” said John.

“He tasted the straight left down the pipe, and it shook him. I think he tasted the power early on and went into his comfort zone saying, ‘You know what? I’ll box clever and stay on my feet until the end of the bell’ and that’s not trying to win.

“I’d rather get counted out trying to win than doing what he did. Well, listen, it’s was a great fight, I enjoyed it.

“I’ll say one thing. Give AJ a break because it wasn’t all his fault. It was his corner. They never had the brains to get him out of a sticky situation. You got to know if your men in the corner know the fight game,” said John.

What really seemed to put Joshua off his game in the first round was how fast and accurate the southpaw Usyk was with his straight left hands.

Usyk was deadly accurate with his left, and he was able to land it and then get away before Joshua could counter him. Only on a couple of occasions in the fight did Joshua catch Usyk coming forward, but he couldn’t do it often enough.

Joshua tried at times to be aggressive early on but he couldn’t get to Usyk to land much of anything. Even Joshua’s jabs were missing, and that made it nearly impossible for him to get into the fight.

John says he would rather have gone out on his shield than to lose by fighting passively, but I don’t think it would have worked if Joshua had lowered his head charged forward looking to take Oleksandr out.

Joshua was too slow on his feet to catch Usyk, and that’s not going to change in the rematch. 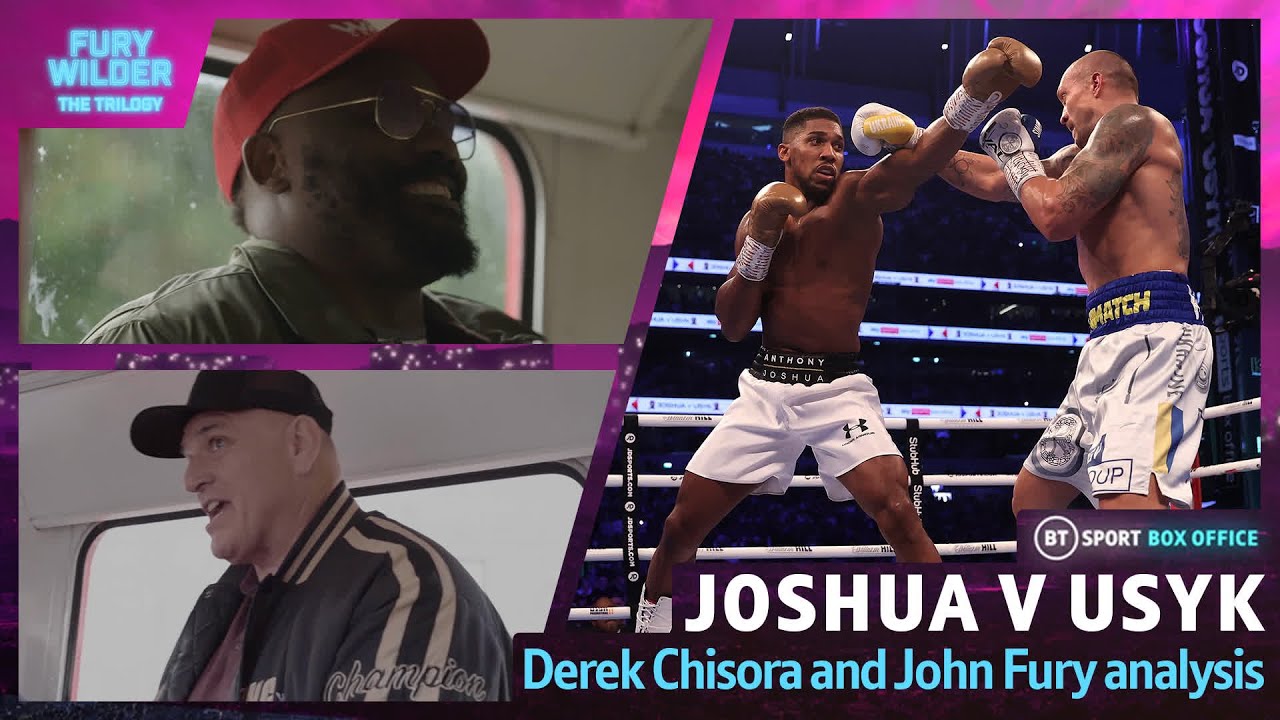