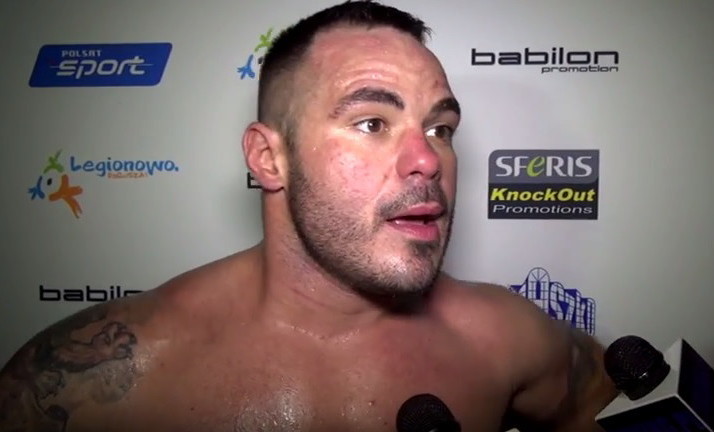 Never underestimate a heavyweight, especially a powerful one who has a ton of heart! Last night in Poland, Chicago’s Mike Mollo, having his first fight for two and-a-half years, derailed unbeaten hope Krzysztof inside a round, flattening the younger man twice, the second knockdown ending matters. 36-year-old Mollo came out fast, giving the taller man no time to get set. His power punches proving too much for the Pole who entered the ring with a 18-0-1(12) record that included a useful points won over veteran former WBC champ Oliver McCall, Mollo rejuvenated his career.

Zimnoch had not been overly active himself ahead of last night’s fight; having won one bout last October following a two year layoff. But if rust was a problem for both men, Mollo wiped it all out with his intent and his fast start. Now 21-5-1(13) the Illinois slugger scored his first win since way back in 2007, when he scored a TKO over Art Binkowski. Almost always involved in great action fights – see Mollo’s rumbles with Andrew Golota, Jameel McCline and Artur Szpilka (twice) – the veteran who rose to contender status in 2008 (getting as far as fighting in a WBC title elimination bout; losing on points to McCline in a war) may well choose to stick around and go for more fights now.

The rest from the ring obviously having done him a power of good, Mollo could get a himself a decent well deserved payday against one of the young and unbeaten US heavyweights hopes, such as a Trevor Bryan or a Dominic Breazeale; who he would arguably test and test hard. Mollo, as he showed again yesterday, is always dangerous. At age 36, he is not too old to earn himself a few more dollars before walking away from the sport in which he has always given his all.

A return match with Zimnoch could be a possibility, and I’m sure Mollo would be more than happy to take a second trip over to Poland!