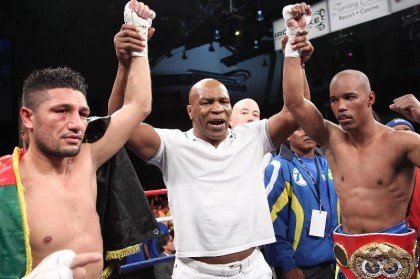 “Tyson Is Back!” was promoted by Iron Mike Productions in association with Greg Cohen Productions.

Neither fighter hit the canvas in the main event as the momentum switched back and forth throughout the fight.  The crowd was on its collective feet in the second-half of the bout as Mendez displayed superior hand speed and powerful counter punching, while IBF No. 13-rated Usmanee was the aggressor and doggedly determined

“I’m very grateful,” promoter Mike Tyson said about his company’s first promotional event.  “We had two sensational championship fights.  We got a bad break in the co-feature but it as an exciting fight and good for boxing.  I thought my fighter (Mendez) won his fight.  It was a sensational fight, good for boxing, but horrible for my boxer. He’s a great boxer.  We’d like to get (Roman) Martinez of (Yuriorkis) Gamboa next for him.”

“I’m really disappointed in the decision,” Mendez remarked.   “I’m the champion and I thought I won.”

“It was a very close fight,” Usmanee commented.  “It depends on how you judge a fight.  I was the aggressor.  It could have gone either way.”

The Robert Garcia-trained Cueller dropped the 24-year-old Marrero in the sixth round and the seventh was a Round of the Year candidate.  “I’m very happy to be champion,” an emotional Cueller said after the fight.  “It was a very hard fight.  I’ll rest and then go back to train.”

World-rated welterweight Eddie “The Lion” Paredes (34-3-1, 22 KOs) rolled to his12th consecutive victory, winning nine of 10 rounds on all three judges’ scorecards to earn 10-round unanimous decision over Mexican-invader Noe “Platnanito” Bolanos (24-9-1, 16 KOs).  Paredes is one of only two 147-pounders rated among the top 15 in the four major governing bodies, as high as No. 3 in the World Boxing Council (WBC) and WBA.

Cuban knockout artist Alexei “The Mexican-Cuban” Collado (17-0, 16 KOs) kept his perfect record intact as he broke-down junior lightweight Guillermo Sanchez (13-10-1, 5 KOs) and finished off the game Puerto-Rican fighter in the fifth round. Collado is rated No. 14 by the WBA and No. 15 by the IBF.