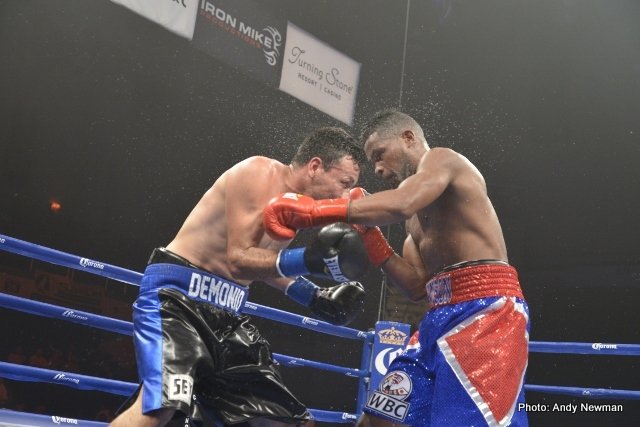 “Tyson Is Back!” was promoted by Iron Mike Productions in association with Greg Cohen Productions.

Neither fighter hit the canvas in the main event as the momentum switched back and forth throughout the fight.  The crowd was on its collective feet in the second-half of the bout as Mendez displayed superior hand speed and powerful counter punching, while IBF No. 13-rated Usmanee was the aggressor and doggedly determined Acquinity Sports, under CEO Garry Jonas, recently partnered with Hall of Famer Mike Tyson to form Iron Mike Productions, which is presenting “Tyson Is Back!” in association with Greg Cohen Promotions. Mendez vs. Usmanee represents the main event on the intitial event promoted by Iron Mike Productions, “Tyson Is Back!”, a scheduled 12-round war between the 2004 Dominican Republic Olympian (Mendez) and Afghanistan-native (Usmanee) who lives in Montreal.

Acquinity Sports, under CEO Garry Jonas, partnered with Hall of Famer Mike Tyson to form Iron Mike Productions, which is presenting “Tyson Is Back!” in association with Greg Cohen Promotions.

Mendez, rated No. 2 in the world by The Ring Magazine, fights for the first time since he captured his IBF belt this past March, dismantling defending champion Juan Carlos Salgado (26-1-1) in a rematch that ended with a sensational knockout in the fourth round. DEERFIELD, Fla. (August 5`, 2013) – Acquinity Sports, under CEO Garry Jonas, has partnered with Hall of Famer Mike Tyson to form Iron Mike Productions, which makes its promotional debut August 23 with the presentation of the “Tyson Is Back!” event, in association with Greg Cohen Promotions, at Turning Stone Resort Casino in Verona, New York.

“Tyson Is Back” will feature a World Championship doubleheader, airing live on the 2013 season ESPN Friday Night Fights finale. Jackson (36-4, 20 KOs) was world light middleweight and middleweight champion in the late eighties through the mid-nineties.  He has trained Bernard Hopkins and Shane Mosley, among the more notables, and his present fighters include three-time world champion Randall Bailey and world light heavyweight challenger Sergey Kovalev.