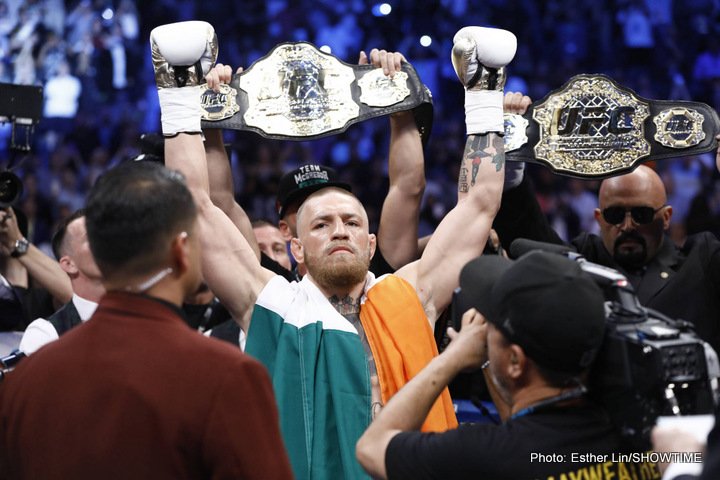 MMA star Conor McGregor lost in his extraordinary debut as a pro boxer, but he was widely expected to do so seeing as he was facing TBE, the now officially retired Floyd Mayweather Junior. But in light of how surprisingly well the Irishman conducted himself on Saturday night, showing genuine boxing skills, his time in the ring may not be over almost as quickly as it began.

It’s still too early for McGregor to decide what his next move will be, but as he said himself after succumbing to Mayweather’s fast and accurate fists, he has “plenty of options.” Dana White wants McGregor to go back to MMA, but there remain a number of potentially exciting and lucrative boxing options for the 29 year old.

Now that he has proven he can box, fans would likely be interested in seeing McGregor go up against another big, well respected name of the ring. There is of course, that well-publicised beef with Paulie Malignaggi to settle, and a fight between these two, next year some time, would be a guaranteed seller. Former two-time champ Malignaggi is still steaming over the way he was treated during his stay in McGregor’s camp – the way footage of their infamous spar session was leaked especially annoying “The Magic Man.”

While Amir Khan has expressed interest in facing McGregor in a boxing match in Ireland. This too would be a big attraction. Who would fans pick to win this one, if it took place at 154? Would Khan’s speed trouble McGregor, or would McGregor’s power trouble Khan’s chin? As hot as McGregor is right now (and he lost nothing in being beaten by Mayweather), millions of fans would likely pay to find out.

Bottom line: though some fans may have already tired of crossover fights, they seem here to stay for the foreseeable future. Will any big name boxer agree to face McGregor in the cage, or will “The Notorious” be tempted back into the ring once more?