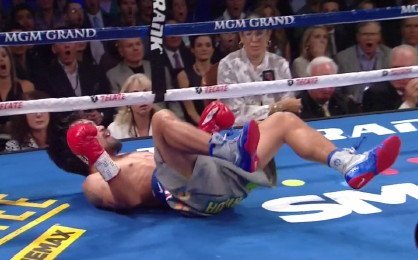 By Bill Phanco: Floyd Mayweather Sr. is advising that Manny Pacquiao stay far, far away from a rematch with Juan Manuel Marquez next year. Mayweather Sr. is concerned that Pacquiao’s ability to take head shots may have been diminished with his 6th round knockout loss to Marquez recently, and thinks Pacquiao get knocked out once again if he makes the mistake of fighting Marquez for a 5th time.

Mayweather Jr. told Doghouseboxing.com “When you get knocked out like that, pretty much everything is over…Pacquiao is not going to be the same fighter he was…If he fights Marquez again the same thing could happen.”

It definitely could happen.

Pacquiao doesn’t think it will, but then again this is the common response for fighters that have been knocked out like he was. They often think they can go back in the ring and fight like they did before the knockout, but many of them quickly find out that they can’t take heavy shots like before without getting knocked out.

Pacquiao is going to find out if he’s one of those fighters. He thinks he can fight like he did before, but he better focus on trying not to get hit too many times by Marquez because this guy is hitting really hard right now and I don’t’ think Pacquiao is prepared for that kind of power. Pacquiao has been used to not getting hit a lot because of his many mismatches.

Marquez found it easy to hit Pacquiao, and with his power he could put Pacquiao out cold again.
Mayweather Sr. doesn’t see Pacquiao doing much more in the sport after the KO. He sees it as being very difficult for him to be able to come back after this because the chances are that he’ll get caught again and we’ll see him knocked out again.