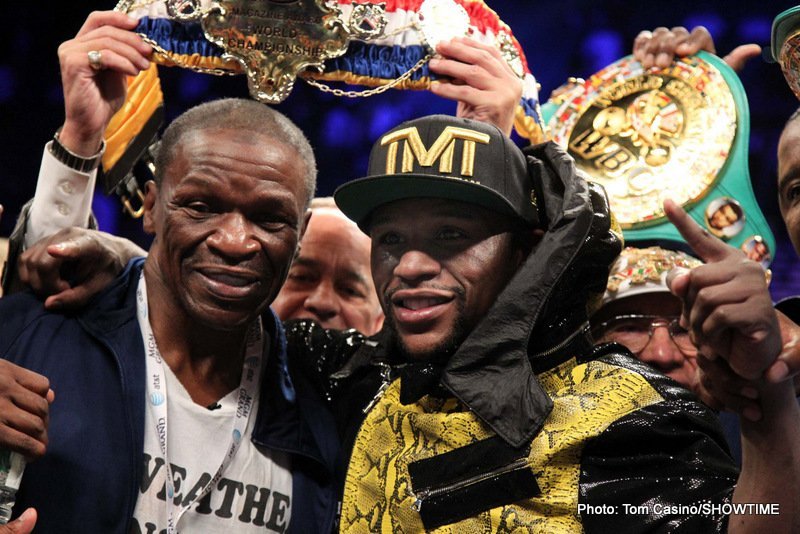 Once he has fulfilled his Showtime TV deal, Floyd Mayweather Snr has spoken out to the Telegraph in Britain to suggest his son should retire very shortly.

Mayweather Jr, on fight 5 of his 6-fight TV deal, plans to do just that in September, win or lose against Pacquiao, although losing certainly isn’t an option for “little Floyd” in his quest to become “The best ever.”

“I hope he walks away after this fight. This is a gambler’s game and I don’t think that Floyd should be gambling too much”

Many have questioned the tactics of Floyd employing his father in the corner as opposed to his more decorated Uncle, “usual” trainer Roger.

Britain’s Ricky Hatton, who was trained by Snr for his own fight with Pacquiao back in 2009, was particularly vocal, telling Sky Sports that he felt that there was a lack of focus from Mayweather Snr, also criticising his ability to correctly do southpaw pad work.

Mayweather Snr, who has been unfazed by criticism, has been trading verbal barbs with Pacquiao’s trainer Freddie Roach in the build up to the fight.

Of the richest fight in the sport’s history and the record-breaking 9 figure sum his son is set to earn, he said;

“Once you reach that pedigree and earn that kind of money then there is no need for you to fight no more. ”

However, acknowledging the risk his son faces in arguably his most dangerous foe, he said;

“Whenever you get in that ring, anything can happen. It looks easy but believe me – it ain’t as easy as it looks. He (little Floyd) just makes it look easy.”