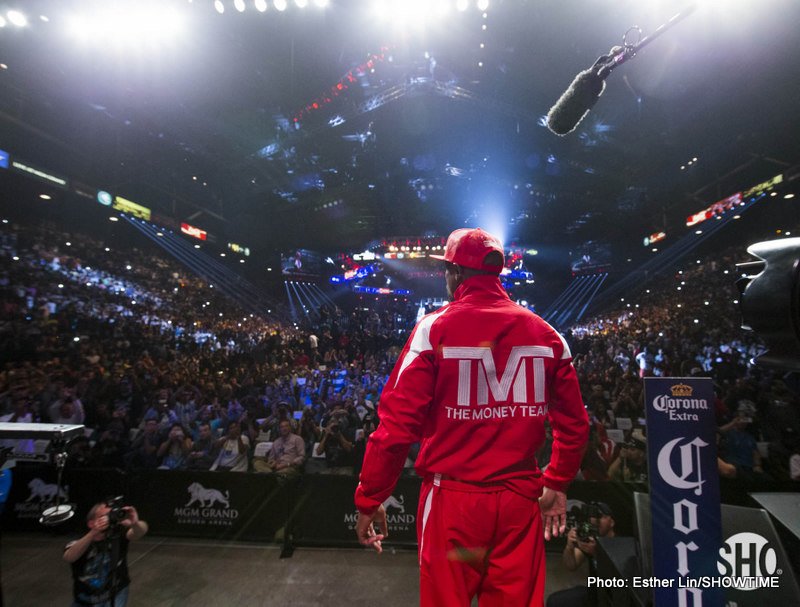 Superstar Floyd Mayweather Junior, who has recently been embarking on a “Victory Tour” of the UK, may soon be travelling to these shores on a regular basis. As per an exclusive by Gareth A Davies of The Telegraph, Mayweather’s Mayweather Promotions and Eddie Hearns’ Matchroom stable will join forces to co-promote shows in the UK – specifically matching fighters from the two outfits together.

Leonard Ellerbe, CEO of Mayweather Promotions, spoke with Davies about the exciting plans for the future:

“Floyd Mayweather and Mayweather Promotions have formed a partnership with Eddie Hearn and Matchroom Sport to hold a series of fights in the UK matching our guys against his guys – and other fights – and we have had some great discussions,” Ellerbe said. “We are looking to implement this as soon as possible. We think it’s a great idea to partner with the biggest promoter there to bring some big events to the UK. Floyd intends to be there at all of them. Mayweather Promotions is looking to partner with Matchroom and however that needs to be done we will make it happen. We think it’s a tremendous idea to bring our fighters there. Timeline wise it seems very feasible to have the first event by the summer.”

Ellerbe also told Davies how the man known as “Money” may even apply for a promoter’s licence with the British Boxing Board of Control. Also, Mayweather is looking to sign up more British fighters.

The planned cards, or events, would likely prove interesting as long as the match-ups are as close to 50-50 fights as possible. We don’t want to see Mayweather’s fighters taking on overmatched British fighters. Hearn of course has a big deal in place with Sky Sports, who showcase his cards, and it will be interesting to see if any or all of the planned Mayweather/Hearn cards will go out on regular Sky Sports or on the box-office, pay-per-view platform.

But surely, having the biggest name in boxing over in the UK promoting fights is a great idea. Ellerbe said it would be great to see Mayweather fighter Ashley Theophane come back to the UK “once he beats Adrien Broner.”

Broner is the massive favourite entering that particular fight, however, and that may prove to be one step too far for a Mayweather fighter.